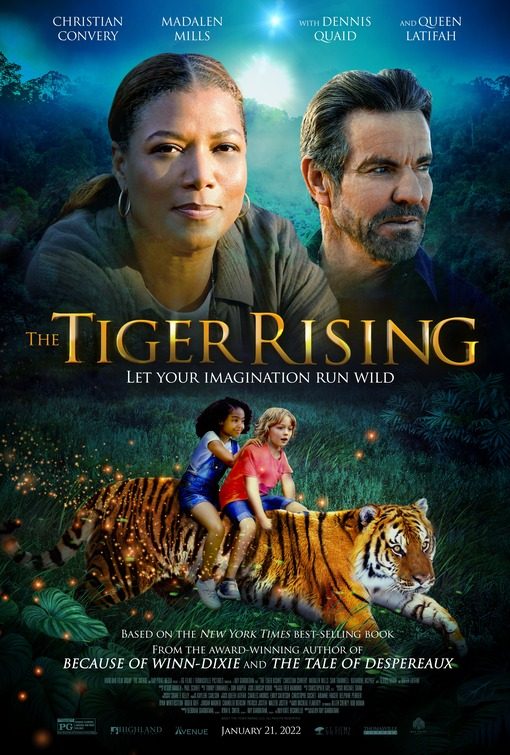 THE TIGER RISING is an adventure movie based on the New York Times best-selling book by Kate DiCamillo. The story follows the adventures of 12-year-old Rob Horton as he and his father struggle to make a new life for themselves at a motel in Florida. Their lives turned upside down when Rob’s mother died unexpectedly. However, Rob holds on tight to the memories of his mother and everything she gave him, like a flowing imagination. While his father is loving, he’s stressed trying to make ends meet, so Rob has lots of free time. Horton finds a tiger in a cage in the forest behind his motel and is faced with a moral dilemma. Should he set the tiger free?

THE TIGER RISING has a strong moral worldview about friendship, perseverance and doing the right thing, no matter what. Despite the heavier themes of grief and loss, the movie focuses on Horton’s fun imagination and his budding friendships. However, THE TIGER RISING contains some brief foul language and a violent scene that could upset some viewers. So, MOVIEGUIDE® advises caution for younger children.

(BBB, L, V, M):
Dominant Worldview and Other Worldview Content/Elements:
Very strong moral worldview where characters learn that grief is not overcome by anger, but through love, kindness and friendships, with strong parental figures, an emphasis on doing what is right, no matter the cost, and compassion is showed towards people who are evil
Foul Language:
Contains a few obscenities like “d” words
Violence:
Some bullying at school, a man uses a gun to kill a tiger in self-defense, some blood is shown, conversations about a woman dying, and some hospital scenes
Sex:
No sex
Nudity:
No nudity
Alcohol Use:
No alcohol use
Smoking and/or Drug Use and Abuse:
No smoking or drugs; and,
Miscellaneous Immorality:
A rebellious and angry child defies authority often and is rude to her peers, but however, she eventually learns that anger will not solve her problems, the scene where the tiger is killed is intense and could frighten younger viewers.

THE TIGER RISING is an adventure movie about a 12-year-old boy and his adventures after he finds a tiger locked in a cage behind the motel where he lives. THE TIGER RISING has a strong moral worldview about friendship, perseverance and doing the right thing, no matter what, but it warrants caution for younger children because of brief foul language and violence.

Rob Horton and his father are struggling to get their feet underneath them after the death of Rob’s mother. They move to Florida, and Rob must adapt to a new school and new surroundings.

However, Rob has trouble paying attention in class due to an active imagination and an eye for art like sculpting and drawing. In a flashback, the movie reveals that Rob’s mother taught him how to carve wood statues of birds and people.

Rob is bullied at his new school because of his daydreaming and a rash he has on both of his legs. One day, however, the unexpected happens when Rob isn’t the only new student at the school. A young girl named Sistine joins Rob on the bus. Sistine draws the bullies’ attention away from Rob for a time, but even Sistine doesn’t want anything to do with him.

The rash on Rob’s legs isn’t contagious, but the principal decides it would be best for Rob to take a few days off from school to let the medication take effect. Rob doesn’t mind the break, and he helps maintain the motel grounds to assist his father.

With Rob’s afternoons free, he explores the woods behind the motel where he finds a Bengal tiger locked up in a cage. As Rob’s curiosity for the creature grows, he finds the desire to want to tell Sistine. Sistine agreed to pass along the homework to Rob, but she’s still reluctant to treat Rob as a friend.

However, one day Sistine agrees to go with Rob and see the tiger for herself. Angry at her situation with her divorced parents and the change she has experienced in her own life makes her passionate about freeing the tiger. However, Rob talks her down, and they leave it alone.

Beauchamp, the cruel motel owner, eventually notices that Rob is home from school during the week. He underpays Rob’s dad and bribes the 12-year-old with a job – to feed the tiger. Beauchamp reveals that someone paid his debt to Beauchamp with the tiger, but that he himself doesn’t have time to take care of the animal.

Rob has no choice but to agree to feed the tiger behind his dad’s back because he doesn’t want to anger Beauchamp. Sistine wants to free the animal, but Rob fears the consequences. Armed with everything his mother taught him, Rob must make the most difficult decision of his young life.

THE TIGER RISING has a strong moral worldview about friendship, perseverance, and doing the right thing no matter what. Despite the heavier themes of grief and loss, the movie focuses on Horton’s fun imagination and his budding friendships. However, THE TIGER RISING contains some brief foul language and a violent scene that could upset some viewers. So, MOVIEGUIDE® advises caution for younger viewers.