"Hope Leads the Way into the Light" 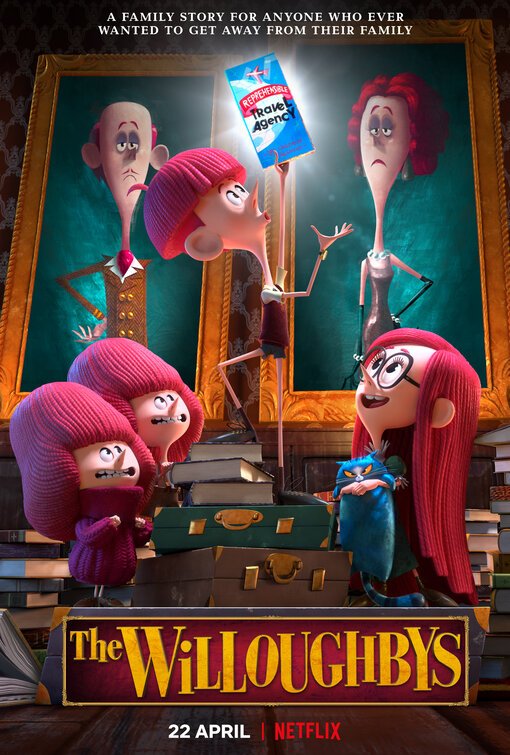 THE WILLOUGHBYS follows the animated story of four children born into the notable “Willoughby” family. The Willoughby name has been famous throughout history for aviators, explorers, poets, and scientists. However, the children’s self-centered parents don’t care about the family’s heroic tradition, or their children. The children come up with a plan to send their parents away so that they can be orphans and live on their own. Their plans change when a nanny enters their lives.

THE WILLOUGHBYS is entertaining and inventive, with great animation. The characters are fun and unique. That said, the movie loses sight of its premise in the middle, so it drags, but it soon regains momentum. Also, the movie has a great voice cast. Although the Willoughby children have selfish biological parents, they find new parents who love them. Also, the children do stick together. So, despite the bad mother and father, THE WILLOUGHBYS extols hope, determination, courage, love, and forgiveness. However, the movie has some dark and scary moments, negative portrait of parents and contains slapstick violence. Because of these negative elements, MOVIEDGUIDE® advises strong caution.

(BB, C, VV, A, MM):
Dominant Worldview and Other Worldview Content/Elements:
Strong moral worldview extols and promotes some moral and redemptive values, including hope, determination, courage, love, and forgiveness, plus a nanny adopts five children, a rainbow is a sign of hope, four children stick together as a family even though their parents don’t treat them well, and they forgive their parents for treating them badly
Foul Language:
No foul language, but a baby throws up and a boy wets himself when he gets scared in one scene
Violence:
Some slapstick and other violence includes father kicks his son into a coal room, a scary story in a dream, boy sliding down a bannister slows down and then falls down the last few remaining steps twice, children set traps in their house for people looking to buy their house, these people are shocked by electricity and punched by hidden boxing gloves on springs and fall through a trapdoor covered by a rug, an avalanche falls down a mountain and takes out a train, sheltered boy crossing streets causes several vehicle crashes, people almost freeze to death on snowy mountain, an implied shark attack
Sex:
No sex but a married couple kisses many times
Nudity:
No nudity, but nanny wears a low-cut dress
Alcohol Use:
Adults drink wine
Smoking and/or Drug Use and Abuse:
No smoking or drugs; and,
Miscellaneous Immorality:
Neglect, stealing, selfishness, lying, trickery, negative portrait of parents, and dysfunctional family.

THE WILLOUGHBYS follows the animated story of four children born into the notable “Willoughby” family, but their self-centered parents don’t follow the family’s heroic tradition and don’t care about their children, so the children must take it upon themselves to establish a new life. Inventive and entertaining, THE WILLOUGHBYS has a moral worldview that promotes friendship, hope, determination, love, and forgiveness, but contains some dark humor and slapstick violence that warrants caution for older children.

Narrated by the neighborhood cat, the movie introduces the Willoughby family, which consists of a mother, father, and their four children, Tim, Jane and their twin brothers, both named Barnaby. The feline narrator warns viewers at the start that if they’re looking for a nice story about a family that loves one another and sticks together, this isn’t the movie for you. The Willoughby children come from a long line of brave explorers, scientists, philosophers, kings, poets, and soldiers, but their selfish father is totally unlike his ancestors, all of whom were proud of their big red moustaches. Their father and mother are so passionate about one another that they have no love or time left for their children. However, the children still have determination, imagination and hope, the cat says. Tim, the eldest, wants to return the family to the great traditions of his ancestors, all of whom had elaborate red moustaches. Jane hopes for a better life at the end of the rainbow. However, they need a little help.

One night, the cat encourages a passerby carrying a box to lay the box by the Willoughby gate. Jane finds the box and decides to open it. Inside is a baby orphan. Jane decides to take the child, but when the mother and father find out, they kick out all the children, including the baby. With the others behind her, Jane follows a rainbow in the sky, and it turns out to be a manufactured sign that leads to a mysterious candy factory named Melanoff’s. The creator of the candy factory, Commander Melanoff, agrees to take in the child as his own. Although Jane is sad, Tim is happy, because the Commander has a magnificent sky blue moustache.

The Willoughby children return home and decide they should become orphans so that they can find a new home. They make a fake travel brochure for the most dangerous places in the world, hoping that their parents won’t survive so that they will be orphaned. Their mother and father set out on the adventure, but hire a nanny for the children.

The nanny arrives. She shows the children love and affection, but Tim struggles with having a parental figure in his life. The nanny finds out about the orphaned baby, but she gives Commander Melanoff instructions on how to take of the baby. A misunderstanding between the Tim and the nanny, however, leads Tim to call the orphan patrol on her. The nanny runs away, and the children get put into separate homes. Will the children ever see each other again?

THE WILLOUGHBYS is entertaining and inventive, with great animation. The characters are fun and unique. That said, the movie loses sight of its premise in the middle, so it drags a little bit, but it soon regains its momentum. Also, the movie has a great voice cast. Ricky Gervais plays the sarcastic cat narrator. Other notable cast members include Terry Crews, Maya Rudolph, Will Forte, and Martin Short.

Although the Willoughby children have selfish biological parents that treat them poorly, they find new parents that love them. Also, the children eventually do stick together, which leads to a happy, poignant ending. So, despite the bad mother and father, THE WILLOUGHBYS extols family, hope, determination, courage, love, and forgiveness. However, the movie is sometimes dark, has some scary moments and contains some slapstick violence. Because of these and other negative elements, not the least of which is the negative portrait of parents, MOVIEDGUIDE® advises strong caution for older children.