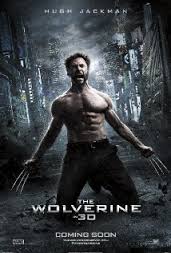 THE WOLVERINE is the sixth film in the X-MEN franchise. It tries to take a deeper look at one of the most popular mutants. Logan, the self-healing, claw-baring Wolverine, goes to Japan. There, he must protect a young woman, who’s heir to her grandfather’s industrial empire. During attacks on the woman’s life, Logan discovers his body is losing its ability to heal itself. He must overcome this weaknesses to stop this new evil force.

THE WOLVERINE tries to show a deeper, darker, more emotional side to Logan. Sadly, the filmmakers fail to do this on almost every level. THE WOLVERINE lacks substance and values, and the characters are weak and uninspiring. The movie also has a mixed worldview with several Buddhist elements. Also, the characters act immorally. That said, Logan does fight evil and is always willing to sacrifice himself for others. This redemptive aspect of heroism aligns with the biblical worldview of standing and fighting for others. Ultimately, however, THE WOLVERINE is marred by some gruesome and even graphic violence, implied sexuality, and foul language. Movieguide® advises extreme caution for THE WOLVERINE.

(PaPaPa, FRFR, B, AcapAcap, LL, VVV, S, N, A, MM) Strong pagan worldview with false Eastern mysticism, Buddhist rituals, Eastern traditions, fortune telling, and superstitious beliefs allowing for immoral behavior, one bad guy states that mutants are “God’s mistake,” a slight biblical worldview about fighting evil, even if you have to put oneself in danger to do so, the main character also learns to appreciate the life that he has and to use it for good, and honor and respect for one’s parents is promoted, but this value is contradicted in the end, plus an anti-capitalist element where the antagonist makes a point saying she’s a capitalist; 15 obscenities (including one “f” word) and one profanity; very strong action violence includes soldiers killing themselves with swords, a whole city is nuked and Logan’s grotesquely burned body heals itself, a man’s hand is stabbed into a table with an arrow, a man’s throat is stabbed with a pen, lots of action violence involving swords and Logan’s claws, with men getting stabbed, sliced and shot by bullets and arrows, many times with gore, a mutant spits acid on people’s faces to burn them, a man is hit by a car, Logan is forced to cut open his chest and reach inside to fix his heart, Logan also gets stabbed, shot and sliced many times, and the wounds heal quickly, a girl tries to kill herself, a father tries to kill his daughter, and a daughter kills her grandfather; a man and woman lie in bed and kiss, implied fornication, and two woman in their underwear party with an engaged man in his apartment; upper male nudity, partial rear male nudity when a man bathes, a woman is seen in a somewhat revealing nightgown, two women are seen in their underwear, and a female doctor wears a dress that reveals her leg; Logan drinks several times and a scene takes place in a bar; no smoking or illegal drug references; and, for a movie supposedly about honor and respect, the messed-up family in the movie exhibits none of it, greed for power and immortality drive good people to darkness (though this is ultimately refuted), and main character has no problem having one night stands for no reason.

THE WOLVERINE is the sixth film in the X-MEN franchise. It tries to take a deeper look at one of the most popular mutants, Logan, the self-healing, immortal Wolverine. The movie’s somewhat of a mess – story-wise, character-wise, morally, and theologically.

Taking place after the events of X-MEN: THE LAST STAND, THE WOLVERINE begins with Logan living as a filthy mountain man in the Canadian wilderness. Logan is still haunted by the fact he had to kill his “girlfriend gone evil,” Jean Grey. Logan now wanders around aimless and depressed, with no purpose. Until, however, he’s approached by Yukio, a young Japanese woman sent by her boss to find Logan. Her boss is Shingen Yashida, a man whose life Logan had saved in World War II and is now one of Japan’s most powerful captialists. Yukio was sent to bring Logan to Shingen so he could say one last goodbye to Wolverine and thank him for saving his life.

Upon arriving in Japan, it’s revealed that the dying Shingen has ulterior motives for Logan. Shingen explains that his company has the ability to relieve Logan of his immortality. This would finally give Logan the normal life he’s always wanted. Logan grows suspicious of the circumstances and refuses Shingen’s offer. That night, Shingen dies.

When Logan attends the funeral the very next day, he notices something is wrong concerning Shingen’s daughter, Mariko, heir to his industrial empire. He tries to warn her, but all of a sudden, gun-toting criminals posed as Buddhist monks crash the funeral and try to kidnap Mariko. Logan springs into action and starts taking bad guys out while getting shot several times in the process. Except, this time, his wounds aren’t healing very fast. Logan and Mariko barely escape with their lives. They must figure out who wants her dead and why Logan’s body isn’t healing itself.

THE WOLVERINE tries to show a deeper, darker and more emotional side to Logan. Sadly, the filmmakers fail to do this on almost every level. Logan’s character arc fails to show any substance or value that can inspire the audience. Also, the villain lacks logical motivation for his actions. Hence, his character becomes too incomprehensible. To make up for these character deficits, the movie simply relies on colorful visuals and intense action sequences. It thus fails to live up to the standards of the previous X-MEN movies, which are much better and were often awarded by MOVIEGUIDE(r) at our Annual Faith & Values Awards Gala & Report to the Entertainment Industry.

Set in Japan, THE WOLVERINE contains a lot of Eastern mysticism, showing Buddhist rituals and Eastern traditions. All this ultimately promotes a pagan worldview. Some of the plot elements rely on the idea of the transmigration of the soul and a Japanese woman who sees the future. Also, the main characters make immoral, illogical decisions. Logan doesn’t seem to have any moral code other than, “Don’t hurt my friends.” This lack of immorality is shown when he sleeps with the woman he’s trying to save, for no reason at all. Worse than that, he dreams of Jean when he is with the other woman.

That said, Logan is always willing to fight the bad guys and even risk his own life to do so. This aspect of heroism does align with the biblical worldview of standing and fighting for others, but it’s ultimately marred by some gruesome and even graphic violence, implied sexuality, and foul language. So, Movieguide® advises extreme caution for THE WOLVERINE.