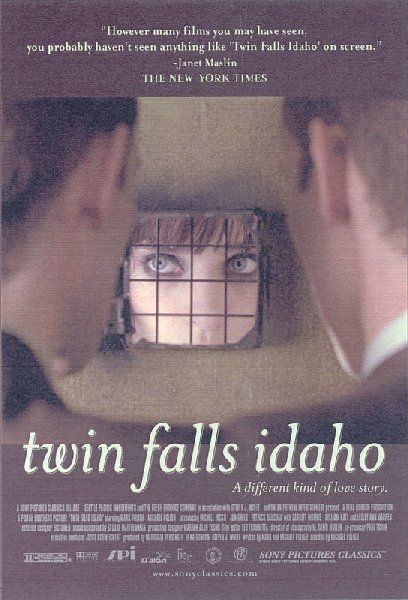 In TWIN FALLS IDAHO, two Siamese twin brothers argue when one of the brothers falls in love with a prostitute trying to leave the profession and the other one becomes increasingly sick. This uneven movie approaches the sensitive topic of Siamese twins in a mostly reserved manner, despite some strong foul language and a few crude sexual references and innuendoes.

Many independent movies like to push the envelope by dealing with taboo subjects. TWIN FALLS IDAHO approaches the sensitive topic of Siamese twins in a mostly reserved manner, despite some strong foul language and a few crude sexual references and innuendoes.

Conjoined Siamese twins, Blake and Francis Blake, arrive in an unnamed city searching for their birth mother who gave them up for adoption. Staying in a dingy hotel, they hire a pretty young prostitute named Penny on their birthday, but Penny runs out on them without performing any sexual acts. She forgets her purse, however. When she goes back to retrieve it and make a phone call, she begins a friendship with Blake that eventually turns to love. She even gets a doctor friend of hers to examine Francis, who has the flu in the beginning of the movie.

Meanwhile, the twins’ mother refuses to let them in her apartment. Then, Penny invites the young men to a Halloween party and lets them stay overnight at her apartment, where her friendship with Blake deepens. By this point, the movie lets the audience know that Penny wants to stop prostituting herself to make ends meet. Near the end of the movie, it shows her in a waitress uniform.

Penny’s relationship with Blake makes Francis jealous, however. Back at their own dingy hotel room, Blake and Francis argue and fight. Francis accuses his brother, “You always fall in love too quickly.” It also becomes clear that Blake resents having to take care of Francis, who has a weaker heart. A health crisis occurs the next day with Francis, bringing the whole situation to a head. Penny’s medical friend tells her that he thinks Blake cannot survive emotionally without Francis, even if Francis never recovers and dies. He says, “If you cut (a $2 bill) in half, the bill loses all its value. I’m sorry, Penny, if my diagnosis lets you down.” Penny, however, recalls Blake told her that no story really has a sad ending: “The sad ending is because the author stops telling the story. In time, every sad ending will become happy.”

Co-written by Mark and Michael Polish and directed by first-time director Michael Polish, TWIN FALLS IDAHO has several moral elements to commend it, despite its subject matter, foul language and references to Penny’s prostitution. For instance, Blake takes care of his sickly brother Francis, and Penny shows compassion for both men when she gets over her initial disgust. None of the characters sees God in their situations, however. There’s even a comment about “Mother Nature” being responsible for making Siamese twins. As used in the movie, this comment seems to be a materialistic euphemism. Thus, the movie has a mild humanist worldview overall. In fact, the filmmakers, the Polish brothers, seem downright afraid to delve into the possible spiritual and religious implications about Blake’s comment about sad endings versus happy endings.

Artistically, TWIN FALLS IDAHO is unnecessarily slow, as are many independent movies. Also, the characters and character development are ultimately uninteresting, even the conjoined twins, Blake and Francis. At one point, the twins sing a nice, clever duet and play the guitar together. At another point, Penny runs into a little person who was with the Falls brothers when they toured in carnivals. The woman tells Penny that she should have seen them perform, because “they were the best in the show.” The rest of the time, however, Blake and Francis do not seem so outgoing, despite the little witticisms they sometimes utter.

Thus, the movie leaves an interesting, entertaining aspect of their life virtually unexplored. Perhaps the filmmakers didn’t want to exploit their handicap, but why film such a story in the first place? Also, if you want people to see an interesting, compassionate story about conjoined twins, why not eliminate the sleazy background plots, foul language and other crudities so that you can gain a bigger audience? Is popular entertainment that much of a sin in the world of independent films?