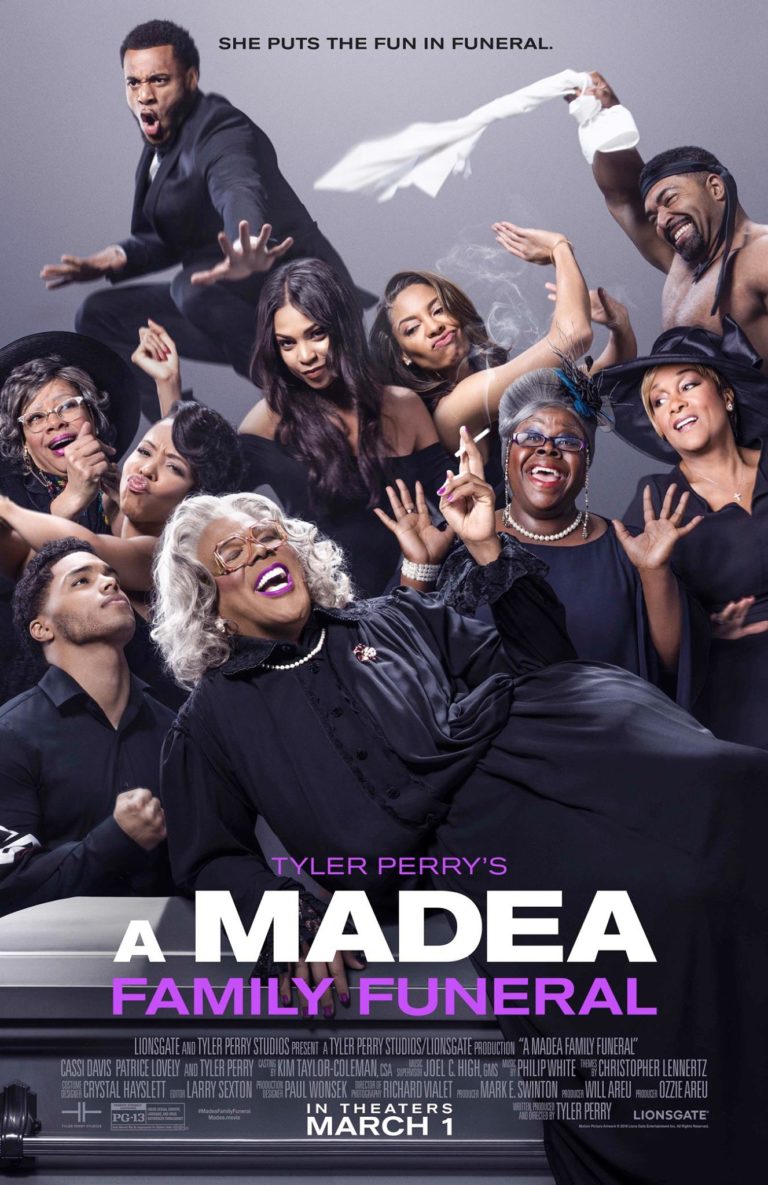 In TYLER PERRY’S A MADEA FAMILY FUNERAL, Madea, her brother Joe, Joe’s son, Brian, and two of Madea’s friends attend an anniversary party for two distant married relatives, only to have the man drop dead during a secret hotel rendezvous with his young mistress. Madea tries to keep her crazy brother and friends from spilling the beans to the widow. Meanwhile, the widow’s son is cheating on his own wife with his younger brother’s fiancée. The widow then asks Madea to plan a quick funeral for her dead husband. Will the family secrets come out?

A MADEA FAMILY FUNERAL veers between crude situation comedy and soap opera. The Christian background of Madea and her extended family only serves as a backdrop to make crude, unfunny, tasteless jokes. At the end, when all the family secrets are revealed, Madea attempts to impart some advice to her relatives. She presents a mixed bag of pop psychology, feminism and Romantic nonsense about personal empowerment. The mixture is pretty much divorced from any biblical truth or values. Media-wise viewers should skip A MADEA FAMILY FUNERAL.

(PaPa, FRFR, RoRo, FeFe, C, B, AbAb, LLL, V, SS, N, A, DD, MM):
Dominant Worldview and Other Worldview Content/Elements:
Strong mixed pagan worldview featuring antinomian behavior, Romantic and feminist sounding notions of personal empowerment, mixed with some light Christian, moral references to God, church and worship, but the Christian elements only serve as a backdrop to make crude, unfunny, often tasteless jokes, including jokes about prostitution, sadomasochism and the like;
Foul Language:
136 obscenities (mostly “h,” “d” and “a**” words with one “f” word), one GD profanity, six light profanities, several references to urinating and incontinence;
Violence:
Light comic violence include elderly woman hits two other elderly characters in the mouth before they spill a family secret, man is hit in mouth, and his false teeth fall out, man in wheelchair, comic threats of violence, and talk about trying to evade police;
Sex:
Implied adulterous sex in one scene, implied sadomasochistic adultery, references to older man’s longtime adulterous behavior, dead man’s past conquests attend his funeral, and many crude jokes about sex include jokes about prostitution, pimping, oral sex, lust, sexual prowess, sadomasochism;
Nudity:
Upper male nudity in several scenes, and woman lies in bed wearing her bra and panties in one scene;
Alcohol Use:
Brief alcohol use;
Smoking and/or Drug Use and Abuse:
Smoking and comical references to marijuana use and selling drugs in the past; and,
Miscellaneous Immorality:
Strong miscellaneous immorality includes black driver’s aunt and father encourage him to evade police when a white policeman stops his car for an alleged traffic infraction, but he refuses, white policeman is overly agitated then suddenly very calm, lying, people hide family secrets, woman expresses resentment about her cheating husband but says she stayed married for their children, man has a tattoo on his face, woman has a tattoo on her lower back, elderly man seems proud of having been a pimp during a past period in his life, dysfunctional family.

In TYLER PERRY’S A MADEA FAMILY FUNERAL, Madea, her brother Joe, Joe’s son, Brian, and two of Madea’s friends attend an anniversary party for two distant married relatives, only to have the man drop dead during a secret hotel rendezvous with his current young mistress. A MADEA FAMILY FUNERAL is pretty stupid and has an annoying antinomian worldview with a slightly feminist subtext that only uses the Christian background of Madea’s family to make crude, unfunny, often tasteless jokes.

The movie opens with Sylvia, the daughter of Vianne and Anthony planning a surprise anniversary party for them. Vianne and Anthony show up early, and Sylvia and her younger brother, Jessie, tell them to come back that night. Anthony says he’ll take Vianne to church to do some volunteer work while he goes shopping.

Cut to Madea, her brother, Joe, Aunt Bam, and Aunt Hattie getting ready for the three-hour drive to Vianne and Anthony’s house. After some crude jokes and repartee, Joe’s son, Brian, stops by to pick them up. They finally get underway but are briefly waylaid by a traffic stop by a couple white policemen.

Brian takes Madea and her entourage to a nearby hotel, which causes Madea to complain why can’t they stay at a relative’s house like other black people do. At the hotel, they run into A.J., Jessie and Sylvia’s older brother, who’s just been cheating on his wife, Carol, with Jessie’s fiancée, Gia. Surprisingly, in the very next hotel room, Andrew has had a heart attack while having a sadomasochistic tryst with Renee, a family friend who was just over at Andrew and Vianne’s house helping Sylvia prepare the anniversary party.

Everyone ends up at the house to announce that Anthony’s been taken to the hospital, but at the hospital, Andrew doesn’t make it. The next day, Vianne asks Madea to prepare a quick funeral for her husband. Madea and her nephew, Brian, try to get Joe, Aunt Bam and Aunt Hattie to keep the secret about how Anthony died, but that’s easier said than done. Meanwhile, A.J. and Gia try to keep their own affair secret from the family.

A MADEA FAMILY FUNERAL veers between broad, crude situation comedy and soap opera. Madea’s brother, Joe, is constantly leering at the younger women and making crude jokes about his sexual prowess, his desire to satisfy his lust, and his past as a pimp. Madea keeps slapping Joe and Aunt Bam to keep them quiet about spilling the beans on Anthony. Other parts of the movie focus on the soap opera playing out between Anthony’s two sons, Jessie and A.J., A.J.’s wife, and Jessie’s fiancée. Meanwhile, A.J. keeps angrily asking Renee to leave, because he blames her for his father’s sudden death. The broad comedy returns at the church funeral for Anthony, where Madea tries to reign in people’s tendency to stretch out the funeral service throughout the afternoon.

Tyler Perry’s first few movies featuring his Madea character had a more serious Christian background. In A MADEA FAMILY FUNERAL, however, that’s gone by the wayside. Thus, the Christian and church background of Madea and her extended family only serves as a backdrop to make crude, unfunny and tasteless jokes, even at the crazy funeral. At the end of the movie, when all the family secrets are revealed, Madea makes an attempt to impart some advice to her relatives, including A.J., his wife, and his mother. A.J. says he wants to change his behavior, but Madea tells him he should try to get some counseling if he truly wants to change. Meanwhile, she tells his wife and mother they need to seek their own happiness without relying on a man or focusing on the needs of their children, as the mother had done.

So, in the end, A MADEA FAMILY FUNERAL presents a mixed bag of pop psychology, feminism and Romantic nonsense about personal empowerment. The mixture is pretty much divorced from any biblical truth or values, including the kind of truth and values we find in the practical divine wisdom of the Book of Proverbs. To quote Proverbs 3:33, “The Lord’s curse is on the house of the wicked, but he blesses the home of the righteous.”