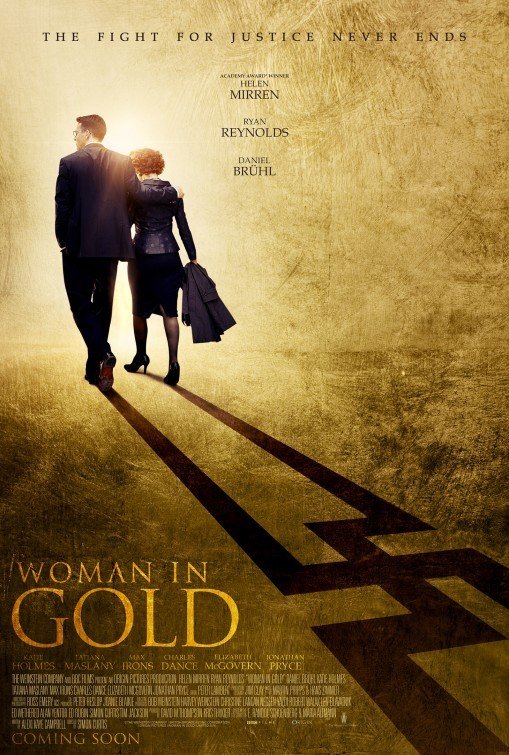 WOMAN IN GOLD is based on a true story about an elderly woman who fights to win recover her family’s stolen art treasure. Maria Altmann finds out the Germans stole her family’s painting during World War II, but the Austrian government has it. She decides to win it back. Maria appoints her friend’s lawyer son, Randol, to help. Randol also has a strong tie with Austria, because his grandfather was a famous composer there. What he and Maria don’t realize is that Austria’s justice system isn’t as accessible as America’s.

WOMAN IN GOLD is superior but a bit slow. Helen Mirren does a wonderful job as Maria, as does Ryan Reynolds as Randol. WOMAN IN GOLD has a strong moral worldview honoring family, private property and what’s right. It also shows that America is about freedom, peace and justice. The movie reminds viewers not to forget the history of the Jewish Holocaust. Throughout her whole ordeal, Maria stays kind in the midst of people who can’t admit they’re wrong. WOMAN IN GOLD does have some brief foul language, so caution is advised.

(BB, PP, CapCap, L, V) Strong moral worldview supporting fighting for what is right in a kind and loving way, with a positive family portrayal that honors family, strong Pro-American content showing America is about freedom, peace and justice, and strong capitalist elements supporting private ownership, plus a Jewish wedding celebration and family is confined because of being Jewish in WWII, which is of course considered a great evil; two light obscenities, one “f” word, and one profanity; light violence includes National Socialist harass and chase Jews in flashbacks, threatening violence, plus references to the Holocaust that murdered millions of Jews, plus millions of other people from Non-German nationalities; no sexual content but married couple seen sleeping; no nudity; no alcohol use; no smoking or drug use; and, nothing else objectionable.

WOMAN IN GOLD is about a woman who fights to win back her family’s stolen art treasures from the Austrian government, which retained them after the Allies defeated Hitler’s Germany in World War II. WOMAN IN GOLD is a Pro-American, pro-capitalist movie with a strong moral worldview, but it’s a bit slow, and there’s brief foul language requiring some caution.

The movie opens in America decades after World War II, where Maria Altmann’s sister has just passed away. After reading her sister’s will, Maria finds out her family’s painting was stolen by Hitler’s government controlling Austria during World War II. Her family had commissioned famous painter Gustav Klimt to paint a portrait of Maria’s Aunt Adele. Maria decides she wants to fight to get the painting back and asks her friend’s son, a lawyer named Randol, to help.

At first, Randol isn’t excited about the case, but he discovers the painting is worth $100 million. Randol convinces his firm to let him take on the case because of the worth of the painting. So hurt from what happened in Austria, Maria is resistant to going back, but Randol finally convinces her she must go back in order to fight for the painting.

The two arrive in Vienna and each street reminds Maria of her past. Flashbacks to growing up with her Aunt Adele and family come to Maria as she walks the city streets.

A young man approaches Randol and Maria who had seen in the paper that Maria was speaking at the restoration forum. The man tells Randol and Maria he can help them with the project, even though it will be very difficult to go against the government. The young man is able to introduce Randol and Maria to someone who works at the Belvedere Palace, where the painting has been on display for years and has become a national treasure known as “The Lady in Gold.”

At the palace museum, Randol and Maria look through archival papers and find Aunt Adele’s own will. This helps them produce some compelling arguments. So, when Maria presents them at the restoration forum, they gain some interest. In private, however, government officials tell them they can’t have the painting back.

The two feel defeated but realize it was a hard task anyway. So, they decide to return to the United States. First, however, Randol and Maria stop at the Holocaust monument in Vienna. Randol breaks down remembering the Holocaust victims, including his famous grandfather, the famous Jewish composer Arnold Schoenberg, who had to flee Germany in the 1930s because of the Nazis.

After returning back to the states, the two feel proud to be living in a free country, but are still saddened by their defeat. Months pass, and Randol has an inspiration that just may help them win back the painting.

WOMAN IN GOLD is well made but a bit slow. The plot and story are clear but there are scenes that could have been edited, including some of the flashbacks. Helen Mirren does a wonderful job as Maria, as does Ryan Reynolds as Randol. The movie is also beautifully shot.

WOMAN IN GOLD has a strong moral worldview. The main characters are fighting for what is right (their private property!) and honoring their family. The movie is patriotic and shows that America is about freedom, peace and justice. Also, the movie reminds viewers they can’t forget history. The main character is Jewish and her family was wronged by the Hitler’s National Socialist government in Austria. Even though Maria’s father had worked hard to make the family successful and cultured, the Nazis took everything from them. Throughout it all, however, Maria stays kind in the midst of those who refuse to admit the wrong they have done.

Rent or Buy WOMAN IN GOLD: