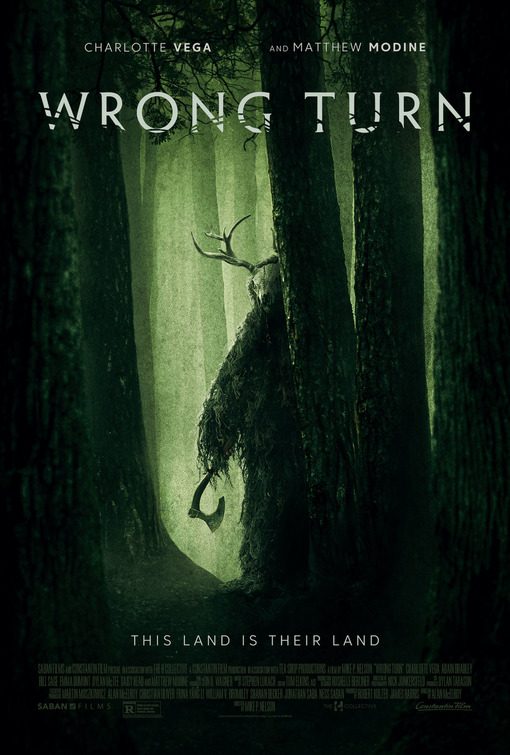 WRONG TURN is a reboot of a 2003 horror thriller. Six young adults go hiking along the Appalachian Trail, but don’t listen to warnings about staying on the main trail. They soon must defend themselves against a vicious pack of mountain dwellers, who’ve kept their communist community isolated since 1859. Three of the friends are eventually killed, and one is blinded, but the heroine in the story convinces the leader to let her and her boyfriend join the community. Meanwhile, her father comes looking for her two weeks later.

The new WRONG TURN is an intense, well-written horror thriller with several major plot twists and well-drawn villains. It has solid performances by the young cast and veteran Matthew Modine, who plays the heroine’s brave, loving father. Except for their penchant to mete out brutal frontier justice, the beliefs of the villains are left rather vague. At one point, though, the leader says his community works together and shares everything, so basically, they’re communists. WRONG TURN is marred by many “f” words, very strong bloody violence, politically correct homosexual references, and other immoral behavior.

(B, Co, ACAC, PaPa, PCPC, HoHo, LLL, VVV, S, N, A, D, MM):
Dominant Worldview and Other Worldview Content/Elements:
Light moral elements in horror thriller about a young heroine battling an brutal, isolated mountain community along the Appalachian trail where the lead villain metes out harsh justice and, at one point, says his community works together and shares everything, so the movie has a strong implied anti-communist subtext, and the heroine at a couple key moments raises thoughtful questions about what is a proportional moral response to the attacks upon them, rather than the movie having a blind acceptance of violence at all costs, and she tries to talk peace and justice to the community’s leader and the other leaders (most of whom are male), but the heroine’s four friends seem to have a pagan, politically correct worldview, and two of her friends are male homosexuals, and her black boyfriend is rather politically correct, and he eventually joins the community, which has both white and black people in it, though the leaders seem to be all white
Foul Language:
At least 106 obscenities (mostly “f” words), several strong profanities, and several light profanities
Violence:
Several gruesome traps and fights result in bursts of graphic bloodshed, giant log rolls rapidly toward the protagonists, the protagonists run and tumble out of the log’s way, but log rolls over one man, and his smashed head is shown afterward, man is dragged by a chain into a dark pit in the ground, several spiked traps cause penetrative wounds in protagonists, one woman falls down a hole and gets gored through the chest deeply by a wooden spike, as woman begs for mercy from one of the attackers, but he points an arrow at her, and it’s implied he finishes her off, a protagonist uses a club to smash the skull of a villain into a bloody pulp (the swinging is largely implied, but the splattered gore is graphic, man uses a hot metal poker to burn out the eyes of another man (the scene cuts away from the actual burning, but the aftermath shot of his burned eye sockets is gruesome), a “mercy killing” occurs, man slashes the throats of a mother and two teenagers (it’s revealed a moment later that this was a fantasy scene), a villain’s death occurs off screen.
Sex:
Implied fornication when young woman climbs on top of her boyfriend in bed while a shadow watches them from outside the hotel window, two of the male protagonists are a homosexual male couple who kiss briefly once and hold hands in two or three scenes in an obvious politically correct attempt to “normalize” homosexual relationships, and girl offers herself to the isolated mountain community, and the leader takes her as his new wife because his first wife died accidentally
Nudity:
Brief upper male nudity
Alcohol Use:
Casual drinking in a bar scene
Smoking and/or Drug Use and Abuse:
Brief smoking but no drugs; and,
Miscellaneous Immorality:
One homosexual males is seen kissing a cross he wears around his neck before he goes to sleep, another friend on the trip mentions that this homosexual believed in an afterlife, and villains wear animal hides and animal skulls over their heads, with the leader wearing a horned skull.

WRONG TURN reboots the 2003 horror movie of the same name where six young adult friends have to defend themselves against a vicious pack of mountain dwellers along the Appalachian Trail, who’ve kept their rather socialist, communist community isolated since 1859. WRONG TURN is an intense, well-written horror thriller with several major plot twists, well-drawn villains and solid lead performances by the young cast and veteran Matthew Modine, who plays the main heroine’s father, but the movie contains very strong, often bloody, violence, some politically correct homosexual references, lots of strong foul language, and other miscellaneous immorality.

Alan B. McElroy re-envisions his 2003 movie in this new version, especially the villains. The movie opens with a worried father named Scott (Matthew Modine) driving through back roads and small towns of Virginia, seeking to find his daughter, Jen (Charlotte Vega), who’s been hiking the Appalachian Trail on a post-college trip with her boyfriend Darius (Adain Bradley) and four other friends. Scott hasn’t heard from Jen in two weeks and is terrified about her wellbeing. Matters are made worse when a small-town sheriff downplays Scott’s concerns and other townspeople appear to scoff at his daughter’s fate.

The movie jumps back to show Jen and her four friends passing through the same town two weeks earlier, running afoul of the uneducated locals by speaking like privileged liberals. Out on the trail, Darius suggests a side trek to find a Civil War fortress off the beaten path. Suddenly, however, dangerous traps and mysterious unseen people seem to be out to kill them.

Who’s behind the attacks and why? Can Jen and her friends survive the diabolical efforts of these unseen foes? Finally, will Jen’s father be able to save his daughter?

These questions make WRONG TURN a compelling drive through creepy cinematic backwoods. The movie features well-drawn characters and discusses moral dilemmas of how far revenge should go at several instances. The performances are all solid. The fact that the young actors are unknowns offers an additional strong point for the movie since viewers won’t automatically assume that an action hero will save the day. Particular praise should go to veteran actor Matthew Modine in his strongest role in many years as the loving and brave, yet vulnerable, father. That said, it does take a while before the five surviving young friends (one of the five is killed fairly early by a heavy rolling log, which may or may not have been an accident) actually meet the backwoods community, who call themselves The Foundation.

The movie has its gruesome moments, but the most brutal violence is usually only implied, though there are some gory images of the aftermath. For example, when the villains find out a stranger or one of their group has lied to them, they burn out their eyes and throw them into dark caves. WRONG TURN also has a profusion of “f” words throughout, especially in the scenes before the villains capture the young people. There’s also an implied sex scene where the heroine, wearing her underwear as bedclothes, climbs on top of her boyfriend. In addition, to save her life, the heroine offers herself to The Foundation, and the leader takes her for his new wife since his wife has died accidentally. Later, the movie shows them sleeping together.

The rebooted WRONG TURN also has some politically correct agenda-setting. For example, two of the young protagonists are a homosexual male couple shown holding hands at several points and briefly sharing a romantic kiss. Also, rather than being simple cannibals as in the original WRONG TURN movies, the villains here are a small, tightknit group of people who have lived away from society in their own mountain village since 1859 in protest of the social changes they view as immoral. This isn’t extensively developed, but at one point the village leader talks in communist terms of working together and sharing everything. Also, there’s nothing seemingly religious about his community, but neither is there anything particularly religious about Jen or her father. One of Jen’s homosexual male friends, however, kisses a crucifix before he goes to sleep in one scene. Also, after he suffers a gruesome death, one of the young adults (his boyfriend is too distraught) mentions the man’s belief in an afterlife.

Ultimately, WRONG TURN has some good plot twists. The movie delivers some entertaining, action-packed excitement. Also, the father is portrayed as a very positive figure. However, the movie’s politically correct homosexual content and its excessive foul language and brutal violence are unacceptable and warrant abhorrent.