"Living According to the Bible" 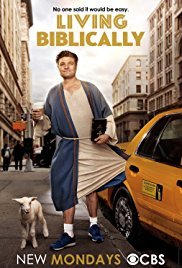 In the sitcom LIVING BIBLICALLY, airing on CBS, Chip is a lapsed catholic who works as a movie critic for a newspaper. When his childhood best friend dies, Chip’s life turns upside down. Chip’s wife, Leslie, announces they’re expecting a child. Chip realizes his life is a mess. Determined to do something about it, he goes to a bookstore to find self-help books, and ends up with a Bible in his hand. While holding that Bible, Chip has an epiphany. He’s going to do a nine-month spiritual cleanse by following everything in the Bible: every law and every rule. What could go wrong?

There’s a charm to LIVING BIBLICALLY as viewers watch Chip, who knows very little about the Christian faith, try to live according to the Bible, even though he doesn’t grasp the theology behind it yet. here are plenty of jokes about faith and religion, but it finds a great balance at not turning faith itself into a joke. It’s a funny show, but caution is advised for a smattering of foul language and other issues from time to time.

In the sitcom LIVING BIBLICALLY, airing on CBS, Chip is a lapsed Roman Catholic who works as a movie critic for a newspaper. When his childhood best friend dies, Chip’s life is turned upside down, and he kind of checks out on life. When Chips wife, Leslie, announces that they’re expecting a child, Chip is excited, but realizes his life is a mess. Determined to do something about it, he goes to the book store to find self-help books, and somehow ends up with a Bible in his hand. While holding that Bible, Chip has an epiphany. He’s going to do a nine-month spiritual cleanse by following everything in the Bible: every law and every rule.

When Chip tells this to a priest, Father Gene, he busts out laughing at such an idea, but Chip is serious about it. Along the way, Father Gene introduces Chip to his friend Rabbi Gil, and these two men become Chip’s “God Squad” as he tries to figure out how to follow the Bible. Inspired by his new challenge, Chip’s boss tells him to write a segment for the newspaper about his experiences of living biblically.

LIVING BIBLICALLY is inspired by the book THE YEAR OF LIVING BIBLICALLY written by Esquire magazine editor, A.J. Jacobs, as he tried to spend a year following the Bible as literally as possible. For Chip in the TV series, this even means throwing a stone at his adulterer co-worker because of the Levitical law in the Old Testament saying the maximum punishment for adultery is to be stoned. It also means not wearing mixed threads, which Chip learns in the first episode.

For Christians, who know basic theology and hermeneutics, they know that this is silly because much of the Old Testament laws were either designed for the biblical theocracy of Israel, or were ceremonial laws that anticipated the coming of the Messiah, Jesus Christ. For example, there’s absolutely no reason to start sacrificing lambs, because Jesus was the permanent sacrificial lamb on the Cross. When Movieguide® spoke with the series creator Patrick Walsh, he said that at the beginning of Chips journey, he’s merely following the Bible in a moralistic sense, and he asks the wrong questions, which the priest and rabbi try to correct. According to Walsh, later in the series, the faith begins to become more personal and more real to Chip.

There’s a definite charm to LIVING BIBLICALLY as we watch Chip, who knows very little about the Christian faith, try to live according to the Bible. His atheist wife sees that his new resolution is making him a better man and a better husband. There are also some genuinely sweet moments as Chip learns to pray and sees God answer his prayers. Then, program’s not hyper-theological, but it treats the Christian faith respectfully and places high value on it.

It should be noted that LIVING BIBLICALLY is a comedy. There are plenty of jokes about faith and religion, but the creators find a great balance by not turning faith itself into a joke. The comedy isn’t on the level of some other sitcoms, though, and the characters could be a little more likeable and personable.

Caution is advised, because there are some references to adultery and other immoral behavior, it’s implied that Chip’s boss is a lesbian, and there’s a splattering of light obscenities and profanities in each episode that MOVIEGUIDE® has reviewed so far (mostly an occasional “a” word, “d” word and some OMGs). Other than these objections, LIVING BIBLICALLY is actually a breath of fresh air in the sitcom arena on TV and is a show media-wise viewers should keep their eyes on while they focus on Jesus.

It should be noted that, as further episodes are released, there is the high likelihood that the series tackles Biblical passages from a more loose, liberal perspective. So, audiences should always be discerning when watching even a program with honest, positive intentions.