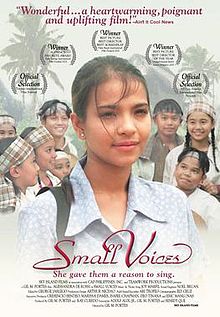 SMALL VOICES is about a young, idealistic teacher named Melinda (Alessandra de Rossi), who chooses to work in a small, impoverished village in the Philippines and enters her students in a singing competition. SMALL VOICES tries a little too hard to be inspirational, and the story argues that education and teachers are the real hope for children today.

(H, PC, C, B, FR, Ro, L, VV, MM) Humanist worldview about a new teacher in a tiny impoverished Philippine village who teaches, “We can only be sure of ourselves” with no political posturing in story, but one rebel is shown trying to improve life for his children and education is seen as more important than everything else as well as some Christian and moral elements such as villagers shown expressing their faith (implied Catholicism), praying, one woman encourages teacher to trust God, and bribery and corruption rebuked, Mormon missionaries shown walking through poor village, some Romantic messages taught to children, such as, “Follow your heart,” and teacher emphasizes importance of following one’s dream; two mild obscenities, a couple mild profanities (“for God’s sake” and “Mother of God”), and a few flatulence jokes; implied violence includes sounds of military conflict and shooting in the nearby mountains, two men found face down in creek, dragged to water’s edge (dead rebels left by military), later four men and boy left dead (faces ashen); implied bullet holes in dead men's shirts and few bloodstains, and talk about woman victimized by a recruiter in Singapore and women being beaten and abused as domestic servants, but nothing very explicit; no sex scenes or nudity, but a teacher confides that she is still a virgin and another references “a romp in the sack”; no alcohol or smoking; and, children show disrespect to “backward” parents, bribery and corruption rebuked, and a few references to luck.

SMALL VOICES is about a young, idealistic teacher named Melinda (Alessandra de Rossi), who chooses to work in a small, impoverished village in the Philippines. She immediately sees corruption and minor abuses by the other teachers at the small school, but refuses to participate even though offered bribes to do so. One teacher requires the children to buy ice cream from her so she can support her family in Manila, and another requires students to clean her house once a week after school. Still, Melinda desires to teach her young students and encourage them to dream of life beyond their poverty.

SMALL VOICES starts slowly, but captures village life exquisitely. A wealthy teacher may own a television and VCR, but she also must feed the large pig just a few feet away on her wooden porch. Most families are farmers and live meagerly. They still eat from a shared bamboo tray and live in straw shelters with only one room. In one family, the two sons must share the school uniform shirt since they cannot afford two. So, one boy races home to allow his brother to wear the same shirt to attend afternoon classes. SMALL VOICES offers a glimpse of rural life rarely seen by American families. It is poignant and touching to see how content these farming families live with so few material possessions.

Adjusting to this simple lifestyle, Melinda is informed that a man on a motorcycle is the village’s only real bank. Teachers cash their checks with him for a fee, rather than wait three months for a real bank to process their pay. They purchase other goods from him, as well. Farming families create a challenge for Melinda as they prefer to keep their children out of school so that they will help with routine chores and crop harvesting.

The rainy season wrecks havoc on the small school and funds are in short supply. Seeking new ways to raise money for the school, Melinda enters her class in a music contest. She struggles to keep all her students in attendance, fend off upset parents, and prepare the children for the competition. Unlike other wealthier schools, Melinda’s students must rely on home made costumes for the upcoming concert. Sadly, one young boy is killed when he convinces his father to spend the evening with him and the other rebels in the hills. The young boy’s body is found the next morning, along with his father and several other rebels. This devastates the village, causing Melinda to question whether she should even continue.

But, the tiny choir pulls together and travels to the distant competition. Once there, they sing from their hearts, assuring a heart-warming ending for the starkly depressed community. There are many small speeches with strong Romantic and Humanist themes: “Follow your heart,” “Respect each others’ dreams,” and “We can only be sure of ourselves.” Surely, many in the audience will tire of this intentionally-inspiring dialogue long before the story ends.

Most disconcerting of all, however, is the politically-correct notion about education. Parents who need their children’s help in the fields are seen as backward and not interested in their children’s futures. This is a simplistic approach to a poverty-stricken lifestyle. When one mother tells her child, “We know what’s best for you,” it is in direct contrast to the message the teacher and school are sending. The students pick up on these subtle messages and seem to be encouraged to be disrespectful to their parents.

The internationally-recognized need for education comes through loud and clear in this story. After all, funding to make this movie was, in part, from an educational consortium in the Philippines. Teachers are shown as helpless to compel the parents to do “what’s right.” Meanwhile, parents are shown saying, “It’s enough that you finished elementary” school, “You’re just a girl, anyway. You will only marry and have children, so you don’t need an education.” While moral moviegoers can recognize the importance of education and the options it offers, the story seems, at times, to hit them over the head with its education message.

SMALL VOICES makes up the inspirational choir and, in the end (through sub-titles), we learn the words to the competition’s selected song. It is about SMALL VOICES seeking their dreams and desiring “Peace, good bounty, and love to all.” Innocuous enough, but, added to the previous 90 minutes of preaching, we get it already. SMALL VOICES tries a little too hard to be inspirational. Still, it succeeds in tugging at your heart strings because the characters are passionate and their needy community deserves a small victory once in awhile.

If you can stomach the humanist leanings, Romanticism, and the themes of violence impacting a rural village, then SMALL VOICES may be a source of encouragement to you. Unfortunately, there are very few references to faith and spiritual hope. Villagers seem to have their religion, but it offers little joy in their daily lives. SMALL VOICES emphatically argues that education and teachers are the real hope for children today. When will they ever learn?