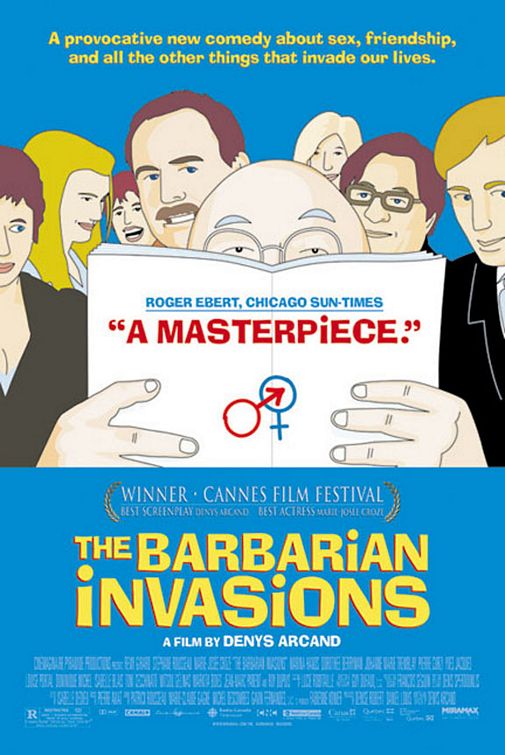 In the French movie, THE BARBARIAN INVASIONS, a man having a difficult time accepting his impending death tries to find peace in his last moments by spending time with his estranged son, ex-wife, ex-lovers, and old friends, who have come to a cabin to share his last breath. Though the world will appreciate this movie, Christian viewers may be sad that the dying man never gets introduced to Christ and dies without the gift of eternal life that brings true peace.

LES INVASIONS BARBARES, or THE BARBARIAN INVASIONS, is a French movie about the last days of a dying man. (Oh, goodie! We’ve only had the depressing death theme in THE HOURS, SYLVIA, HOUSE OF SAND AND FOG, THE MAGDELLINE SISTERS, THE HUMAN STAIN, with most of these preaching suicide as a viable option for sickness and despair.)

The movie opens with a son, Sebastian, coming to a lower class, overcrowded hospital to see his dying father, Remy. The father and son have been estranged for some time, and Sebastian is bitter that his father had numerous affairs while he was growing up and had left his mother to raise him and his sister. Remy has squandered his wealth, and Sebastian has become a millionaire through his international business dealings. Though Sebastian openly expresses his disdain for his father, he still jumps through hoops to call specialists across the world, set up his father in freshly-painted, private quarters on an abandoned floor of the hospital, and secure an illegal stream of heroin, which an overseas doctor has hinted will serve Remy better than morphine.

Sebastian takes his father to Baltimore. When an American lady welcomes them to the country, Sebastian says sarcastically, “Praise the Lord.” Remy says, “Hallelujah.” When it appears that the finest doctors and best hospitals can’t cure Remy of his terminal illness, Sebastian and his mother decide to bring the dying man back to France, to the cabin of one of his old friends. Sebastian secretly calls Remy’s old friends, which include two old mistresses, a homosexual couple, and a man who has married a very young, controlling woman and has had two babies with her. One of the mistresses has a junkie daughter who is able to secure heroin for Remy and administer it in a secret weekly rendezvous.

As death preparations are being made, and friends gather, Remy pontificates on life. When a Catholic nurse tries to move him toward God, Remy lashes out that history is full of atrocities of humanity that prove that there is no God. The nurse says that if that is so, surely there must be someone up there to forgive it all. (Pretty good theology!) Remy is bitter, though, and makes a disparaging remark about Mother Theresa. He calls her a slimy Albanian.

Remy speaks of himself as a communist and his early exploration of Marxist-Leninism. He and his friends laugh about all the “isms” that man has embraced throughout history – existentialism, Communism, Marxism, Marxist-Leninism, Catholicism, materialism, structuralism, intuitionalism, feminism, and the like. One of them insists that “cretinism” is the prevailing “ism,” with barbarians invading the culture they once knew and respected. They all laugh wildly, and one comments that it’s only the Arabs who have kept intelligence alive. The conversation quickly digresses into the intricacies of their various sexual exploits, including oral sex.

As the movie progresses, Remy digresses, and family and friends discuss the option of friend-assisted suicide. Remy likes the plan, but is still very fearful of death. He believes that, after he dies, he will cease to exist, he will be no more. No one counters his theology. He knows he’s been a heathen throughout his life, but he insists that he will have good company, if indeed, the nurse is right that he’ll land in hell. (Quite a prevalent thought in this country, too!) Nevertheless, Remy does everything in his power to make amends with his son, and the movie portrays several very touching moments, which audiences will love.

Though the movie has numerous drug portrayals and sexual conversations, the film is well crafted and well acted and should win many awards. Regrettably, as with the other depressing death movies recently out, or coming out soon, there is no mention of the only true life available to mankind – the redemption and hand of friendship extended through the death and resurrection of Christ Jesus. THE BARBARIAN INVASIONS is about restoration of family and unconditional love, which many viewers will like, but an exploration of death void of the promise of eternal life is dismal viewing, indeed.

SUMMARY: In the French movie, THE BARBARIAN INVASIONS, a man having a difficult time accepting his impending death tries to find peace in his last moments by spending time with his estranged son, ex-wife, ex-lovers, and old friends, who have come to a cabin to share his last breath. Though the world will appreciate this movie, Christian viewers may be sad that the dying man never gets introduced to Christ and dies without the gift of eternal life that brings true peace.