"A Tap Root into Evil" 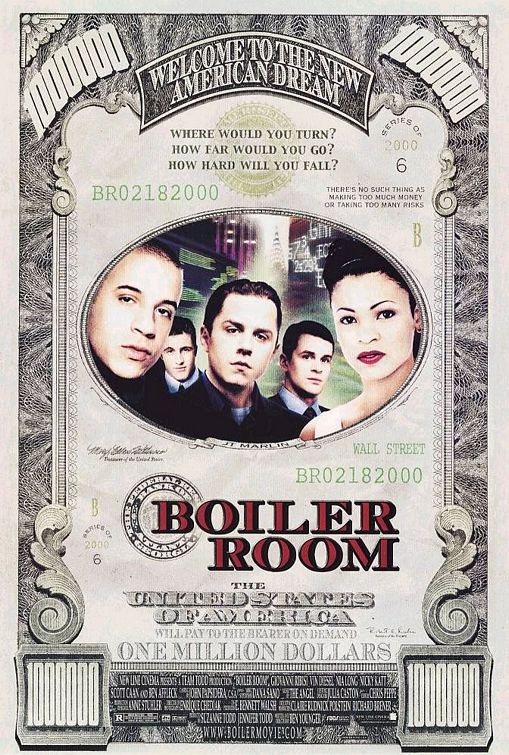 In BOILER ROOM, Giovanni Ribisi stars as Seth Davis, a ne’er-do-well who runs a gambling business from his seedy apartment. One of Seth’s customers offers him an opportunity as a broker at his small trading firm. The promise of sports cars, millions of dollars and plenty of women convince Seth to put aside his qualms. Eventually, Seth finds a way to repay a client he has most seriously wronged, a family man with a modest income, to get out of the corrupt firm before the Feds raid the operation.

Seth rights some of his wrongs, but his motives seem to pivot more upon winning his father’s love than upon moral ideals. BOILER ROOM seems to imply that all blatantly dishonest salesmen are likeable, average guys caught up in seductive lifestyle due to low self-esteem. To its credit, BOILER ROOM, like Seth, tries to do the right thing and condemns the fast living and dishonesty it dramatizes. It also honors father-son relationships and depicts a genuine love between Seth and his dad. A constant volley of obscenities, violence and sex make this movie a flawed expose of the dark underbelly of today’s frantic dash for cash.

BOILER ROOM is a fast-paced, hip-hop flavored look at the dark side of brokerage trading. This movie depicts what happens when brokers get a little too carried away with the heady sensation of closing a deal at the expense of honesty and integrity. Intended as a morality tale, BOILER ROOM falls short of its goal by flirting with the lifestyle it pretends to condemn.

BOILER ROOM stars Giovanni Ribisi (THE OTHER SISTER, THE MOD SQUAD) as Seth Davis, a shiftless ne’er-do-well who runs a gambling business from his seedy apartment. Seth’s father is a prominent New York City judge (Ron Rifkin). When he discovers his son has quit school and earns a living as a casino operator, he is understandably outraged. (There’s no explanation as to why Seth lives in the ‘hood when he has such a respectable background. This is the first of several inexplicable plot details.) So when one of Seth’s high-rolling customers offers him an opportunity as a broker at his small trading firm, Seth decides to leave his lucrative home-based business to an apprentice while he “goes legit” to please his dad.

When Seth arrives for his interview at J.T. Marlin, the aforementioned brokerage firm, he senses from the start that something is awry when his job interview seems more like a “Hitler youth rally” than a regular interview. However, the promise of big payoffs – sports cars, millions of dollars, plenty of chicks – within a year convince Seth to put aside his qualms. Soon he learns to trade like a pro and is convincing clients to sell their own mothers just to buy the stocks he proffers.

Regrettably, the selling methods at J. T. Marlin hinge upon blatant lying to these naïve clients and high-pressure sales tactics. Seth feels mildly guilty about the wrongs he’s committing, but soon becomes so addicted to the emotional high he feels after closing a deal that he forgets he’s suckering people for money. He’s also seduced by his new co-workers’ life in the fast lane. The boys from J. T. Marlin spend all their money on fast cars, fancy apartments and nights of partying at seedy bars, where they take great pleasure in slinging ethnic slurs and starting fights. Perhaps in an effort to find a less frenetic pastime, Seth embarks on a relationship with the office secretary, Debbie (Nia Long). This relationship seems to spring out of nowhere; the lovely Debbie’s attraction to Seth, a neophyte trader lacking maturity, integrity, money, personality, and especially looks, is simply baffling.

Even the joys of sex and money cannot obscure Seth’s supposed intelligence (we are supposed to believe he’s smart because the movie tells us so), and he soon deduces that J. T. Marlin is involved in some funny business. The commissions he’s earning on his sales are more than twice the legal limit, according to SEC regulations, but none of his co-workers can tell him why. Seth does a little detective work and finds that he’s working for a “chop shop”  – a company that sells stock for fake companies, thus artificially inflating the stock’s value just long enough for Seth and his pals to make a killing. Before Seth can get out of the business, his father discovers the truth about his son’s supposedly respectable job and essentially disowns his son. Desperate to win back his father’s respect and love, Seth must now figure out how to put his life back on the right track. He must find a way to repay the client he has most seriously wronged – a family man with a modest income (the others, apparently, are rich enough to be forgotten) – and to get out of J. T. Marlin before the Feds raid the operation.

Without giving away too much of the plot, Seth rights some of his wrongs in the end, but his motives seem to pivot more upon winning his father’s love than upon moral ideals. Throughout this movie, he never elects to do the right thing until he is caught. BOILER ROOM wants us to believe that Seth is a good boy caught in a bad situation, but this sympathetic image doesn’t jibe with his consistently scummy behavior (and the ease with which he perpetrates his deceit). His naïve, bald confessions of yearning for his father’s love seem overly innocent and even maudlin. BOILER ROOM seems to imply that all blatantly dishonest salesmen are likeable, average guys caught up in seductive lifestyle due to low self-esteem.

To its credit, BOILER ROOM, like Seth, tries to do the right thing and condemns the fast living and dishonesty it dramatizes. It also honors father-son relationships and depicts a genuine love between Seth and his dad. Unlike many modern movies, BOILER ROOM does not portray Seth’s dad as misguided and irrationally stubborn in his firm discipline of his son; instead, the judge is a strong, sympathetic character.

Interestingly, BOILER ROOM uses dialogue, plot and an excellent hip-hop soundtrack to liken day trading to ghetto hustling and drug dealing. It’s an interesting comparison, but, like many rap videos, this movie glamorizes the high-rolling lifestyle it wants to deplore. The viewer can almost feel the high these traders feel when they sucker another customer into sinking their money into a pile of bogus shares. The skillful cinematography, appealing sets and pulsating soundtrack perpetuate the sense of excitement until the day-trading life seduces the viewer, too, and suddenly the viewer is colluding with Seth’s actions instead of disdaining them.

Still, there’s no denying that this movie is entertaining and sometimes even thrilling, and its intentions are basically good. Yet, even the good intentions of BOILER ROOM to expose the dark underbelly of today’s frantic dash for cash are lost, in part because of the sex, violence and constant volley of obscenities – perhaps more than any recent movie.