"Delusional Lord of the Flies" 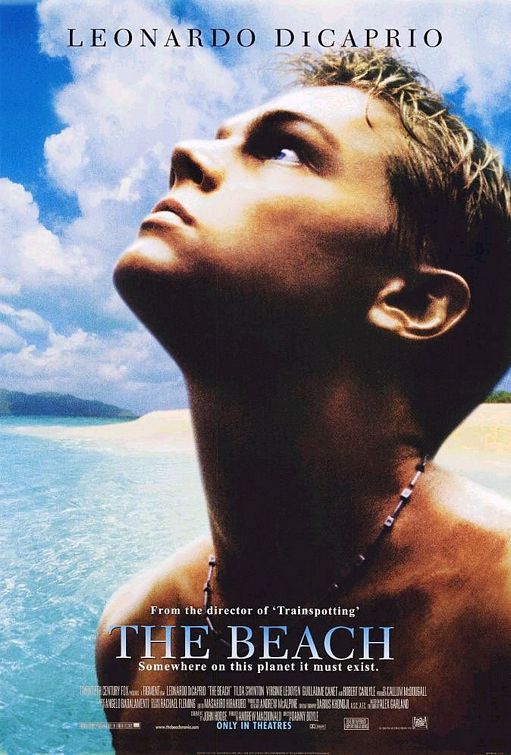 In THE BEACH, a delusional, hedonistic lord of the flies discovers and abandons paradise lost. Aging adolescent Leonardo Di Caprio plays Richard, who travels to Thailand to discover life. What he finds, instead, is a bunch of tourists looking for the ultimate trip and a morally corrupt hippie commune on a lovely secret island. The commune’s moral corruption, and Richard’s as well, eventually ends in sadomasochism, euthanasia and unrequited desire.

DiCaprio spouts lots of sophomoric pop philosophy in THE BEACH. To lessen the vacuous nature of these musings, a character jokes that American men spout philosophy just to pick up French women. It doesn’t take much of a theologian to pick up on the Christological references here, and there will be many who will get excited by the theological implications. However, the proof of the movie is in its ending, and in spite of its pop theology, THE BEACH does not denounce sin or hedonism, instead it may lead susceptible youth to want to find this mythical pagan resort with its sinful pleasures. Regrettably, the adolescents who are its target audience are the very people who should not see THE BEACH.

In THE BEACH, a delusional, hedonistic lord of the flies discovers and abandons paradise lost. Aging adolescent Leonardo DiCaprio plays Richard, who tells the audience in his opening voice over that he came to Thailand to experience life: “Keep your mind open. Suck in the experience. If it hurts, it’s probably a good thing.” What he finds, instead, is a bunch of tourists looking for the ultimate trip, and a lot of hurt.

Eventually after wandering around a tourist infested, immoral Bangkok, Richard finds a rundown hotel and meets a beautiful French girl, who then enters the next room with her boyfriend. Richard lies down on the bed in his broken down room, and listens to the French couple next door fornicating. Suddenly, their grunts and groans are interrupted by primal screams from Daffy, played with characteristic viciousness by Robert Carlyle. Daffy rips open a mosquito screen several feet above Richard’s head. Doped up and raving mad, Daffy gives Richard a joint. As Daffy describes a legendary island with fields of marijuana and a perfect, enclosed beach, Richard calmly tells Daffy, “You’re insane.”

The next day, Richard finds a map for the legendary island tacked to his door. When he goes to look for Daffy, he finds blood all over Daffy’s room, and Daffy on the floor, sliced up by his own hand.

After the authorities question him, Richard grabs the French couple, Françoise and Étienne, and suggests that they search for the legendary beach. Richard is in lust with Françoise, but he can’t get around Étienne. Yet.

After traveling through Thailand, the trio gets to the furthest point where a fishing boat will take them, and then they swim to the legendary beach. There, they find the fields of marijuana. What they were not prepared for is the fact that these fields are guarded by armed drug dealers. They barely escape the drug dealers to the other side of the island, where a hippe commune secretly resides on the legendary beach.

The commune is headed by a slightly older, blonde Australian woman named Sal. The hippies have made a deal with the drug dealers that they can stay on the island as long as nobody else comes. They grow their own marijuana to barter for supplies on the mainland. Regrettably, during his travels, Richard made a copy of the map and gave it to some loud and obnoxious pot-smoking, beer-guzzling Americans. However, true to his self-absorbed personality, Richard lies to Sal and swears that he told no one else about the island.

Eventually, he fornicates with Francoise and then goes back to the mainland on a shopping trip with Sal, with whom he also fornicates at her command. On the mainland, the Americans to whom he gave a copy of the map tell him they are going to the beach. Sal is furious that Richard has put their secret haven in jeopardy. Richard has already witnessed the awful principle of the commune that someone might have to suffer pain so that they can keep the secret of the beach.

When they get back to the island, Sal banishes Richard to the other side of the island to look out for the Americans. Alone on top of the mountain, he starts to go crazy and dreams of becoming a commando, like in one of the video games he plays. In the process, he has long conversations with the dead Daffy.

When the Americans finally come, everything hits the fan. They are brutally murdered by the drug dealers, who decide that it’s time to get rid of the hippies.

Richard spouts a great deal of pop philosophy in THE BEACH. To lessen the sophomoric nature of these philosophic musings, Francoise jokes that American men spout sophomoric philosophy just to pick up French women.

There is a black cricket player in the commune who says that the pillars of civilization are Christianity and cricket. When two of the Swedish brothers in the commune get bitten by a shark, one dies and the other, Christo, lingers on with his leg going gangrene. Eventually, Christo is banished by Sal from the commune to a small tent in the jungle because, as Richard says, “out of sight out of mind.” Richard explains that Christo had suffered because “we wouldn’t let anything ruin our fun. In the perfect beach resort, nothing is allowed to ruin our pleasure, not even dying.”

When Richard sees the drug dealers head for the commune with guns, Richard kills Christo in an act of so-called mercy and tries to escape with Francoise and Etienne. It’s too late, however, and there’s one last scene of confrontation between the head of the drug dealers, Sal and Richard. At the end of the movie, as the remaining hippies swim back to the mainland, Richard, now both a narcissistic liar and a murderer, comments that the survivors are taking their sins back with them to civilization. A year later, Richard gets an email from Francois. Attached to the email is a photo of them and the commune residents in happier times on the beach. Over the photo, Francois has handwritten, “alternate universe,” bringing a knowing smile to Richard’s lips.

It doesn’t take much of a theologian to pick up on the Christological references in THE BEACH, and there will be many who will get excited by the theological implications. However, the proof of the movie is in its ending, and the ending does not demand repentance and rejection of sin, nor does it recognize that true paradise can only be found with God through Jesus Christ. Thus, the movie really doesn’t lead viewers to reject the notion of the beach. In fact, many people, after seeing THE BEACH, may want to find such a mythical pagan resort with all its sinful pleasures.

Although the buzz around Hollywood is not very good about the quality of THE BEACH, the fact of the matter is that it will work well for the adolescents who are the target audience. It has a seductive quality to it, mixing pleasure and pain and the promise of the ultimate trip. It even contains an MTV sequence where Richard becomes a character in a video game. In spite of his well-known disdain for being an actor, DiCaprio is perfect for this adolescent environment.

THE BEACH may not appeal to critics, but will appeal to teenagers. Regrettably, they are the very people who should not see THE BEACH.

Writer: John Hodge BASED ON THE NOVEL BY: Alex Garland