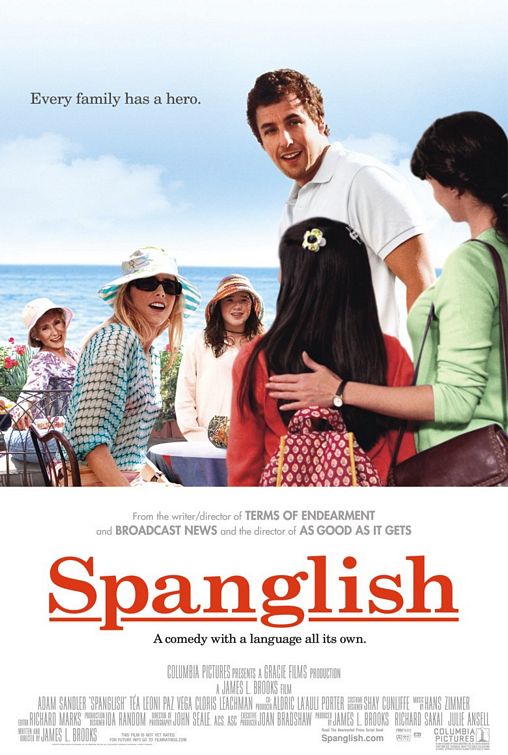 SPANGLISH is a more mature kind of Adam Sandler movie where he plays a gourmet chef in Los Angeles struggling with his high-strung wife. Sandler is not the lead character. That position belongs to his family’s beautiful new Mexican maid, Flor, played by Latino actress Paz Vega. Sandler plays John Clasky, who tries to mend the strained relationship between his wife and their pre-adolescent daughter. Flor has a better relationship with her own daughter, who John’s wife thinks is adorable. As John’s relationship with his wife becomes more strained, he is attracted to Flor.

SPANGLISH is often funny and heartwarming, with particularly fine performances, but its theme of adultery weakens the light Christian worldview and strong moral elements. There is also a bizarre sex scene between John and his high-strung wife, along with plenty of foul language, which is mostly light. The good news is, however, that the wife confesses her own adultery, and the maid breaks off her relationship with the husband before it goes too far. With a tighter script, a stronger premise, less negative content, and more redemptive, Christian content, SPANGLISH might have been a truly great family movie.

(C, BB, Ro, PC, AP, LLL, SS, N, AA, D, M) Light Christian worldview includes some strong moral elements, an answered prayer and references to Catholicism, weakened by theme of adultery where Christian heroine has unrequited love for married man whose wife has cheated on him and by some light Romantic, politically correct, anti-American elements regarding illegal immigrants, rich vs. poor and wealthy American lifestyles; at least 11 obscenities (including one “f” word and one “s” word repeated in Spanish), three strong profanities and 15 light profanities; no violence; implied adultery, high-strung married woman has orgasm on bed with her husband with husband doing nothing (played for a joke to show how high-strung wife is) and married man and unmarried woman kiss, embrace and talk intimately while sitting on couch, but nothing further happens or is shown; upper male nudity; alcohol use and grandmother is a lush; smoking; and, negative view of marriage, one mother has superficial relationship with her daughter, father is compassionate to his daughter but shows no firm discipline and seems to be a bit permissive and has trouble expressing himself to adults.

SPANGLISH is a different kind of Adam Sandler movie where he plays a gourmet chef in Los Angeles struggling with his high-strung wife. Sandler also is not the lead character in the movie. That position belongs to his family’s beautiful new Mexican maid, played by Latino actress Paz Vega.

SPANGLISH opens with narration by Christina, an Hispanic immigrant writing her admission essay to Princeton University. Christina is writing about her most unforgettable character, her mother Flor.

In flashback, the movie shows Flor, whose husband has left her and Christina, sneaking across the border from Mexico to Los Angeles with her daughter. In L.A., Flor decides to keep her daughter away from those awful gringos, the Americanos. She gets by on two jobs, but then decides to take a well-paying job as a maid and nanny for John and Deborah Clasky and their two children, Bernice and Georgie. Flor soon discovers that John’s high-strung wife Deborah is going through a major identity crisis. This crisis affects not only her relationship with John, but also her relationship with Deborah’s daughter Bernice. In the meantime, Flor tries to protect Christina from the fancy lifestyle of the Claskys, but, inevitably, both Flor and Christina are drawn into the crazy lives of the Clasky parental units.

As its title intentionally suggests, SPANGLISH is about the clash of cultures between Hispanics and Anglos, husbands and wives, parents and children, employers and employees, etc. It’s also about people’s inability to communicate with one another, even the people closest to them.

SPANGLISH is not as entertaining or compelling as it should have been, especially considering its excellent performances and high production values. Despite its overriding theme, it suffers from a meandering script with an unclear premise. The ending does not seem to really resolve all the communication problems. Also, the lack of communication between the characters is dramatically frustrating at times. This is made even worse with the character of John, who has a problem expressing himself, both to adults and to the audience. This is the way his character is defined, but it means that his dialogue does not always make sense and is sometimes confusing.

Also, a theme of adultery permeates the second half of the movie. [WARNING – SPOLIERS COMING] Deborah is obviously attracted to another man she meets, with whom she begins a secret affair. In the movie’s climax, Deborah confesses her infidelity and apologizes, but her confession drives John into the arms of Flor. Nothing salacious comes of this other than some kissing and embracing. Flor finally comes to her senses and runs away from further contact with John, but as she goes, she tells him, “I love you.” Before all this happens, however, there is a comical sex scene between John and his wife. Other than this bizarre scene, the movie contains no sex scenes. None of the movie contains any explicit nudity.

SPANGLISH does have a few strong profanities, however, plus one “f” word. It also has minor politically correct, anti-American elements, including scenes where Flor is disdainful of the rich American children attending an expensive private school. Flor has to intervene when her daughter Christina’s contact with these rich students corrupts Christina’s character. The movie never addresses the fact that Flor and her daughter are illegal immigrants who probably have to rely on counterfeit documents and/or subterfuge to continue living in the United States.

Despite its problems, SPANGLISH is often funny and heartwarming, especially the relationships between John and his daughter and Flor and her daughter. Both John and Flor are loving, patient parents. Flor also displays firm discipline with her daughter, something that John’s character seems to lack. Flor clearly states that she is a firm Catholic believer, and her daughter prays in one scene. Flor is very worried about her daughter’s character being corrupted by loose American values, not to mention American materialism. The movie sees Flor’s strong moral character as a positive quality. Another positive note in the movie occurs when the wife’s mother, an aging alcoholic, becomes sober to help her daughter save her marriage.

Were it not for the adultery theme, the foul language and the bizarre married sex scene, the strong moral content and positive Christian references in SPANGLISH would have stood out even stronger. With a tighter script, a stronger premise, less negative content, and more redemptive, Christian content, SPANGLISH might have been a truly great family movie.

Rating: PG-13 for foul language and one scene with bizarre sexual content

Writer: James L. Brooks BASED ON THE NOVEL/PLAY BY: N/A