"All Fangs and No Bite" 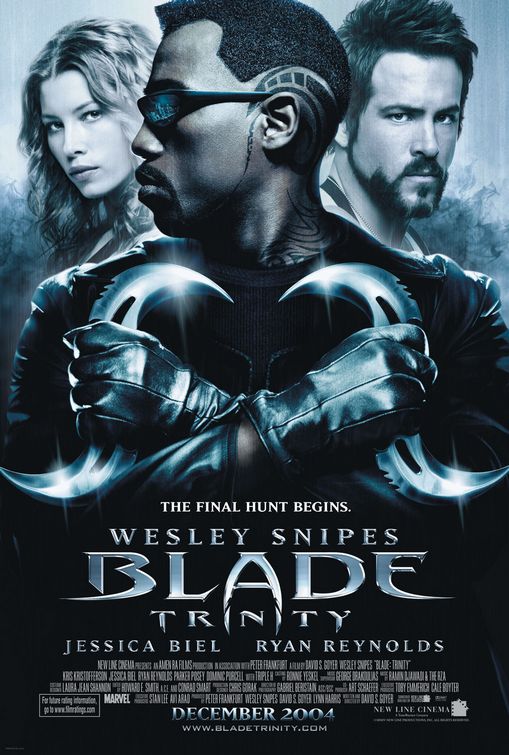 BLADE: TRINITY is the third feature from the popular vampire-turned-superhero series. Blade, played by Wesley Snipes, has super strength, fighting abilities and vengeful zeal to rid the world of evil vampires. This time around, he teams up with a younger generation of humans known as Nightstalkers. Blade and his new allies must face the original vampire who is called Drake (short for Dracula, of course). Known as the king of the vampires, Drake is revived by the vampire underworld to help them destroy Blade. Despite this potentially interesting storyline, the villain fails to deliver any chills and the audience is left in the cold.

BLADE: TRINITY is largely a re-hash of so many other movies before it. The excessive violence directed at vampires is surreal, “cartoon violence.” In a troubling plot turn, Blade and his partners kill or maim humans acting as police and SWAT teams. This idea flies in the face of Blade’s commitment to protect humans whenever possible. BLADE: TRINITY is not just a disappointment to those who enjoyed the first two movies. It is a low-water mark for the series in that it relies heavily on coarse language and sexual references.

(HH, Pa, O, Ev, FR, B, PC, LLL, LLL, SS, NN, A, DD, MM) Strong humanist worldview with some pagan, occult elements about a group of humans fighting vampires to protect the human race, with evolution comment where villain is shown as a demonic-looking shape-shifting character that is somehow human but “born perfect” and that he “never had to evolve”, and hero character shown meditating, as well as some moral elements, including one moment where girl defends her belief that she is going to Heaven against vampire villain who argues her “there is no Heaven, no God, only nothingness”, mitigated by brief politically correct message that “nobody cares about homeless people”; at least 66 obscenities (including about 42 “f” words), two profanities, three blasphemies, and crude hand gestures; excessive violence includes fighting with guns, knives, swords, arrows, and lasers, headless body shown, implied torture, motorcyclist run over by car, man breaks arm of vampire, woman and baby in peril, young girl pursued and held hostage by vampire, baby thrown to another man on a roof, man dropped from roof, vampire pulls arrow out of his eye, vampire dogs chase man, teenager thrown out of window, neck bite with much blood, humans shown kept alive in comas for vampire blood supply, and vampires burst into flames and ash as they quickly die, plus much blood and many stabbings, shootings, car crashes, martial arts fighting, and explosions; many sexual references and sex toys shown, plus character mentions she was born out of wedlock; upper male nudity and pubic hair shown, and brief, obscured female nudity in shower; drinking; smoking and characters inject medicines and virus; and, strong themes of vengeance and heroes practice the idea that the ends justify the means

BLADE: TRINITY is the third feature from the popular comic-book-turned-movie-franchise series. Blade (played by Wesley Snipes) is the central, conflicted hero who is half-vampire and half-man. This gives him super strength, fighting abilities and a vengeance to rid the world of evil vampires. Blade partners with his aging human sidekick, Whistler (played by Kris Kristofferson), and uses a vampire vaccine so that he can fight the vampire underworld and its demonic hierarchy.

In BLADE: TRINITY, Blade teams up with a younger generation of human fighters known as Nightstalkers (not exactly an original name). Whistler’s illegitimate daughter, Abigail (played by Jessica Biel), and a former vampire named King (played by Ryan Reynolds) rescue Blade after he is arrested for the murder of a human. The human turns out to be “a familiar,” a human in alliance with the evil plans of the vampire underworld.

Blade learns that the vampires have awakened the first and original vampire from his centuries-old slumber. Named Drake (for Dracula), this vampire is described as “born perfect” and nearly all-powerful, though his vampire origins are left intentionally vague. Initially perturbed by the fact that they even woke him, Drake decides to help the band of vampires destroy their arch-nemesis, Blade. Gun-battles, sword-fights and roof-jumping chases lead up to the climactic fight between the two powerful characters. The humans have created a mutant virus strain which, when injected into the evil Drake, will destroy the creature and cause a death vapor to kill any vampires in the area at the time. However, they only have enough virus potion for one injection, only one shot at the creature’s destruction. The humans are also concerned that the virus death-cloud will take Blade’s life in the process.

All this probably sounded great on script and storyboard, but BLADE: TRINITY is a disappointment of epic and comic book proportions. There are several reasons for this failure, but the obvious ones are these – the movie’s director, its Villain and the unoriginal ideas in the story.

David S. Goyer wrote all three BLADE stories and BLADE 2 was one of those few sequels that turn out to be far better than its predecessor. This, however, is Goyer’s first time to direct a BLADE movie and the awful, uninspired results probably can be credited to him. To be fair, Goyer’s bio says he went from Generator Operator (on 2002’s INSOMNIA) to director of BLADE: TRINITY practically overnight. So BLADE: TRINITY is further proof that a talented writer does not necessarily guarantee a capable director.

Consequently, this third movie is plagued with experimental split screens and long scenes of characters preparing hardware, weaponry and dressing in the latest (and fashionable) fighting gear. The driving soundtrack is ramped up to jarring levels during fight scenes to make them seem more interesting. Unfortunately, even that feeble attempt cannot hide a bad story.

Drake as the all-powerful villain of BLADE: TRINITY is one of the most boring, wimpy and unbelievable villains in some time. Most action and science fiction movies, as true fans will tell you, are nearly entirely dependent upon a great villain. Fans will recall movies like ALIENS, STARGATE and PREDATOR as having villains which are a genuine threat to the protagonists. In fact, BLADE 2 was so successful because the villains (vampires-turned-zombie creatures) terrified vampires and humans alike. This movie, however, shows the villain running away from Blade in the middle of the story! This silly scene defuses any notion of a real threat when the all-powerful villain runs away from the hero. Dominic Purcell portrays Drake, and he is about as frightening as an out-of-work actor. Goyer tries to help by giving Drake a BOOMING VOICE once in awhile, but this just makes him laughable.

Finally, BLADE: TRINITY is just a re-hash of so many other movies before it. Action movie fans will recognize borrowed characters and choreographed scenes from television shows and more successful movies.

It is possible that BLADE: TRINITY only has one or two original ideas in it. Audiences will be entertained to some extent, but those nagging we’ve-seen-all-this-before thoughts will bother you throughout the movie.

Snipes looks menacing enough as Blade, but he lacks the energy and credibility he once delivered to this role. He will probably think twice before returning to this franchise. Kristofferson (at 68) barely gets through his part as Whistler. His age is showing and his raspy voice is going fast. It is sad to watch this fine actor go out this way.

As vampire movies go, BLADE: TRINITY, of course, contains an excessive amount of “cartoon” violence. The villains are not human, so the violence remains surreal or hyper-real, and not seemingly as offensive as some historical war movies. Even so, Goyer arranges for Blade and Whistler to shoot, kill and destroy countless humans (acting as policemen and SWAT teams) who close in to arrest Blade. This idea flies in the face of Blade’s commitment to kill only vampires and protect humans whenever possible. It is yet another story problem that surfaces in this remake.

BLADE: TRINITY is not just a disappointment to those who may have enjoyed BLADE 2’s characters and story progression, but it is a low-water mark for the series in that it relies heavily on coarse language and sexual references throughout. New characters Abigail and King are clearly an attempt to infuse new blood into an aging franchise. As the movie skews younger, the story skews juvenile and the mess Goyer has made cannot be fixed with a transfusion.

Writer: David S. Goyer BASED ON THE COMIC BOOK SERIES