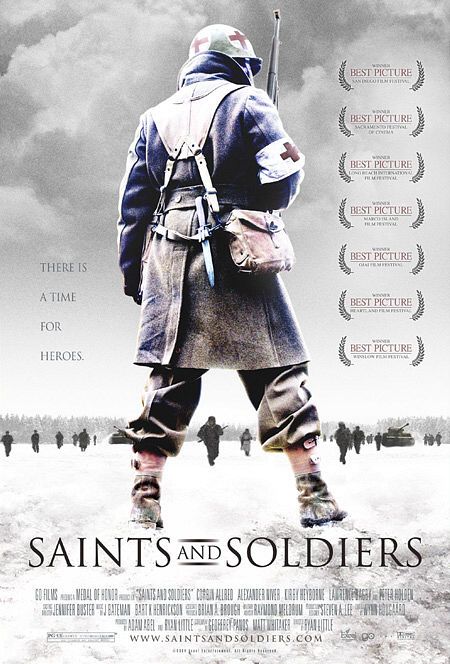 SAINTS AND SOLDIERS is a low-budget war movie with some profound messages, some flat spots and some slightly annoying moments. The movie is done in flashback, about a supposedly true life event that occurred during World War II. It follows four American GIs who escape execution by the Nazis and try to get through the German lines to deliver important intelligence information to the Americans. The focus is on Deac, who is haunted by the terrors of warfare. He was once a missionary in Berlin and encounters a German soldier to whom he witnessed before the war.

SAINTS AND SOLDIERS was clearly shot on a low budget, so the staging and battle scenes are on a small scale, like a TV production, but the acting is good and the direction is very precise. The weakness is the storyline. The audience does not completely understand Deac’s motivations, and the premise is slightly muddled. There are also some questionable elements, including one possibly spiritist scene. The movie has an overall redemptive theme, however, that extols prayer and shows men sacrificing themselves for others. It has many virtues and deserves the awards it’s received.

(C, Pa, O, L, V, D, M) Mild Christian worldview with some questionable content suggesting a disregard for human authority, possible occult content where dead men appear to visit soldier in a vision, and a slight cultic relationship between soldiers on opposite sides of the battles; two obscenities and at least three exclamatory profanities such as “Oh God!”; battlefield violence with very little blood, one very bloody scene treating a soldier’s leg wound, and several deaths; no sex; no nudity; no alcohol; smoking consistently; and, man has visions of dead people, and soldier lies to another soldier.

SAINTS AND SOLDIERS is a low-budget war movie with some profound messages, some flat spots, and some slightly annoying moments. The movie is done in flashback, about a supposedly true life event that occurred during World War II.

An American division finds 70 GIs who were executed by the Germans. The movie flashes back to a couple of weeks before, when four GIs – Deac (short for “Deacon”, which is a nickname denoting his religious bent), Kendrick, Steven, and Gordon – escape the executions, meet up with a British officer, Winley, and try to get through German lines to deliver important intelligence information about the German offensive to the Americans.

The focus of the story is Deac. The audience learns in the middle of the movie that he went into a war torn church from which someone was shooting at the American troops and sprayed the church with bullets, only to find out that he had killed some women and children. The visions of these women and children not only haunt him throughout the movie, and they keep him from firing on at least two Germans who escape to tell other Germans where the Americans are.

Deac speaks German fluently and was a missionary before the war. In the midst of their treacherous journeys, he encounters a German to whom he witnessed before the war when he was a missionary in Berlin. He consistently reads from what appears to be the New Testament, although there are very minor suggestions in the movie that he is Mormon, and he could be reading from the Book of Mormon (the movie is produced and distributed by a Mormon company founded by a former Disney executive). There are also very low-key suggestions that the dead people are actually visiting Deac. Also, there is some kind of cultic camaraderie between him and several Germans, which allows both him and the Germans to be disobedient to their immediate authorities and their mission.

At any rate, the human condition is exposed, prayer is extolled, good triumphs over evil, men sacrifice themselves for others, and the movie has a redemptive overall theme. SAINTS AND SOLDIERS was clearly shot on a low budget, so there are no great battle scenes and the staging is on a small scale, almost like a television production. However, the acting is good, and the direction is very precise.

At any rate, SAINTS AND SOLDIERS has a lot of virtues and deserves the awards it has received.

Writer: Geoffrey Panos, Matt Whitaker BASED ON THE NOVEL BY: N/A