THE WORK AND THE GLORY

"A Burning in Their Bosoms" 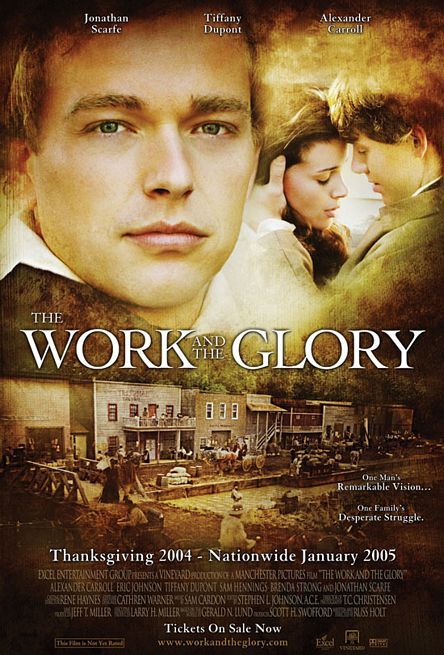 THE WORK AND THE GLORY is a Mormon movie about Joseph Smith and how the Book of Mormon came to be. The story of Smith is fictionalized to include a pioneer family that is divided because of Smith’s false, non-Christian teachings about God, Jesus Christ and Christian history. In 1826, Ben Steen and his family move from Vermont to upper New York, where Ben bought a farm. Ben’s older sons, Joshua and Nathan, become divided over the strange teachings of the family’s newfound friend, Joseph Smith. Joseph tells them about visions of god and angels, who promise to bring Joseph a new bible on golden plates.

THE WORK AND THE GLORY is filmed with great attention to historical detail, except where it counts: the story and teachings of the charlatan Joseph Smith and the creation of the Book of Mormon. THE WORK AND THE GLORY is extremely vague about the religious teachings of Smith. Little is said about what Smith actually taught, or about his checkered past. The movie does, however, contain references to the Mormon Church’s heretical, polytheistic and pagan teachings about God the Father and His Son, Jesus Christ.

(PaPaPa, FRFR, AbAb, RoRo, V, A, M) Very strong pagan worldview supporting Mormonism, with strong implications of false religious doctrines and strong condemnation of historical Christian churches, which are rejected as being false, according to Mormon founder Joseph Smith, as well as strong Romantic philosophy from Mormonism, where feelings dictate religious decisions rather than intelligent, logical examination; no foul language; some light action violence such as man attacked but he escapes before serious injury and fight over gun; no sex or nudity, but some light kissing; alcohol use by villains and troubled character; no smoking; and, son rebels against father and fights brother over woman.

THE WORK AND THE GLORY is a Mormon movie about Joseph Smith and how the Book of Mormon came to be. The story of Smith is fictionalized to include a pioneer family that is divided because of Smith’s false, non-Christian teachings about God, Jesus Christ and Christian church history.

In 1826, Ben Steen and his growing family move from Vermont to Palmyra in upper state New York, where Ben has bought a farm. Despite the strength of Ben and his two older sons, Joshua and Nathan, the family has a hard time clearing the land. Ben hires two young men to help, Joseph Smith and his brother, Hyram.

The family begins to hear strange talk in town about two “angels” visiting Joseph and promising to bring him a new bible on golden plates. Ben’s wild son Joshua is offended by Joseph’s story, but Nathan, the more serious son, is intrigued. Joshua becomes more wild and leaves the family to work on the river docks. He takes up with some skeptical, rowdy men, who want to steal the alleged golden plates from Joseph Smith.

Meanwhile, Nathan’s interest in Smith’s phony religion and the alleged translation of the Book of Mormon grows, as does his mother’s. Their interest further divides the family from the father.

THE WORK AND THE GLORY is well filmed with great attention to historical detail, except where it counts: the story and teachings of the charlatan Joseph Smith and the creation of the Book of Mormon. The movie mentions nothing, for example, about Smith’s involvement in divination, an occult practice condemned strongly by God in the Bible. Smith used divination not only to “translate” the Book of Mormon, but also to find buried treasure for people (he never really found any buried treasure for anyone, apparently). Nor doers the movie mention the fact that no one outside of Smith’s closest circle of a few friends and relatives ever saw the golden plates of the Book of Mormon, which Smith said he received from an angel named Moroni. The movie does, however, mention the story that one of Smith’s associates, Martin Harris, took a small written copy of a small excerpt from the original Hebrew-Egyptian “shorthand” of the original golden plates to a Columbia University professor, Charles Anthon, who pronounced it an authentic ancient language. Of course, the movie fails to mention that there is no secondary confirmation of the claim by Martin Harris. In fact, in a letter written Feb. 17, 1834, Dr. Anthon actually denied telling Harris any such thing. Dr. Anthon wrote that the alleged excerpt was a hoax. Furthermore, modern scholars have found no other example of an ancient text that bears much resemblance to the excerpt, which still exists in the archives of the Mormon Church in Utah. As Anthon wrote so long ago, the golden plates and the Book of Mormon are part of an awful hoax perpetrated on millions of vulnerable people.

THE WORK AND THE GLORY is also extremely vague about the religious teachings of Joseph Smith. Little is said about what Smith actually taught, other than the fact that both God the Father and His Son, Jesus Christ, allegedly appeared to Smith in bodily form. Mormonism teaches that both the Father and the Son have physical bodies because, before they became gods, they were people just like you and I. This teaching is rank heresy because it denies the biblical truth that God is one being (Mormonism also teaches that the Holy Spirit is a separate being instead of just a distinct personality with one divine being that He shares with both the Father and the Son). Thus, Mormonism teaches a form of polytheism and pagan idol worship, not the monotheism of the Hebrew-Christian Bible.

Mormonism is also heretical because it teaches that Christians must work their way to eternal life in Heaven. Thus, even though the Mormon Church says you must put your faith and trust in Jesus Christ to get to Heaven, it also says, according to the Mormon website at www.mormon.org, that you must be baptized in the Mormon Church and keep the commandments of God. In other words, the sacrifice of Jesus Christ on the Cross is never enough. In fact, the Mormon website even says that, in order to receive the Holy Spirit, you have to keep God’s commandments (see “Gift of the Holy Ghost” at www.mormon.org).

Thus, Joseph Smith and the Book of Mormon add a whole bunch of new, unbiblical writings and teachings that contradict the Bible. The Mormon Church, or Church of Jesus Christ of Latter-Day Saints, teaches a non-historical Jesus and an anti-Christian religious philosophy that sounds bizarre to many discerning people once they hear the details. If these things are not from the Pit of Hell, what is?

Finally, THE WORK AND THE GLORY contends that the way to tell if the Book of Mormon is true is simply to pray about it and let your feelings decide. This is how Nathan, Nathan’s mother and Nathan’s future wife convert to Mormonism. This kind of emotional religious faith is completely contrary to the Holy Bible because, as Acts 17:11-12 says, we should test everything according to Scripture, not our personal feelings and whims. Or, as Hebrews 11:1 says, “faith is the evidence of things not seen (KJV).” The evidence of the historical Jesus led the Apostle Peter to proclaim in 2 Peter 2:1-3:

“But there were also false prophets among the people, just as there will be false teachers among you. They will secretly introduce destructive heresies, even denying the sovereign Lord who bought them–bringing swift destruction on themselves. Many will follow their shameful ways and will bring the way of truth into disrepute. In their greed these teachers will exploit you with stories they have made up. Their condemnation has long been hanging over them, and their destruction has not been sleeping.”

The story of Joseph Smith is the story of a false prophet. Smith exploited people with stories that he and his cohorts made up. This became abundantly clear in the 1830s, when, based on his own adulterous advances, he suddenly created the new doctrine of polygamy. Reportedly, this new doctrine not only created strife between Smith and his wife, but also strife within his own church, especially with the husbands of the wives that Smith coveted. Eventually, this led to his assassination. The wages of sin, and of false prophets, is death indeed.

Although THE WORK AND THE GLORY does not get into all the details of the Mormon Church’s heretical teachings, it does contain references to the Mormon Church’s heretical, polytheistic and pagan teachings about God the Father and His Son, Jesus Christ. Also, except for the character of the father, Ben, its depictions of the people who oppose Joseph Smith and his teachings, and its references to Christian churches, are negative stereotypes designed to make Joseph Smith look saintly in comparison. The historical truth, of course, is not so black and white. After all, every one of us is a sinner saved by the Grace of God alone, through faith in the historical Jesus Christ of the New Testament and the prophesies and promises of the Old Testament, which are the only Word of God that truly exist.

Writer: Russ HoltBASED ON THE NOVELS BY: Gerald N. Lund