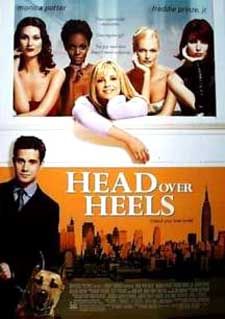 Monica Potter stars in HEAD OVER HEELS as an art restorer named Amanda. In looking for a new apartment in New York City, Amanda lands in with a foursome of beautiful fashion models. At the same time, she develops an immediate crush on a charming fashion executive, named Jim Winston and played by Freddie Prince, Jr., who lives in the building next door. Surprisingly, Jim turns out to be a shy, retiring type like Amanda, which makes her attraction to him all the stronger. One night, Amanda spies Jim apparently committing a cold-blooded murder. To solve the mystery about Jim, she and her four loopy roommates take to the streets of Manhattan as second-rate sleuths.

HEAD OVER HEELS turns out to be an action comedy as well as a romantic comedy. This mix doesn’t always gel, especially when the movie adds some gross toilet humor to help get a PG-13 rating. The movie also promotes sexual promiscuity, including fornication, among young adults. There is also a politically correct plot about Amanda’s lesbian co-worker, who ends up with one of the models. Plenty of foul language, most of it mild, adds to the mess

The filmmakers of the new romantic comedy HEAD OVER HEELS must have taken a tumble themselves while shooting this story. Their movie is a schizophrenic mess that doesn’t know whether to be a breezy comedy with a Julia Roberts sound-alike, an outrageous Farrelly Brothers comedy ala THERE’S SOMETHING ABOUT MARY or a comical action farce. By the time the movie reaches its frenetic climax, viewers may find themselves somewhat disinterested.

Monica Potter, who may remind many viewers of a younger Julia Roberts, stars in HEAD OVER HEELS as an art restorer named Amanda. Amanda is moping over a series of failed love affairs with live-in boyfriends who turn out to be cheats. In looking for a new apartment in New York City, she lands in with a foursome of beautiful models. At the same time, she develops an immediate crush on a charming fashion executive, named Jim Winston (Freddie Prinze, Jr.), who lives in the building next door. Surprisingly, Jim turns out to be a shy, retiring type like her, which makes her attraction to him all the stronger.

One night, however, Amanda spies Jim apparently committing a cold-blooded murder. So, she and her four loopy roommates take to the streets of Manhattan as second-rate sleuths to solve the mystery about Jim.

The story to HEAD OVER HEELS is a decent-enough concept for a funny romantic comedy, but the filmmakers are not content to entice the moviegoing public with a breezy, warm-hearted screwball comedy. They also have to throw in some gross-out toilet comedy befitting something like last year’s wrestling yarn, READY TO RUMBLE, which was about two septic tank workers who help their wrestling idol get back his wrestling crown. Not only that, but there’s also a subplot involving Amanda’s Asian lesbian co-worker, who drools over Amanda’s new roommates. In fact, at the end of the movie, the lesbian co-worker takes one of the models as her lesbian lover.

HEAD OVER HEELS turns out to be an action comedy as well as a romantic comedy. This mix doesn’t always gel either. In fact, the action comedy seems tacked on to the story. Part of the problem may be that Mr. Prinze just doesn’t have what it takes to pull off the changes in character that would really make this movie a juicy action comedy with plenty of suspense. Furthermore, while both he and Monica Potter as Amanda are certainly appealing, they don’t seem to have any “gravitas.” It took Audrey Hepburn and Cary Grant years of stardom, for instance, to pull off the wonderful suspense comedy in their classic movie, CHARADE.

In addition, Jim and Amanda’s characters don’t display the professional intelligence or savvy that their jobs would seem to require of them. This lack of believability becomes especially acute when Amanda’s roommates give Amanda a makeover so she can meet Jim at a party. Instead of giving Amanda the level of sophistication that they themselves appear to have, they pour on the eye shadow on Amanda, making her look more like a high-priced prostitute rather than a friend they are trying to help by sprucing her up for the man she likes. If viewers can catch the fact that Amanda seems to have way too much eye makeup, especially when compared to her roommates who are supposed to be actual models, then why wouldn’t Amanda herself?

All in all, however, it’s the really obnoxious, distasteful toilet humor, the uneven mix of genres, and the pro-homosexual political correctness that really expose this movie’s foolish pagan folly. Worse than this is the fact that the relationship between Amanda and Jim also promotes sexual promiscuity and empty sexual athleticism among young adults. An implied fornication scene occurs between them midway through the movie, and Jim asks Amanda to repeat her performance in a brief quip at the end. It never seems to occur to Amanda that the reason she has been having problems with her past boyfriends may be her immoral, cavalier attitude toward sexuality. Since it doesn’t seem to have occurred to her, or the makers of this movie, then you can bet your bottom dollar it won’t occur to the teenagers and young adults who will be sucked into going to see this movie, or renting it when it comes out on DVD and VHS.

On the positive side, however, HEAD OVER HEELS does promote finding out the truth about people you meet before establishing more intimate relationships with them. As they say, beauty is only skin deep, and HEAD OVER HEELS tells viewers to take a deeper look before they commit to someone. The movie also contains some other mild moral elements, such as a pro-police storyline about catching foreign criminals invading the United States.

Finally, HEAD OVER HEELS also includes plenty of foul language. Though most of it is mild, there are a few stronger epithets.