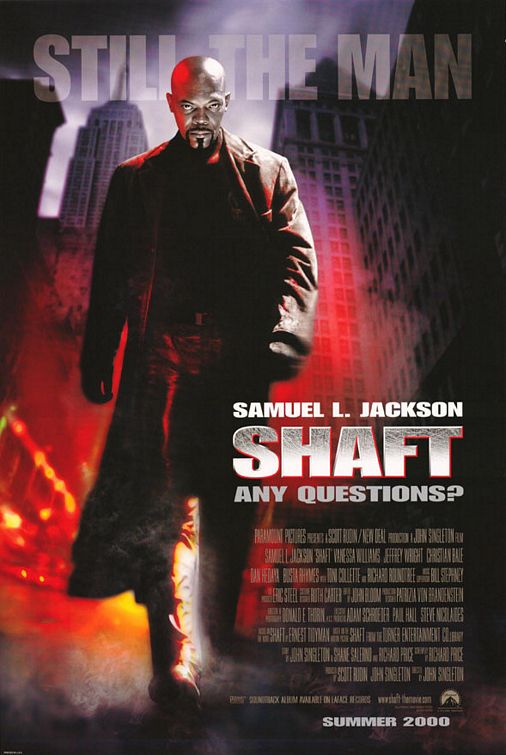 SHAFT stars Samuel L. Jackson as the nephew of the famous African-American private detective, played once again by Richard Roundtree, who still looks good after all these years. The nephew also is named John Shaft. John resigns from the New York City police force after a racist murderer gets bail a second time, though he skipped out on his first bail. John sets out to get the goods on the criminal by finding an eyewitness and getting her to talk. Complicating matters is a Dominican immigrant and drug dealer seeking revenge against Shaft.

SHAFT includes some moral elements about fighting corruption, arresting criminals and telling the truth, but it has a pagan worldview supporting vigilante justice and sexual immorality. There are also well over 100 obscenities and profanities in SHAFT, and one toilet joke that is extremely vulgar, even sickening. Finally, although the movie contains strong gun violence and images of blood splattering typical of R-rated urban crime flicks, the brutal murder of the black college student by the rich racist is repeated at least twice in flashback. Such repeated imagery is just as likely to inspire violent racists as it will discourage them

Bringing back John Shaft, the African-American hero from the 1970s, may prove to be a stroke of marketing genius for Paramount Pictures. Letting Richard Roundtree reprise his character and casting the popular, talented Samuel L. Jackson as his nephew, who’s named John Shaft as well, also seems to be a good marketing ploy. The good news for Paramount is that the filmmakers, led by African-American writer/director John Singleton, show they are up to the task of creating an entertaining, action-filled movie. The bad news, however, is that they’ve included more than enough R-rated material to scare away many customers who might enjoy re-visiting this particular icon from Hollywood’s past. They’ve also added a strong theme of vigilante justice that goes a bit too far.

Two years later, the rich racist secretly returns to America, only to be nabbed by Det. Shaft. When the new judge still sets bail for the scoundrel, Shaft resigns from the force to become a private detective like his Uncle John (Richard Roundtree). His first assignment: get the goods on Mr. Wade by finding the eyewitness and convincing her to talk. Helping him is an informant named Rasaan (rapper Busta Rhymes) and a woman cop, Carmen, played by Vanessa Williams. Complicating matters is a Dominican drug dealer named Peoples Hernandez who made friends with Wade while they were in jail and who wants revenge on Shaft for humiliating him in the neighborhood he rules.

As might be expected, both Jackson and Roundtree are the epitome of modern cool in this new version of SHAFT. Regrettably, their stylish masculinity, like white secret agent James Bond, also includes fornicating with the opposite sex, something which the movie implies in two scenes. One of those scenes includes a couple crude, equally unnecessary, innuendoes in the dialogue. Although the sexual immorality is only implied in these two scenes, not actually shown, the opening credit sequence to SHAFT includes brief images of faceless, depicted sexual intercourse, including flashes of rear nudity and upper female nudity. Cutting these unnecessary images would have made the movie significantly more tame, sexually speaking, but perhaps that is exactly the point being made. After all, the famous, original, Oscar-winning song by Isaac Hayes, which plays during the opening credits, says that Shaft is a “sex machine.”

Another bothersome aspect to this new SHAFT is the hero’s search for vigilante justice. An act of vigilante justice, in fact, closes out the movie, and the act seems to bring a slight smile from Shaft’s lips. Of course, most hardboiled detective fiction stories, even older works such as Raymond Chandler’s novels, flirt with the idea of vigilante justice. The world that the heroes encounter in these books is usually very corrupt, with normal laws being ineffectual. The heroes thus must establish their own code of ethics in order to stop the evil that is hurting or even corrupting the innocent. That code is usually based on some of the ethics in many traditional Westerns. The best of these stories are morally satisfying as well as emotionally stimulating. There’s a line, however, between justice and injustice that shouldn’t be crossed. The new SHAFT seems to cross that line in the end. Instead of mitigating the movie’s paganism, it strengthens it.

Finally, there are well over 100 obscenities and profanities in SHAFT. There is also one toilet joke that is extremely vulgar, even sickening. Although the movie contains strong gun violence and images of splattering blood typical of most R-rated crime flicks, the brutal murder of the black college student by the rich racist is repeated at least twice in flashback. Such repeated imagery is just as likely to inspire violent racists as discourage them.