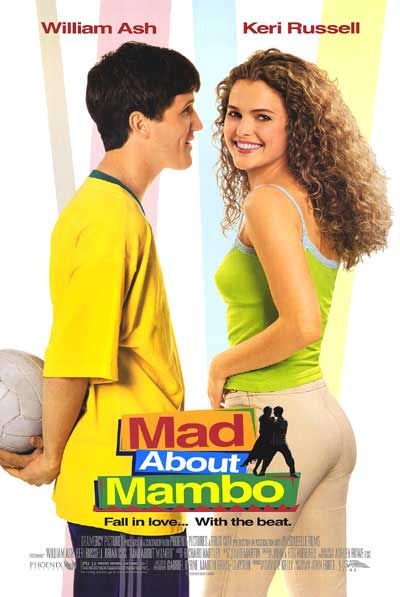 In MAD ABOUT MAMBO, Lucy (Keri Russell of TV’s FELICITY) is an upper-class girl in Belfast, Ireland unexpectedly paired with Danny, a boy from the working class side of town. Danny is so intent on playing professional soccer that he decides to improve his skills by taking dance lessons at a dance studio, where he meets Lucy, an upper-class girl who wants nothing to do with him. Eventually, the two help each other achieve their goals.

Set amidst the backdrop of the ever-clashing Protestants and Catholics in Belfast, MAD ABOUT MAMBO is a lighthearted, funny romantic comedy with lots of originality. The Irish accents were for the most part a good effort, and only a few words really stood out. William Ash as Danny and Brian Cox as Lucy’s father played their roles with heart, and they, along with Keri Russell as Lucy, gave fine performances in both the dramatic and comedic stretches of their roles. The dancing was fair, but made the movie’s point. Despite the mostly moral story, however, there are few scenes of sensuality, including one corny scene in a swimming pool. MAD ABOUT MAMBO also contains foul language, alcohol use, and drunkenness

(B, C, LL, V, N, AA, M) Mild moral worldview, with some Christian elements & some miscellaneous immorality; 4 obscenities, 7 profanities including 2 by a priest, plus some lewd language, a European offensive hand gesture & man uses urinal; boy jokes that he wants to travel around killing people for money, boy angrily tears posters down; kissing, some sensuous dancing, boy asks other boy if girl likes bondage to which boy replies, “what’s bondage?”; girl is shown putting on a shirt from behind with outline of breast shown, girl depicted in bra & underwear & upper male nudity; alcohol use at a party & drunkeness by parent; and, some coarse remarks regarding religious differences.

Lucy McLaughlin (Keri Russell of TV’s FELICITY) is an upper-class girl in Belfast, Ireland unexpectedly paired with Danny Mitchell (played by newcomer William Ash), a boy from the working class west-side of town in MAD ABOUT MAMBO.

Danny is an 18-year-old facing graduation with both fear and excitement. Despite his soccer coach telling him he needs to improve his skills, Danny is intent on playing soccer professionally. During a television interview with Carlos, a Brazilian player newly signed onto the Ireland team, Danny hears Carlos talk about how Brazilian players “mambo” with the ball. Danny, determined to improve his soccer skills, grasps this idea and heads for the dance studio. There he meets Mrs. Burns, the instructor who takes to Danny immediately. He also meets Oliver (played by Theo Fraser Steele of MRS. BROWN) and Lucy, dance partners who seem to snub Danny at first.

Oliver tells Danny he dances for Lucy, and Danny replies that he wants to improve his soccer skills. Upon hearing this, Oliver challenges Danny and his team to a soccer match. Seeing the beautiful Lucy, Danny obliges, hoping for the chance to see her again. At the soccer match, Danny accidentally collides with and injures Oliver. As Lucy helps him to her car, Danny tries to help, only to be met with a harsh tone of reproach. Later, Danny goes to the hospital to visit Oliver to apologize when Lucy walks into the room. She directs her hostility toward Danny again until her father, Sid (played by Brian Cox of BRAVEHEART), rebukes her.

Sid takes a liking to Danny immediately and tells his daughter not to be such a snob. When he finds out that Danny wants to play soccer for the pro team United, Sid tells him he will talk to a scout and get him to see Danny play. Later, while at dance practice, Danny and Lucy finally talk, though each is fairly tense. Danny discovers that Lucy was so upset because her chances are ruined for an upcoming dance competition. Danny offers to be her partner, and the pair’s rocky start gets even worse, but leads to romantic and often funny situations. Eventually, they learn to help each other achieve their goals in a way that makes them learn just as much about each other.

Set amidst the backdrop of the ever-clashing Protestants and Catholics in Belfast, MAD ABOUT MAMBO is a lighthearted romantic comedy that has a lot of originality. The Irish accents were for the most part a good effort, and only a few words really stood out. Cox and Ash played their roles with heart, and they, along with Russell, gave fine performances in both the dramatic and comedic stretches of their roles. The dancing was fair, but made the movie’s point. While teenagers are the biggest demographic for MAD ABOUT MAMBO, adults will admire the humor and culture of Ireland, with a glimpse into the country’s diversity and tone.

The religious tensions are touched upon in relation to class in this movie, but are often joked about in the dialogue. This brings the overall tone of the movie to an optimistic level, bringing it away from heavy politics. Despite the mostly moral story, however, there are a few scenes of sensuality, including one corny scene in a swimming pool. This movie also contains some foul language, partial nudity, alcohol use, and drunkenness.