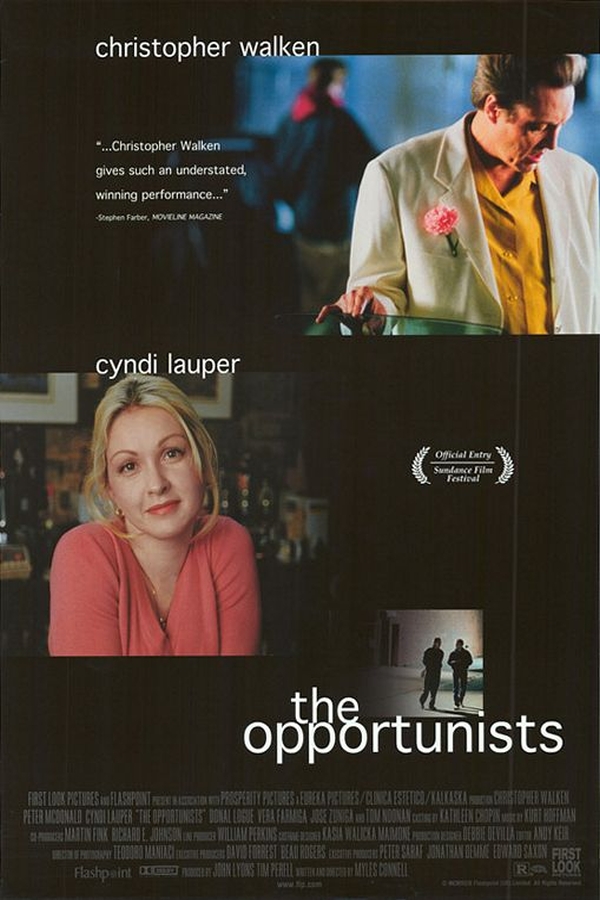 In THE OPPORTUNISTS, Christopher Walken is Victor Kelly, an unsuccessful auto mechanic living in Brooklyn. Although many years prior Vic was caught up in a robbery scheme, he now leads a crime-free, but unhappy, life with his daughter and aunt. Money is tight, and Vic is unable to pay his rent. Just at that time, his cousin, Michael, from Ireland arrives to live with him. Michael convinces Vic to get involved in a new plan to rob the man for whom his two friends work as security guards. Vic, Michael and their friends create an elaborate and well-timed plan to break into a large vault in the company’s office and steal the money.

THE OPPORTUNISTS is boring at times and seems to give the audience the impression that stealing and dishonesty can improve one’s life. It has a strong pagan worldview where stealing, lying and breaking laws are portrayed as exciting and dangerous, but no consequences really befall the characters. The evil overtones in THE OPPORTUNISTS probably will leave discerning viewers feeling depressed about our justice system and the decency of other people. There are also a few strong obscenities in this movie

(PaPaPa, LL, V, S, A, MMM) Strong pagan worldview of characters whose main purpose in life is to cut corners to steal from others; 8 strong obscenities, including 5 mentions of the “f” word, & 2 profanities; one violent scene in which a man is punched & some men get arrested; implied sex (man lives with his girlfriend) & incestuous proposition; no nudity; alcohol use; no smoking or drugs; and, strong miscellaneous immorality, such as four men go to great lengths to steal money, policemen portrayed as corrupt, loyalty of friends is questioned, family is deceived, family member not held accountable for crimes, & stealing, lying & breaking laws are portrayed as exciting & dangerous, but no consequences really befall the characters.

THE OPPORTUNISTS is a mildly dark and depressing look into the life of Victor Kelly (Christopher Walken), a Brooklyn mechanic struggling to make ends meet and pay off his debts. As owner of the rundown Vic’s Garage, he sees little money come his way, not even enough to pay his rent. Vic’s daughter, Miriam, and his Aunt, Dee, live a simple life with him in a small suburban home. Unexpectedly, Vic’s cousin, Michael, comes into town from Ireland looking to stay with Vic and start a new life. Michael is determined to get Vic involved in a scheme that could make them both a lot of money. It is dangerous, considering Vic’s previous criminal background, but greed takes over, and he finally agrees.

The movie centers on Vic, Michael and their two friends who attempt to break into a company’s vault and steal a good deal of money. Vic’s two friends work as security guards for a company that transfers money, mostly cash, and they are certain they can successfully steal from their boss. Vic immediately takes charge of the operation, and they go to great lengths to deceive everyone around them in order to steal the money. When the scheme goes awry, the movie begins to pick up, but the moral and ethical choices of the characters are disappointing, and some events are unrealistic.

Regrettably, THE OPPORTUNISTS sends viewers a distorted message that lying and breaking laws have consequences that can be escaped. There was no mention of God in the movie, even in times of need, except to take the Lord’s name in vain. Throughout the movie, Vic tries to make up for mistakes he made in the past by committing another crime, which he feels will give him the money he needs to make his life better. His cousin, Michael, plays the part of the evil apprentice, coaxing Vic into taking part in the heist from the moment he comes into town. Michael tries to redeem himself in the wrong way, proving he is lost without a moral conscience. Another disturbing moment occurs in the film when Michael asks Vic’s daughter, Miriam, for a date. Even though she believes Michael to be her father’s cousin, she accepts.

Christopher Walken’s talents were wasted on this film because of its poor plot and dragging dialogue. Like a number of movies that Walken has contributed to in the past, such as EXCESS BAGGAGE with Alicia Silverstone, PULP FICTION with John Travolta and SLEEPY HOLLOW with Johnny Depp, this production was pointless. The audience was filled with no redeeming values, only a wrong idea of how laws in our country are carried out. Viewers probably will spend an hour and a half of asking themselves, “Why was this movie made?”