"A Bit Preachy and Overlong" 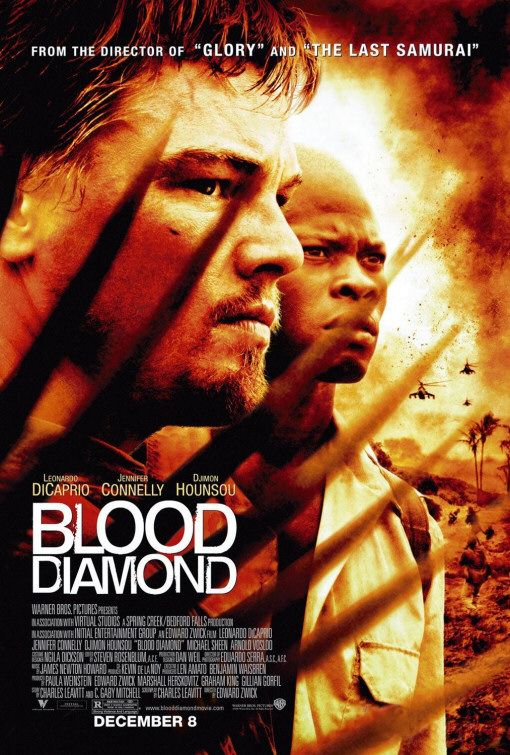 BLOOD DIAMOND stars Leonardo DiCaprio and Jennifer Connelly in a story about a cynical diamond smuggler, a female journalist and a fisherman who team up to recover a large diamond hidden by the fisherman, Solomon. Solomon hid the diamond while working in a slave labor camp run by Communist rebels in Sierra Leone in West Africa. Danny, the smuggler, and Maddy, the journalist, help Solomon, who needs the diamond to rescue his son from the rebels and free his wife and two other children from a refugee camp. The question is, Will Danny steal the diamond from Solomon once they recover it?

This is an incredibly exciting, emotionally powerful story, but the filmmakers keep interrupting it with too much war action. What also gets boring is a preachy epilogue urging consumers to stop buying "conflict" diamonds used to finance wars in Africa and showing international efforts to halt the smuggling of such diamonds. Consequently, the story and characters get lost. The filmmakers should have focused attention on the drama between the main characters rather than on their rushing around Africa avoiding bullets and explosions. BLOOD DIAMOND includes much foul language and extreme violence.

(BB, AC, Ro, Acap, PC, So, A, D, LLL, N, S, VVV, M) Strong moral worldview with some light anti-Communist content where a Communist revolutionary is seen as a major villain, diluted slightly by Romantic elements with an anti-capitalist focus that turns a large, secretive corporation into a major villain involved in a nefarious conspiracy and illegal smuggling, and by a light politically correct attitude favoring internationalist efforts to control economic markets, plus a socialist comment that the resources of a country should be divided equally among the people somehow instead of letting people compete for the development of those resources, which wouldn't be developed fully without such capitalist competition in the first place; at least 36 obscenities (including many "f" words), six strong profanities, and man pretends to squat down as if he were going to the bathroom; extreme violence with blood includes man's arm hacked off, lots of pointblank shootings and explosions during many lengthy and chaotic war scenes where civilians are often killed, several executions, child is blindfolded and ordered to fire machine gun at man being executed, vehicles crash, rocket propelled grenades explode buildings, children forced into war, bloody wounds shown, and dead bodies shown; unmarried man tries to seduce unmarried woman and there is mention of the word rape; upper male nudity; alcohol use; smoking; and, smuggling, lying, corruption, selfishness, greed, kidnapping, slave labor, etc., most of which is rebuked implicitly and some directly.

BLOOD DIAMOND is too long and a bit preachy. That’s too bad, because the basic story is very strong in many ways, and well acted.

The movie opens with a West African man in Sierra Leone, Solomon Vendy, encouraging his son, Dia, to go to school so he can become a doctor instead of a poor fisherman like his father. That day, after Solomon picks up his son on the way back from school, Communist rebels raid their village. The rebels take Solomon to a diamond mining camp on the river, but Dia and Solomon’s wife and two other children escape.

At the camp, Solomon is able to hide a large “blood” diamond from the Commander. The Commander spots the theft and tries to take the diamond away, but just then government troops show up and capture Solomon and the Commander, who becomes unconscious after losing his left eye. Solomon buries the diamond before the soldiers capture them.

Meanwhile, a cynical white diamond smuggler and soldier of fortune named Danny, born in Rhodesia (now Zimbabwe), gets arrested in Sierra Leone trying to smuggle diamonds into Liberia. In Liberia, where customs officials are corrupt, the illegal “conflict” diamonds are secretly smuggled to England, where they are cut and shipped to America.

Danny, Solomon and the Commander end up in the same jail together. The Commander accuses Solomon of hiding the large diamond, and Danny overhears. Danny decides to help Solomon get out of jail so that he can make Danny tell him where he buried the diamond.

After a amazing, harrowing escape from rebel troops invade and take over the capital city, Danny and Solomon make their way to the refugee campo where Solomon’s family is encamped. They do this with the help of a pretty white female journalist from America, Maddy. Maddy wants Danny’s help in exposing the vast illegal diamond trade that has helped create so much war and bloodshed in Sierra Leone. Danny is only interested, however, in helping Solomon get the hidden diamond.

At the refugee camp, Solomon learns that the rebels took his beloved son to train Dia to become a bloodthirsty Communist rebel. He also learns that the authorities won’t release the rest of his family because they fear his family are rebel sympathizers.

The only way Solomon can get back his family is to use Danny’s help to get to the camp where Solomon hid the diamond. Solomon’s story touches Maddy. She knows that only Danny will be able to get Solomon to the rebel mining camp and back safely. Thus begins a dangerous journey to help Solomon. The question remains, however, will Danny steal the diamond from Solomon once they recover it?

This is an incredibly exciting and emotionally powerful story, but the filmmakers keep interrupting it with too much war action. Thus, the story of the three main characters is often interrupted by an abundance of action where the characters are trapped in the crossfire between the rebels and the government forces in Sierra Leone. This gets tiresome and boring. What also gets boring is a preachy epilogue urging consumers to stop buying “conflict” diamonds and containing references to international efforts to halt the smuggling of such diamonds.

Some excellent, profound metaphors get lost in all this boring war action and politics. This dilutes their thematic power. The filmmakers should have tightened up the script to focus more on the story and drama among the main characters instead of focusing so much on the political ideas and the cinematic spectacle in their movie. What they have done is a disservice to the actors, who needed more time honing their relationships than rushing around Africa avoiding bullets and explosions. In fact, much of the action spectacle in this movie has just as much to do with the filmmakers’ desire to make political and economic points as their desire to thrill moviegoers. Edward Zwick, the director (GLORY, COURAGE UNDER FIRE, THE SIEGE, and THE LAST SAMURAI), often seems to get trapped into making the politics in his thrillers and war dramas a bit too complex, dry and earnest. It often sucks the drama and life from the stories he wants to tell and the characters he wants to develop. Thus, BLOOD DIAMOND is not as effective as it could have been, or as powerful as the movie’s excellent performances try to make it.

BLOOD DIAMOND contains a significant amount of foul language and lots of very strong violence. Although moral, its worldview is mixed with some light liberal politics that tries to lay a small guilt trip on the western industrialized world. There’s a slightly Romantic element to this quality, where the black populace in Africa gets off a little easy in comparison to the West, including Americans, and in comparison to the whites born in Africa. The movie suggests that the white diamond smugglers, working in consort with large corrupt diamond companies, are helping to foment rebellion so that the supply of diamonds stays low and the price high. One important line of dialogue, however, says that people should be judged by what they do. One act of love can mitigate the wickedness in an evil man, another line says.

Of course, those of us who believe in the Bible as God’s Word, know, “There is no one who does good, not even one” (Psalm 14:3 and Romans 3:10). Only the grace of God can justify or absolve us morally “through the redemption that is in Christ Jesus” (Romans 3:24).