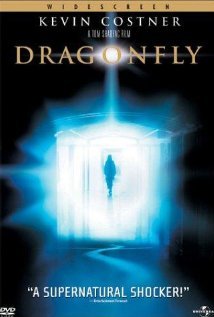 DRAGONFLY stars Kevin Costner, who plays Dr. Joe Darrow. Joe loses his pregnant doctor wife in a rock slide in Venezuela, but her body is never found. This leaves Joe in an aggravated emotional state. When the spirit of his dead wife seems to be haunting their home, their pet parrot and the near-death experiences of the children in the cancer ward where she worked, Joe turns to a Roman Catholic nun for answers. This sets up the movie’s dramatic conclusion.

DRAGONFLY is a well-made, dramatic ghost story with a very entertaining, emotionally positive conclusion. Costner displays some of the gravitas that made him a star in the first place. Nevertheless, DRAGONFLY has some grave problems in its worldview. First, although the story contains crucial scenes with a Roman Catholic nun and other Christian-related images and symbols, it fails to take full advantage of these. The movie ultimately takes a New Age view toward this Christian content and toward Joe’s occult experiences. The movie’s worldview problems and occult content make it totally unacceptable to committed Jewish and Christian viewers since the God of the Bible wants us to shun such content.

(PaPa, OOO, CC, B, Ho, PC, LL, VV, S, N, A, D, M) New Age pagan worldview includes magical thinking & occult messages involving a ghost or a person in a coma, diluted a bit by some solid Christian content featuring a Roman Catholic nun about believing in heaven and an afterlife and some apparent moral content, including the movie’s surprise ending; protagonist’s neighbor is a lesbian whose lover has died, an extraneous, politically correct subplot; 10 obscenities, 1 strong profanity and 2 mild profanities; scary, sometimes occult violence includes rock slide knocks bus into raging river, scenes in a hospital with dying child and dying man who revive, bird knocks things over while flying crazily about room when visited by possible ghost, man startled by apparent ghost, people point guns and bows, fighting, and man almost drowns in raging river; brief image of married couple clasped in each other’s arms & kissing, about to have intercourse, but no depicted sex; partial nudity in hospital setting, nude infant & partial nudity of married couple in bed but no frontal nudity in a sexual context; alcohol use; smoking; and, doctor grieving over dead wife refuses to treat a suicide patient (he only wants to treat people who want to live that day, he says) & some rude behavior.

DRAGONFLY, starring Kevin Costner, is a well-made, dramatic ghost story with a very entertaining, emotionally positive conclusion. Nevertheless, it has some grave problems in its worldview.

Costner plays Dr. Joe Darrow. Joe loses his pregnant doctor wife, Emily, in a rock slide in Venezuela, but her body is never found. This leaves Joe in an aggravated emotional state. Joe does not know how to grieve for Emily because he doesn’t believe in God, heaven or an afterlife.

Joe starts getting messages from beyond the grave, however. One message comes through one of his wife’s child cancer patients in the hospital where they worked. The sick boy says he saw Joe’s wife during the boy’s many near-death experiences. Another boy who nearly died recognizes his wife’s photo during an Easter party for the other children.

Joe becomes obsessed with the child patients in his wife Emily’s cancer ward. This disturbs Joe’s boss, who is already aggravated that Joe refuses to take a vacation to grieve for Emily. The situation gets more spooky when it appears that Emily is making ghostly visits to their house, startling even her pet parrot.

Joe desperately turns for answers to a middle-aged Roman Catholic nun (played by Linda Hunt), who got kicked out of the hospital for investigating the children’s near-death visions of the afterlife. Sister Madeline reminds Joe that, according to anesthesiologists, there are scores, if not hundreds, of levels of consciousness to human brainwaves. Joe begins to believe that his wife is not dead, but may be lying in a deep coma in a village somewhere in the jungle. His humanist colleagues and his lesbian neighbor tell him to give up these crazy ideas and come back to reality. Doubt begins to cloud Joe’s thoughts, and that sets up the story’s dramatic conclusion.

Though well-acted, shot and entertaining, DRAGONFLY cheats the audience a little bit by burying an important fact that it revealed to viewers during the movie’s opening. It has other, more important problems, however, that might take away interest from potential, committed Christian and Jewish moviegoers.

Unlike other films, ghost movies always deal explicitly with the issue of whether or not there’s an afterlife. They force the writer, director and producers to take some kind of stand on the possibility of an afterlife. They don’t, however, force them to take a stand on whether heaven exists, though most of them may, in fact, do this. The most popular ones in recent years, in fact, including GHOST and last year’s THE OTHERS, did take a stand on the existence of heaven. GHOST said that heaven does indeed exist, but it gave an occult perspective. THE OTHERS said that heaven does not exist and even went further to say that the heroine’s Christian worldview regarding the afterlife and heaven was completely false.

DRAGONFLY tries to have things both ways. It implies that the afterlife does exist, but it remains relatively noncommittal on the existence of heaven. Although it contains scenes with a Roman Catholic nun and other Christian symbols, it gives a New Age pagan answer by seeming to say that people create the afterlife and heaven through our beliefs in such concepts. This is magical thinking at its worst. At its best, it is an attempt to give a philosophical explanation for how it is possible that people can have a spiritual existence after their bodies are dead and completely inactive. After all, the nun points out to Joe, when you dreamed of becoming a doctor, you eventually made that dream, that fantasy, into a reality by applying your own efforts.

DRAGONFLY has another somewhat convoluted message to send the viewers. In this message, it tells viewers that a baby is, in one sense, the physical continuation of the souls of his mother or father. Regrettably, however, DRAGONFLY does not explicitly take advantage of God’s pronouncement in the Bible that a man and a woman will leave their own mother and father and become “one flesh.” Instead, there is a scene earlier in the movie where the hero and his wife joke about coming back to life as an insect or a bird. Implicitly, though, toward the end of its story, the movie seems to side with the biblical idea regarding children that God expressed in His Word. One only wishes that in this case and in the case of its message on the afterlife, the movie had had the courage of the Christian elements in its own images and story, to develop a different story with stronger Christian messages. Perhaps, in the future, a Christian writer somewhere will take note of this problem with DRAGONFLY and develop a more positive story.

Although DRAGONFLY contains crucial scenes with a Roman Catholic nun and other Christian-related images and symbols, it fails to take full advantage of these. Still, it provides an interesting, emotional conclusion to its story. As with its Christian content, the conclusion to its story is one of the most positive elements that DRAGONFLY has going for it. Even so, there are too many occult aspects to the conclusion, as well as the rest of the movie. Thus, the movie’s worldview problems and occult content make it totally unacceptable to committed Jewish and Christian viewers, if not Mormon and Muslim ones.

Of course, the Bible tells everyone to shun homosexuality and other sexual immorality. It also tells us to shun occult activities like communicating with a dead person. Furthermore, the Bible tells us that you must worship the God of the Bible and believe in Jesus Christ as your Divine Savior in order to get into heaven. It also teaches that those who do these things will, automatically, through the power of God, be able to serve God, Jesus Christ and their fellow human beings in a righteous manner, though not in a perfect way. In other words, you can’t just wish yourself into heaven. Self-proclaimed Christians who don’t believe any of these basic doctrines don’t really deserve the names they want to be called. Why would you want to go to heaven to be with the God of the Bible and Jesus Christ if you don’t believe in these things anyway? Thus, despite its positive elements, MOVIEGUIDE® cannot recommend DRAGONFLY.