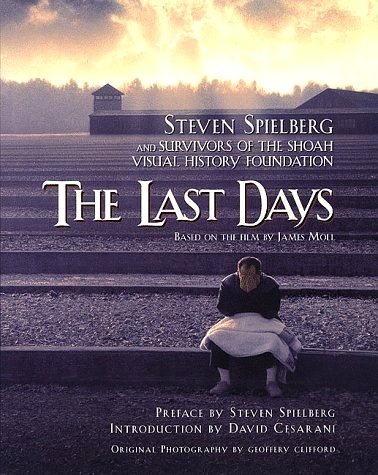 THE LAST DAYS, a documentary, focuses on the recollections of five Hungarian survivors of Nazi Germany's murderous persecution and slaughter of European Jews during World War II. It is an important history lesson that rates a caution for younger children because of disturbing images and adult subject matter.

Strong moral worldview about Nazi Germany's extermination of Hungarian Jews in the last year of World War II, including references about blaming man rather than God, Jewish icons such as a golden menorah & the Star of David, & Jewish religious prayers & songs, & praise for positive aspects of American society; 2 mild obscenities; strong, graphic images of many of the Jews & other people slaughtered by the Nazis; full male nudity & images of emaciated corpses & "walking dead"; smoking; discussion about the evil paganism of the Nazi regime; and, one Holocaust survivor mentions her brief doubts about God & some minor, politically correct comments.

THE LAST DAYS is a moving, educational documentary about a little-known aspect to World War II – Nazi Germany’s murderous persecution and slaughter of Hungarian Jews in the last year of the war. Many people forget about this aspect to the war, because Germany did not invade Hungary until March 19, 1944, after the Soviet Union’s Red Army closed in on the Carpathian Mountains. Up until that time, the Hungarian Jews had been personally protected, though discriminated against, by the relatively free Hungarian state.

This documentary reveals that the Nazi persecution of the Hungarian Jews was swift and complete. In fact, production notes for the movie quote Britain’s Prime Minister, Sir Winston Churchill, who reportedly said that this particular persecution constituted “probably the greatest and most horrible crime ever committed in the whole history of the world.”

To tell this story, THE LAST DAYS focuses on the recollections of five Hungarian Jews, three women and two men. These five people tell their stories in front of a camera at their homes and as they visit Germany and Hungary with their children and grandchildren, nearly all of whom have seldom heard the full tale of how the Nazis victimized their parents and grandparents and almost wiped out their whole families in Hungary. Both methods of testimony make for an absorbing, heartbreaking rendering of one of the two greatest crimes of the Twentieth Century, the other being the persecution of Ukrainians in the 1930s by Stalin, the leader of the Soviet Union. (The Ukrainian genocide is also often forgotten because Stalin was supported by many socialists/communists in the United States, who tried to hide their Stalinist sentiments by posing as liberals.) Interspersed among these five testimonies in LAST DAYS are interviews with three American soldiers who liberated the camps, historian Dr. Randolph Braham, who was also a prisoner in the camps, and Dr. Hans Munch, a former Nazi doctor who performed medical experiments at Auschwitz.

Steven Spielberg, the director of SCHINDLER’S LIST and SAVING PRIVATE RYAN, is the executive producer for this movie. The movie is based on Spielberg’s Shoah Visual History Foundation, which has recorded more than 50,000 video/film testimonies of Holocaust survivors, liberators and even ex-Nazis, eyewitness accounts to Adolph Hitler’s slaughter of the Jewish race in Europe.

Director James Moll keenly captures the sorrow, terror and poignancy of the survivors as they relive their experiences of the Holocaust in THE LAST DAYS. It’s a magnificent history lesson that puts a human face on this example of man’s inhumanity to his fellow man.

Such a lesson reminds us of the importance of historical eyewitness testimonies to the resurrection of Jesus Christ in the New Testament documents, testimonies which, like the eyewitness accounts of Holocaust survivors, some have tried to excise from society’s memory. It also reminds us of the terrible things that happen when a nation’s people give up their allegiance to God for an ungodly, inappropriate allegiance to the State or its political leader.

Despite these positive aspects, MOVIEGUIDE advises caution in allowing younger children to see this movie, which includes some nightmarish real photos and archival films and adult descriptions of some of the survivors’ experiences.

Viewers also should be aware that one of the five survivors is U.S. Rep. Tom Lantos, a radical from California who has in the past said some pretty intolerant, perhaps even hateful, things about Christians and conservatives. The movie should have included more of the Congressman’s recollections about his experiences, to justify the inclusion of such a controversial political figure in such an important documentary.

Interestingly, one of the survivors in the movie, Renee Firestone, says at one point, “God gave us a mind and a heart. I blame man, not God (for the Holocaust).” The historian, Dr. Braham, echoes her comments at the end of the documentary when he notes that crimes like the Holocaust occur “when man loses his belief in the sanctity of human life.”