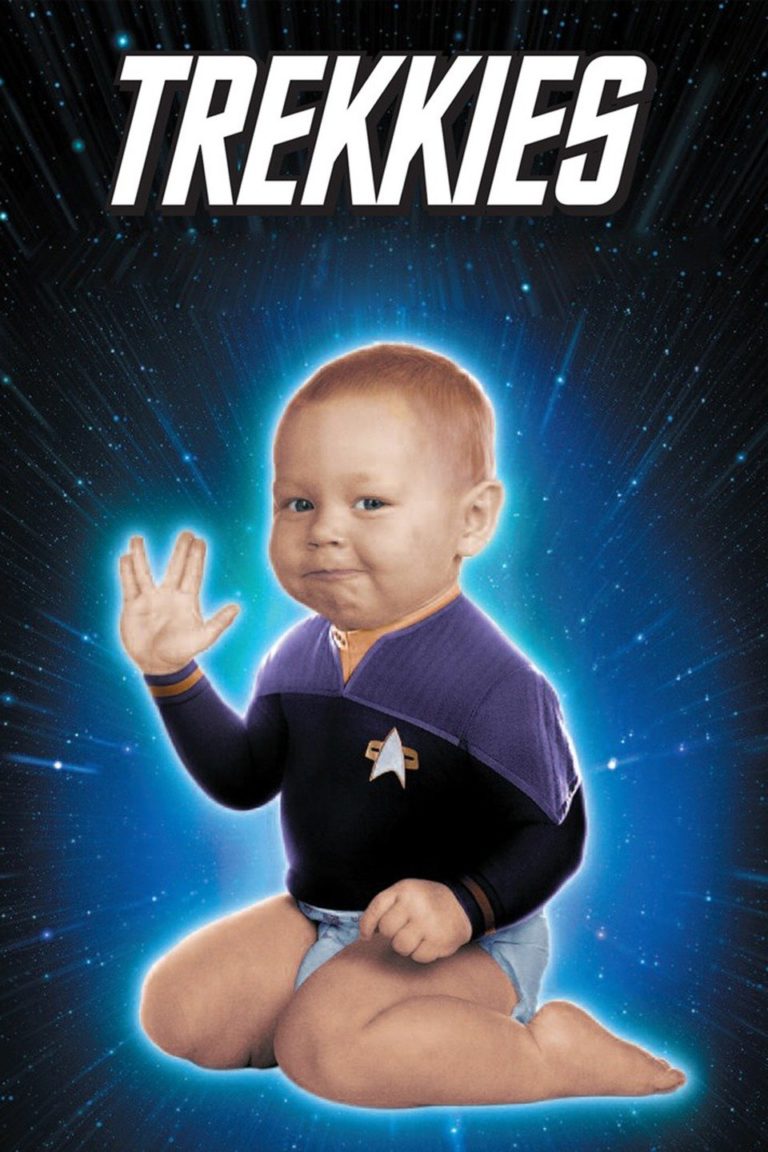 TREKKIES is a humorous, insightful movie that explores the obsessive behaviors and minutiae of the world of STAR TREK and its fans. Interviews with fans and former cast members alike reveal their false hope for a better tomorrow. It may be O.K. to enjoy these programs and sometimes be inspired by them, but no man-made movie or television program can ever replace the true, wonderful, miraculous love of our otherworldly Creator.

Strong Humanist worldview of STAR TREK supporters who think the future can be bettered through human efforts; 3 exclamatory profanities; drawing of nude cast members engaged in fornication; depicted transvestite & gay Trekkies talk about the benefits of watching the program; smoking; and, lots of obsessive behaviors depicted.

Did you know that “Trekkies” are the only fans listed by name in the Oxford English Dictionary? Did you know STAR TREK is seen in more than 100 countries and has been translated into dozens of languages? Did you know the U.S. Space Shuttle “Enterprise” was given its name after NASA received 400,000 requests from STAR TREK fans? These and other minutiae are explored in the humorous, insightful, but misguided and actually false view of those who believe in our future.

Obviously filmed low-budget, TREKKIES introduces the viewer to the craziest of the craziest “Trekkies,” as well as past and present cast members of the various series. One of the fans is Barbara Adams. She was chosen for jury duty in the Whitewater trial in Little Rock, Ark. and wore her Starfleet Commander Officer’s uniform at the trial. She never leaves home without her rank pips, tricorder, phaser, and communicator badge.

Gabriel Koerner is an intelligent 14-year-old from Bakersfield, Calif. who has attended 28 conventions to date. He and his STAR TREK club are planning to shoot their own STAR TREK movie.

Dr. Denis Bourguignon is a dentist in Orlando, Fla. whose office is called “Starbase Dental.” He, his wife Shelly and his entire staff wear STAR TREK uniforms. Everywhere you look there is trekabilia.

The audience also meets Joyce Mason, the on-air host of the “Talk Trek and Beyond” radio show, and David Greenstein who would pay for plastic surgery to give his ears Vulcan-shapred points, and a woman who runs a club called “Data Femmes” and collects all things related to Commander Data from “The Next Generation” cast.

Intercut with the Trekkies, Denise Crosby, former cast member from “The Next Generation,” leads the viewer on a journey, giving an overview of this multi-faceted phenomenon, including the conventions, the costumes and the fan clubs.

Regrettably, no matter how amusing or committed these folks are to a seemingly friendly future, they are living a lie. Their obsessive behaviors are the first clue to an imbalanced lifestyle, and their devotion reaches cult-like status. While it is nice to hope for a kinder, gentler future, no blessing can occur without God’s grace. The world of STAR TREK implies that man can create his own Utopia. Scripture, however, indicates that the future may hold great tribulation and eventually will end with an Apocalypse. Grim, for sure, but no man can deter a course of events predetermined by God.

Still, these people exhibit a twisted sense of hope in the divine. C.S. Lewis became a Christian in part because of the inspiration he received from science fiction and fantasy stories and from music by Wagner. He realized that his craving for this otherworldly material was a God-given desire that God gives to all of us for the divine. We are spiritual beings and are designed to fellowship with the divine, witness His miraculous and fantastic power and to hope for a beautiful eternity with Him.

No doubt when you read this review, America will already have demonstrated its fascination with the fantastic as it devours the new STAR WARS movie. It may be O.K. to enjoy these programs and sometimes be inspired by them, as a reflection of what our God-given imaginations can dream up, but no man-made movie or television program can ever replace the true, wonderful, miraculous love of our otherworldly Creator. He alone, not George Lucas the creator of STAR WARS or Gene Roddenberry the creator of STAR TREK, makes us new creatures and creates a remarkable home for us in Heaven.