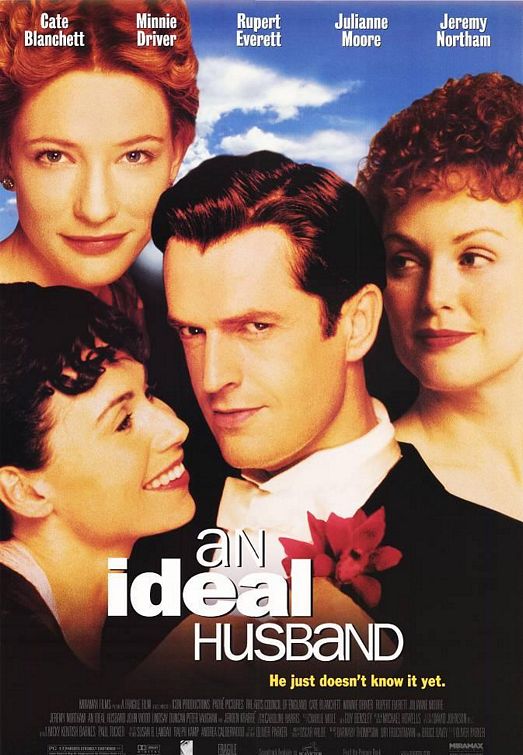 AN IDEAL HUSBAND proves the ideal comedy, thanks to its respectful adaptation of Oscar Wilde's original play of the same title. Rupert Everett plays the shiftless Lord Arthur Goring, a wealthy bachelor who spends most of his time admiring himself in the mirror and charming the ladies of his upper-crust social circle. Containing mild sexual innuendo, a brief sexual encounter & only a few profanities, this movie shows that, in the end, love and honesty win out.

At last! A delightful comedy that is wise and charming. AN IDEAL HUSBAND is almost the ideal comedy, thanks to its respectful adaptation of Oscar Wilde’s original play of the same title. Although his writing can be sophomoric and shallow, Oscar Wilde’s writing can also be unmatched in its insight into frail human nature and its clever turns of phrase. Fortunately, director Oliver Parker uses Wilde’s wit to its finest advantage, producing a hilarious comedy of manners that, even though set in 1895, is as fresh and relevant as the day Wilde wrote it.

AN IDEAL HUSBAND stars Rupert Everett, the singularly gifted homosexual comedian who co-starred in the 1997 picture MY BEST FRIEND’S WEDDING. Everett plays the shiftless Lord Arthur Goring, a wealthy bachelor who spends most of his time admiring himself in the mirror and charming the ladies of his upper-crust social circle. Lord Goring’s life of leisure suddenly becomes complicated when an old flame returns to town, the scheming Mrs. Laura Cheveley, played to devilish perfection by Julianne Moore. Mrs. Cheveley, who has a reputation for stirring up scandal, soon reveals that she possesses a letter proving that Lord Goring’s bosom friend, Sir Robert Chiltern (Jeremy Northam), bought his way into Parliament. She then attempts to blackmail Sir Chiltern, who is known throughout his community as an upstanding man of honor, and, to his worshipful wife, Lady Gertrude Chiltern (Cate Blanchett), as “an ideal husband.” Fearing public castigation and, most of all, his wife’s contempt, Sir Chiltern must decide whether to expose his long-buried sins or commit new ones to conceal his past.

As Sir Chiltern’s friend and the object of Mrs. Cheveley’s desires, the foppish Lord Goring soon becomes entangled in her conniving scheme. Mrs. Cheveley eventually tries to blackmail Goring, too, by offering to hand over the incriminating letter if he marries her. Meanwhile, Lord Goring busily fends off his father’s exhortations to get married while nurturing the affections of Mabel Chiltern (Minnie Driver), Sir Chiltern’s sister.

If all of this sounds complicated, it is, but the plot continues to unfold in new, unexpected ways that thrill rather than bewilder. Furthermore, Rupert Everett’s hilarious turn as the weary dandy with a heart of gold is simply delightful. The other actors do a fine job as well, especially Ms. Driver as the saucy Mabel, in whom Lord Goring meets his witty match.

The best part of AN IDEAL HUSBAND is its clever dialogue. Wilde’s rapier wit embodies both hilarity and compassionate wisdom about the fragile human condition. As interpreted here, his play conveys a powerful message about morality without sermonizing. The likable characters become hopelessly mired in their own deceit. It is a perpetual pleasure to watch them wriggle, struggling to extricate themselves. In the end, love and honesty win out (but not without a fight!), and moral ideals triumph. The movie warns us against putting our fellow human beings on an unrealistic moral pedestal. The wife in the movie, Lady Gertrude, totally idolizes her husband for his moral fortitude. He in turn worships her for the same.

Thus, AN IDEAL HUSBAND points out that although we all have “feet of clay,” it is still for striving for ideals, though they are unreachable in our imperfection. Of course, it doesn’t require much of an intellectual stretch to conclude that only God is ideal, and that only His work in our hearts can allow us even to approach any ideal. Although it’s not a Christian movie by any means, the message is that we shouldn’t elevate mankind to god-like status, which is surely in line with Christian tenets that all men are sinners who can only be saved by God’s grace.

In AN IDEAL HUSBAND, Oliver Parker has delivered a warm comedy of manners that hearkens back to the days before Hollywood decided that humor had to be physical, crude and obvious. Anyone who delights in the English language, who enjoys ingesting a little wisdom while being hugely entertained will enjoy this movie. This is the best, smartest comedy to come along for some time.

Regrettably, however, the movie contains subtly implied fornication, a man fondling a widow’s breast, and a very brief flash of a nude woman in the background in the opening scenes.

Writer: Oliver Parker BASED ON: A play by Oscar Wilde