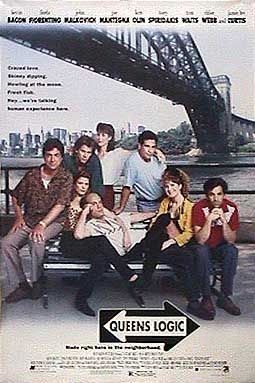 Five guys from the old neighborhood get together in Queens, N.Y. to share an emotionally explosive and cathartic weekend, as they reunite for a friend's upcoming marriage.

A wedding reunites five guys from the old neighborhood in QUEENS LOGIC, a “serious comedy” depicting childhood friends, now all in their 30s, who gather in Queens, N.Y., to find out if “you really can go home again.”

“Da guys” are: Dennis, a struggling musician who flies back to Queens from Hollywood, where he has been scrounging for jobs; Vinnie, a fledgling actor living in Manhattan; Al, who stayed in Queens, works in the fish business and chases girls; Elliot, a repressed homosexual who works for Al and resists making concessions to what he deems the gay lifestyle; and, Ray, an artist who dreams of painting frescoes in Italy.

Ray is the one getting married. The bride-to-be is his live-in girlfriend, Patricia, a hairdresser who knows her man is getting cold feet. While Ray suffers last minute doubts, Al has marital troubles of his own with his wife, Carla. When Al comes home late on the night of their wedding anniversary, Carla leaves to commiserate with Patricia.

Events continue to build toward the “will he, or won’t he” wedding ceremony, as all seven friends throughout the weekend face their past and present, coming to grips with their problems and idiosyncrasies. The imminent wedding makes the characters grapple with growing up and wonder how, all of a sudden, they ever became adults without having any answers.

The movie’s title refers to friends supporting friends, and that’s what they do in the movie. The gang pushes for Ray’s wedding, helps mend Al’s marriage and plays matchmaker for Elliot. In between, the boys even do some growing up. The scene best representing this coming-of-age notion occurs when Al climbs the Hell Gate Bridge in a dangerously futile attempt to prove he is still the fearless wonder of his youth.

Although the picture is quite well-acted, the bad unfortunately outweighs the good. Jamie Lee Curtis appears as a psycho/guardian angel to help Al work through his ill-defined marital foibles. In one scene, she puts a gun to Al’s head and orders him to change. Furthermore, there is a lot of binge drinking, and sexual promiscuity is condoned.

As for the bitter gay character who doesn’t like other gay men, Elliot hasn’t had sex with anyone, let alone a relationship, for years. However, since the heterosexual men don’t like women, Elliot’s trait does not appear particularly homophobic. This is a character development inserted by a kowtowing script writer so as not to offend homosexuals, while still presenting homosexuality as a viable alternative lifestyle, which the Bible says the Lord detests.