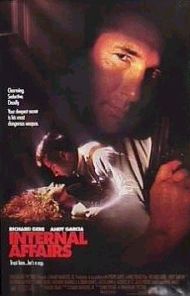 Several obscenities; nudity and adultery; wife abuse; parricide, fratricide and other murders; lying and deceit; lewd sexual talk and innuendos; and, excessive use of alcohol.

Dennis Peck, a streetwise Los Angeles cop, knows when to bend or break the rules, even if it means planting a knife on a shooting victim to keep another policeman in the clear. He is soon at odds with Detective Raymond Avila, an honest policemannewly assigned to the Internal Affairs Division, whose function is to investigate misconduct cases.

Through a routine investigation of an excessive use of force case that involves Peck’s brother, Van, who is also a cop, Avila and his partner, Amy, become convinced that Peck is the mastermind behind an extensive network of corruption. When Avila and Amy gather evidence that will convict Van, Peck responds by planning his own brother’s death. Not quite dead, Peck finishes the job by strangling him.

Peck then attempts to psychologically manipulate Avila by convincing his wife that Avila is really the bad guy while he is on the level. After Peck shoots Amy, Avila eventually corners Peck in his bedroom with his wife and kills him.

Here are the reasons why this film deserves an evil content rating:

– parricide (the murder of one’s parents) is discussed.

– fratricide (the murder of one’s brother) is carried out.

– one-second, black & white scenes of graphic erotica of Peck in bed with Avila’s wife are featured (these seem designed to arouse on a subliminal level in the way subliminal movie ads did, appearing for only 1/16th of a second).

– so many obscenities are used in the film that the people in the theater began using them out loud, too.

– Peck (Richard Gere) has sex with every female in the cast, including adulterous sex with his brother’s wife (hence, the double meaning of the film’s title, “Internal Affairs”).

Still, there’s more: lewd sexual talk, innuendos and dress; demonized wife-abuse; lying, deceit and treachery; excessive use of alcohol; and, a police officer enticing another to commit murder. Added to this seedy underworld of corruption, prostitutes, bars and drugs is a baffling plot line with hard-to-hear dialogue. The film makers, who have conspicuously placed their sponsor’s products for all to see, have also tried, unsuccessfully, to copy Hitchcock in some of the so-called suspense scenes. So far, this is the worst film of the decade.