THE GODS MUST BE CRAZY II 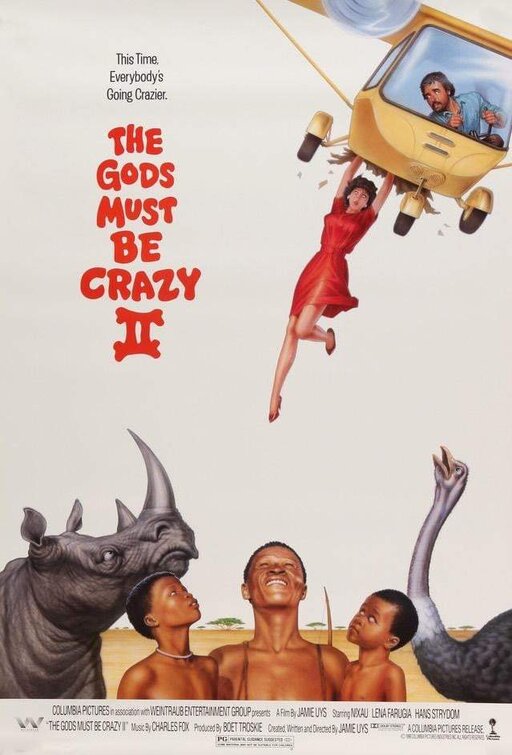 Nothing objectionable (except for one minor occurrence of impropriety in dress)

N!Xau finds himself once again in the South African wilderness with what he deems are crazy large white people who do not seem to understand nature or common sense because they, unlike him, cannot read tracks in the ground or obtain water from a coconut.

Flying overhead, a city girl and her pilot guide get their small plane caught in a tree (Though there is no nudity, the girl’s undergarments are shown before they can get down). Meanwhile, N!Xau loses his two sons unawares to illegal bounty hunters. The boys have some fun, though, escaping from the truck/trailer while on the move. The scene includes some great moments of brotherhood, playfulness and innocence.

Back at the crippled plane, the girl manages to get the aircraft into the air, but leaves the pilot guide behind. Both have humorous run-ins with the natives and nature as they attempt to re-unite. More slapstick occurs when South African and Cuban military scouts begin chasing and apprehending one another. When two of the scouts stumble upon the girl, she hits them over the head with a purse full of rocks.

The story progresses in a humorous vein, with N!Xau coming to the aid of the collapsed pilot. The bounty hunters are apprehended, the scouts go their own way, and the pilot and girl get their plane going. In a tongue-in-cheek James Bond ending, the plane touches down with a parachute covering the pilot and girl as they kiss.

The film’s premise seems to indicate that our complex Western civilization has gotten out of control, and that a “primitive” culture at peace with man and nature is better. Although it is true that our Western civilization, with all the trappings of technology and convenience, can be “out of touch,” we know that great peace can only be achieved through Jesus Christ, and not any other way. Furthermore, this Rousseau “back to nature” philosophy ignores the fact that all men are sinners and primitive cultures are often the most vicious, warlike and even cannibalistic.

However, apart from that observation, this is a fun movie, with tricky animal photography, that allows us to laugh at ourselves and remind us that we cannot take ourselves too seriously. As the film shows through N!Xau, having one’s family together is of greatest importance.