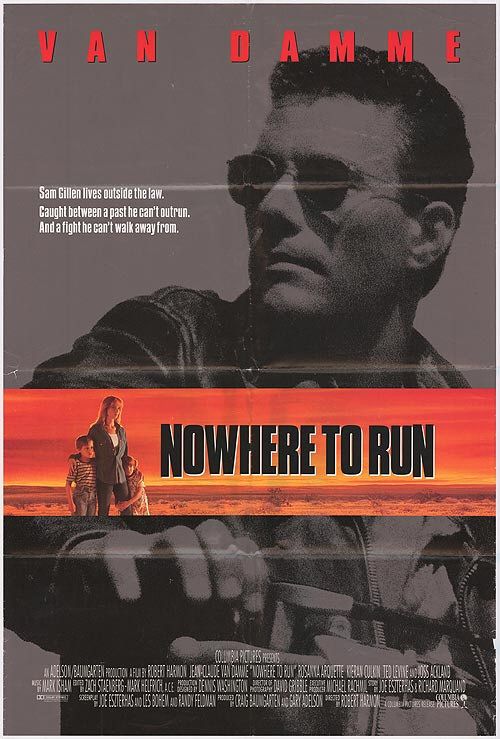 NOWHERE TO RUN, a politically correct action movie starring Jean-Claude Van Damme, tells the story of an escaped convict, Sam, who falls in love with a lonely widow with two small children and helps her save her country farm from an evil land developer. Van Damme sheds his martial-arts image in this film and displays a romantic, sensitive side. However, the movie contains nude scenes and graphic violence.

NOWHERE TO RUN, a politically correct action movie starring martial-arts expert Jean-Claude Van Damme, tells the story of an escaped convict, Sam, who falls in love with a lonely widow with two small children. Sam’s life and Clydie’s (the widow) become intertwined when he seeks refuge at her farmhouse. Clydie befriends Sam, and he helps her when he wards off a group of thugs sent to persuade her to sell her house to an archetypal greedy land developer. An admirable “father/son” relationship develops between Clydie’s son and Sam. Sam makes a series of moral choices in the film and has to choose to save himself or his friends, and he also repents for his past criminal actions, choosing to face the consequences of his actions rather than spend the rest of his life on the run.

While NOWHERE TO RUN is basically a formula movie with a predictable plot and trite dialogue, Jean-Claude Van Damme has succeeded in shedding his one-dimensional image of an actor whose only asset is his martial arts skills. Here, he displays a sensitive side that emphasizes the value of life, rather than a lust for killing. For those reasons, NOWHERE TO RUN deserves limited praise; however, one must realize that this movie still has a long way to go before it can be considered wholesome family entertainment since there are a few nude scenes and graphic violence that will be offensive to moral viewers.