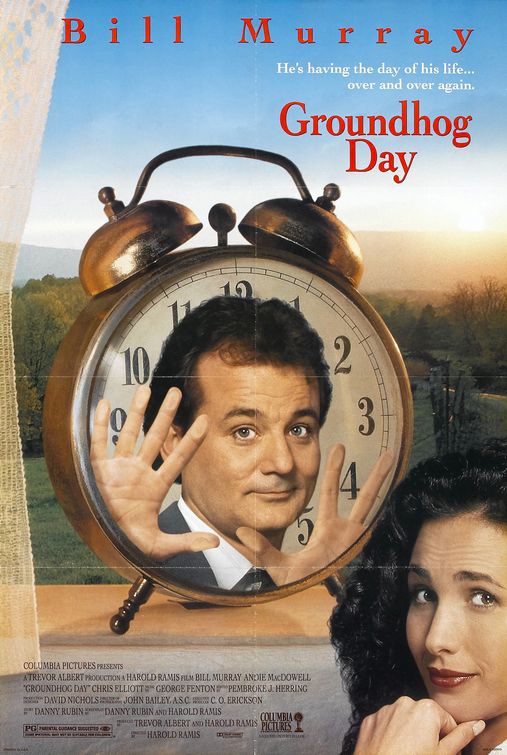 Being forced to live the same day repeatedly and concluding that evil behavior does not warrant the consequences, Phil Connors (Bill Murray) learns that there has to be more to life than one meaningless GROUNDHOG DAY as he finds a romance that transforms him. Although GROUNDHOG DAY falsely implies that man can save himself, the film is humorous, lighthearted and fun, and a discerning viewer will come out ahead as he learns "There is nothing new under the sun."

(H, B, L, V, S) Humanist rendition of the biblical principle that one can only gain one's life by giving of one's self. Slightly marred by 2 mild obscenities & 2 exclamatory profanities; moderate violence in suicide attempts in fantasy context, but no permanent effect; sexually suggestive dialogue with references to intercourse & 1 passionate kissing scene; 2 incidents referring to homosexuality: and, man mentioned as being homosexual & man acts like a homosexual.

Being forced to live the same day repeatedly, Phil Connors (Bill Murray) learns that there has to be more to life than a meaningless GROUNDHOG DAY. Set in Punxsutawney, Pennsylvania, Phil, a TV weatherman, has been sent to cover the annual Groundhog Day festivities and finds himself caught in a time warp. The alarm relentlessly wakes him with Sonny and Cher’s “I Got you Babe.” Stretching in his room, Phil is set for a day of recurring incidents and no surprises, so he surmises, “No tomorrow, no consequences–we could do whatever we wanted!” Experiencing all that life can offer, Phil has a change of heart and becomes the ultimate moral human being: he saves lives, spreads cheer and acquires culture. He has learned the error of his ways–but is his goodness enough to save him?

Although GROUNDHOG DAY emphasizes that man desires not to be accountable for his deeds, it falsely implies that man can save himself from his sinful propensities. Even so, the film is humorous, lighthearted and fun though somewhat redundant. Thus, a discerning viewer will come out ahead as he learns “There is nothing new under the sun.”