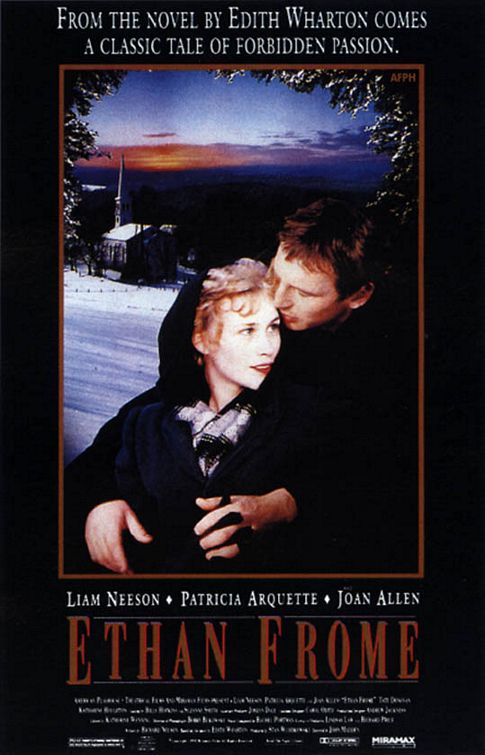 ETHAN FROME is based on Edith Wharton's 1911 novel that represents the "classic" tragic love affair, berthed from spiritual despair. The film provides a fine example of telling a story about immorality without resorting to nudity or sex. ETHAN FROME sets forth definite Christian principles, and scriptural references are given throughout the film.

(B, C, S, V) A classic told without the use of bad language or nudity about biblical principals and scripture about love and forgiveness wherein: a couple enters into adulterous relationship, but nothing is shown; there is a dead fox & a brief shot of injured people; and, redemptive moral content.

In the movie ETHAN FROME, based on Edith Wharton’s 1911 novel, we are first introduced to a crippled Ethan (Liam Neeson) hobbling about his hometown of Starkfield, Massachusetts, through the new preacher. Ethan returned to his village to care for his ailing mother. Zeena, a distant relative, comes to help Ethan and ends up marrying him after his mother’s death. However, in their first year of marriage, Zeena becomes ill, and Ethan is faced with years of caring for an embittered hypochondriac. Later, Zeena’s cousin Mattie comes to live with the Fromes to help care for Zeena. Before long, Providence intervenes and a hopeless despair sets in for both characters.

The audience is drawn to each character. The biblical principals of charity and love are played out in an unusual ending. The film provides a fine example of telling a story about immorality without resorting to nudity or sex. Longing stares and glances take the place of embraces. ETHAN FROME sets forth definite Christian principles, and scriptural references are given throughout the film. ETHAN FROME is an excellent example of the complexity of sin and how its devastating effects touch all involved.

Producer: Richard Nelson BASED ON THE NOVEL BY: Edith Wharton