"The Bleakness of Life" 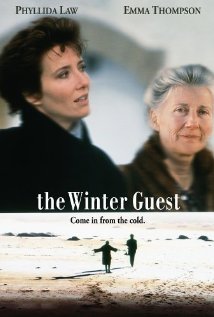 THE WINTER GUEST is less concerned about story than about presenting metaphors for life and death. The movie features the pairings of four characters on the coast of Scotland during the cold of winter. Frances (Emma Thompson) seems to have given up on life after having lost her husband. The question is whether or not Frances will move with her son, Alex, to Australia. Her mother finds it difficult to admit to her daughter that she does not want to be left alone. Alex, in the meantime, has made contact with Nita, who kindles sexual feelings in him. Two elderly women, Lily and Chloe, attend funerals. Tom and Sam, two young lads skipping school, discuss whether they should risk walking out upon the frozen sea where they might fall through the cracked ice.

In THE WINTER GUEST, the rocky, cold landscape and the vast expanse of frozen sea accentuate a stark portrayal of the vanities of life. However, language and topics of conversation are often offensive, and the message of the film is one of hopelessness. Life is nothing more than a series of meaningless events leading to death. The slow development and objectionable language, bleak conversations, and nudity to make THE WINTER GUEST problematic viewing.

One should not go to THE WINTER GUEST expecting to see your usual Hollywood film with three-act structure. It is an ensemble piece containing a character study of some interesting personalities, as well as an examination of an overall mood. It is less concerned about story than it is about presenting metaphors for life and death.

THE WINTER GUEST features the pairings of four characters and a slice of their lives on the coast of Scotland during the cold of winter. First, Frances (Emma Thompson) seems to have given up on life after having lost her husband, Jamie. The question that is pressing on her and on her mother, Elspeth (Phyllida Law), is whether or not Frances will move with her son, Alex, to Australia. Elspeth is a stubborn old woman who finds it incredibly difficult to admit to her daughter that she does not want to be left alone. After Frances and Elspeth hike along the coast, they return to the cottage to warm themselves and explore future possibilities. Second, Alex, in the meantime, has made contact with a precocious young lady, Nita, who kindles sexual feelings in him. The third pairing follows two elderly women, Lily and Chloe, whose chief activity in life is to attend funerals. Lastly, Tom and Sam, two young lads skipping school, discuss many issues of interest to boys of their age, but the dramatic question is whether they should risk walking out upon the frozen sea where they might easily fall through the cracked ice (again a vivid metaphor).

The filmmakers succeed in evoking a strong, brooding mood and in making a philosophical statement. The rocky, cold landscape and the vast expanse of frozen sea accentuate a stark portrayal of the banalities of life. Indeed, director/writer Alan Rickman, known chiefly for his acting, succeeds ably in this regard. The characters of the piece do not know how to express what they want or how to avoid what they do not want. He does not rush to reveal the nature of their fears but lets them unfold slowly, perhaps much too slowly.

Here is the weakness. The film is very much an actor’s piece, and will fail to entertain those looking for structure, while engaging those who are patient and inspired by character development and metaphoric revelation. Chloe’s fear to board a bus going to the location of a funeral shows her fear of death. Stagnant photographs which Frances shoots are devoid of emotion and life. Australia might mean that Frances wants to run away; while for Elspeth, it may mean abandonment. Photographs of Alex’s father “haunt” the cottage and stand in the way of fulfilling passions. We also see kittens left to die in a cave as the tide rises and the frozen ice floes. Together, they leave a bleak, depressing view of life and death.

The cinematography and musical score add to the mood of the script and accentuate the fine performances by the actors. Regrettably, the high number of profanities and obscenities are particularly disturbing in that they are mostly spoken by the child actors.

The worldview of the film is essentially pagan. There are nominal Christian elements depicted (the Christian funeral and instances of prayer), but they are portrayed merely as cultural or humorous. The message of THE WINTER GUEST appears to be that there is no point to life except to experience what we can before death ends it all. There is no solace except for the comfort we find in our present relationships.

One might as well risk walking on thin ice, as the boys ponder, since we are all walking blindly into the unknown. This is, of course, not the view of the Bible. Mankind does have purpose. There is eternal hope to look toward after physical death; and, there is accountability to an omnipotent Creator who will judge between the wicked and the righteous.