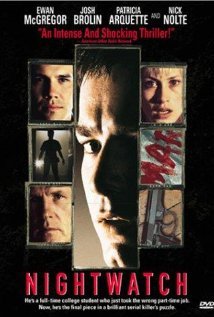 In NIGHTWATCH, the central character is Martin Bells, played by Ewan McGregor, a law student who needs to earn money to pay for school. He takes the night watchman position at the city morgue and sees a naked prostitute victim when she is brought into the morgue. Inspector Cray informs him of all the details of the case. When Martin experiences strange happenings around the morgue, he is accused of murder and rape. Finally, the story comes back to the morgue, resulting in a disclosure of the identity of the true murderer.

The script and direction in NIGHTWATCH takes the film on an unoriginal journey, copying styles similar to Alfred Hitchcock, Quentin Tarentino and David Lynch. Though containing some interesting dialogue, the script is unoriginal. The preview audience actually laughed when the film was making significant plot changes. The movie's excessive use of language and violence takes away appeal for the Christian audience, not to mention the grisly subject matter. The lack of redemptive value given to the central characters makes them unappealing. Suspense thrillers rely on great dialogue and visual twists to make them fun to watch. NIGHTWATCH was delayed a release for months. Now we know why. It was DOA.

NIGHTWATCH is an attempt to make a Hitchcockian version of SEVEN. This film has the basic serial killer premise to establish a probability of guilt by most of the male characters in the story.

The central character is Martin Bells (Ewan McGregor), a law student who needs to earn money to pay for his last semester of school. He takes the night watchman position at the city morgue. He is the only watchman who has to do the rounds every hour through all parts of the medical examiner’s building. His job at the morgue begins while a serial killer is murdering the city’s prostitutes. Martin gets to see a victim when she is brought into the morgue. Inspector Cray (Nick Nolte) takes a liking to Martin and begins to inform him of all the details of the case. Martin then begins to experience strange happenings around the morgue, including a neurotic duty doctor who questions Martin on his mental state or potential drug usage. Inspector Cray also manages to show up at opportune times, questioning Martin’s competence and potential link to the murders.

Some of the events tying Martin to the murders are the personal “challenges” that he and his friends undertake. Martin is in law school, has a night watchman job, but still manages to go out with his circle of friends almost every night of the week. His best friend, James, has some strange need to challenge his friend to new and twisted experiences, including involvement with Joyce, a 17-year-old prostitute. After a meeting in a restaurant, Joyce begins phoning Martin and asking him to meet her. Joyce then calls Martin’s girlfriend, Katherine (Patricia Arquette), and tells her of Martin doing wrong.

At the morgue, the original corpse is found on the floor, a victim of rape. Everyone suspects Martin. The police question him and get a semen sample to clarify his involvement. Katherine goes to confront Joyce again and finds her murdered in her apartment, while the murderer is in the apartment. Katherine runs out before seeing his face. The story then all comes back to the morgue in a ridiculous chase scene, ending the movie.

The storyline lacked originality and suspense. The script takes the movie on an unoriginal journey, copying styles similar to Alfred Hitchcock, Quentin Tarentino and David Lynch. Though containing some interesting dialogue, the script has nothing we have not seen in recent films. The audience actually laughed when the film was making significant plot changes. The story involved too many characters for it to be a believable and concise production although the editing kept the audience off balance to ensure their unawareness of the actual murderer. This still did not make the ending surprising when the identity of the killer was revealed.

Like many of these suspense thrillers throughout film history, the originality comes from the story, but also depends on strong performances by the lead characters. McGregor gives a stale performance that does not connect the audience with his character. He is the only law student in history who is interrogated by the police and gives them a semen sample without a lawyer present. Arquette continues to play the plastic stereotypes of women who stay by their man regardless of the evidence against them. Nolte is a good villainous police officer, but he is left with recycled dialogue from past suspense thrillers that leave his role flat. The Old Watchman played by Lonny Chapman is the one character that the director could have expanded since he has the best lines in the film.

The movie’s excessive use of language and violence, not to mention the grisly subject matter, diminishes the movie’s appeal. The lack of redemptive value given to the central characters makes them unappealing. Suspense thrillers are reliant on great dialogue and visual twists to make them fun to watch. NIGHTWATCH was delayed a release for months. Now everyone knows why. It was DOA.