THE OBJECT OF MY AFFECTION 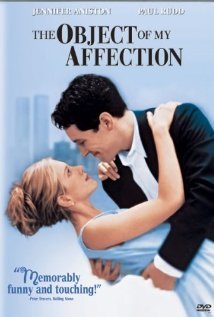 With a politically correct agenda in a contrived storyline, THE OBJECT OF MY AFFECTION baits the romantic comedy audience with Jennifer Aniston and gives a blatant pro-homosexual message. The story opens with George Hanson opening a play cast with the first grade class he teaches. Afterwards, George is dumped by his male lover and kicked out of his home. Nina offers George a place to live. Nina's boyfriend Vince, a loud and obnoxious cad, is threatened by this move. Nina is attracted to George because he is fun and everything else Vince is not. Complications arise when Nina finds out she is pregnant with Vince's child. Nina breaks up with Vince and asks George to help raise the child.

This movie couldn't be more politically correct if it tried. The heterosexual men are primarily seen as cads or sexual hound dogs. If they are nice, they are either homosexual or pro-homosexual. In this movie, everyone is a victim and a hero, everyone has to learn a lesson and everyone finds someone to love if they can just learn to "get along." This clear proselytizing is augmented by a homosexual kiss and two men in bed. Romantic heterosexual couples beware.

A year ago, a movie entitled CHASING AMY was released about a man who falls in love with a lesbian. An indie hit, its audience was limited to graphic sexual talk and obscenity use. Now, CHASING AMY light is released with the sex roles reversed, the language toned down a bit, but all the political correctness it can fit within its manufactured storyline. The movie is called THE OBJECT OF MY AFFECTION and stars Jennifer Aniston from television’s FRIENDS and a few older, well-established actors to lend credibility.

The story opens with George Hanson (Paul Rudd) opening a play cast with the first grade class he teaches. We soon learn that George’s lover, a male professor in town, did not make it to the play. In fact, the lover came later to dump George and kick him out of their home. At the play, however, was social worker Nina (Jennifer Aniston). She tells George she has an extra room at her apartment and that he can live there until he finds his own place.

Threatened by this move is Nina’s boyfriend Vince, a loud and sometimes obnoxious cad. It turns out Vince has reason to worry. Though George makes it clear he is homosexual, Nina becomes very attracted to George because he is fun and caring and everything else Vince is not. Complications arise when Nina finds out she is pregnant with Vince’s child. Through deep searching and circumstances, Nina decides she wants to break up with Vince and asks George to help raise the child. George agrees and Nina thinks she is on her way to converting George. In fact, she wants to marry him.

Regrettably, she gets a dose of cold water when she sees George’s wandering eye. George’s old flame resurfaces, and he develops an unexpected relationship with a theater student. Now, Nina is threatened, not only with loosing a roommate, but without a friend and a male presence in her child’s life. After all the kinks are worked out, the story is resolved where everybody has the lover of their preference, yet everyone remains close and friendly.

It seems like the bait for this propaganda film is Jennifer Aniston and the reel is the pre-tenses of a romantic comedy with bouncy music, dancing and funny characters. Yet, beware: young couples expecting a date movie will be in for a shock. This movie couldn’t be more politically correct if it tried. The straight men are primarily seen as cads or sexual hound dogs. If they are nice, they are either homosexual or pro-homosexual, like the Alan Alda character. Nina is seen as a very patient and considerate person, while her rich aunt is portrayed as a vanity-seeking, frivolous “homophobe.” To push the movie over into the absurd, the conclusion pairs Nina with a very unlikely lover who has some traits that were clearly chosen to further advance the tolerance message. In this movie, everyone is a victim and a hero, everyone has to learn a lesson and everyone finds someone to love if they can just learn to “get along.”

This clear proselytizing and force feeding is further earmarked by a homosexual kiss and an image of the two men in bed. It is as if the filmmakers are trying to condition the American public to not think twice about seeing this type of image on film.

On a final note, it was ironic to see a trailer before THE OBJECT OF MY AFFECTION on the new movie coming this summer starring Harrison Ford and Ellen DeGeneres’s lover, Anne Heche. The movie clearly suggested that the two leads would be romantic. While Heche may be taking Laurence Olivier’s advice and “just try acting” by playing a heterosexual, reports from the real world suggest that Heche is having a wandering eye toward men, and only acts lesbian when DeGeneres is around. Heche did say in interviews that she wasn’t lesbian until she met DeGeneres. What this all means is that it may all come down to mere preference and, when lifestyles aren’t governed by God’s standard, preferences can fall on anyone. Hence, the intention of THE OBJECT OF MY AFFECTION may be lost, making it not only politically correct, but irrelevant and hence doubly invalid.