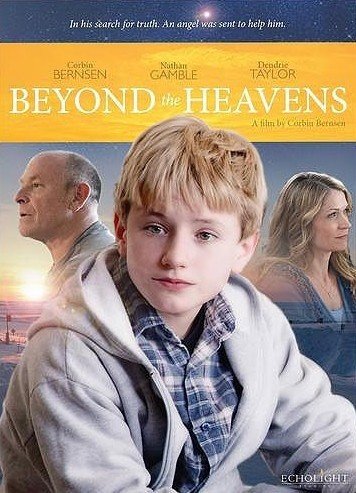 BEYOND THE HEAVENS is about a young boy named Oliver who doubts the existence of God. Oliver lives in a small, wintry, isolated Canadian town. His grandfather just happens to be the local pastor, but Oliver wants to disprove God’s existence. Oliver’s parents aren’t doing well. His brother completely disappeared when he was about Oliver’s age. In the midst of this, there’s the strange character of Barlowe Mann. Barlowe says he came to Earth on a meteor and becomes a Pied Piper to the town’s children. All of the tensions in the town explode when Oliver disappears. The question is, will faith triumph over fear?

BEYOND THE HEAVENS has jeopardy, nuance, good dialogue, and compelling character elements. It could use more action, but it’s intriguing and captivating nonetheless. BEYOND THE HEAVENS asks some very tough questions about faith and suggests that belief in God is reasonable and critical. It’s almost like a Christian episode of Rod Serling’s TWILIGHT ZONE series. The resolution in BEYOND THE HEAVENS is a great evangelistic moment. It comes very close to proving the case for God.

(CCC, BBB, M) Very strong Christian, biblical worldview where a skeptical boy comes to Jesus in the midst of a family hurting for the loss of his brother; no foul language; no violence; no sex; no nudity; no alcohol; no smoking or drugs; and, fear of strangers, hint of kidnapping proven wrong, suggestion of long-term evolution but the teacher also talks about intelligent design and comes to church in the end.

BEYOND THE HEAVENS is an ultimately rewarding, eerie Twilight Zone type science fiction drama focused on a young boy named Oliver who doubts the existence of God.

Oliver’s grandfather is the local pastor. The movie opens with Job 11:7-8:

“Can you fathom the mysteries of God?

“Can you probe the limits of the Almighty?

“They are higher than the heavens above—what can you do?

“They are deeper than the depths below—what can you know?”

Then, several news outlets talk about a meteorite crashes into Western Canada and lighting up the sky. A young boy named Oliver says in voice over that this was a turning pint in his life and the moment when he was transformed. He says he used to go out to look at the stars and wonder at the open space. He gets uncomfortable, however, in church. His grandfather’s preaching has very light hints of hellfire and a lot of discussion of God’s sovereignty. His father, Gus, and his mother, the preacher’s daughter, are enraptured by the sermons. Oliver just wants to escape.

Oliver finds solace in his science class. He wants to do a science experiment proving God doesn’t exist. His teacher says he’ll always have that nagging doubt.

In the midst of this, there’s the strange character of Barlowe Mann, whom the voice over describes as an angel hiding his wings. Barlowe Mann likes to read to the children. He seems almost like an idiot savant. He is a Pied Piper to the children in this small, desolate, wintry Canadian town. At one point, he says he came in the meteor that crashed two years ago.

Oliver’s parents aren’t doing well. His brother disappeared from the face of the Earth when he was about Oliver’s age. His mother looks on Barlowe Mann as a threat, or even worse as a drifter who wants to kidnap her only remaining son. However, Barlowe Mann works for Oliver’s father, Gus, and Gus likes him.

All of the tensions in this tiny town explode when Oliver disappears. The question is, will faith triumph over fear?

Corbin Bernsen does an incredible job of directing ordinary people in extraordinary ways. One would think these actors are professionals. There’s not a moment of the movie that doesn’t have jeopardy, nuance, good dialogue, and compelling character elements.

This movie focuses on the story’s essence, while including the many flavors Corbin has built into it. The movie asks some very tough questions about faith and suggests that belief in God is reasonable and critical. As in all of Corbin’s movies, it isn’t a lecture, it isn’t didactic, and it leaves some loose ends. Rod Serling’s THE TWILIGHT ZONE is probably the best comparison, however.

Even so, the resolution is a great evangelistic moment. Corbin has come close to proving the case for God. One very slight problem is that the Barlow Mann character suggests that Santa Claus is real, which he is if he is referring to St. Nicholas, not the jolly mythic character.

Barlow is an incarnational figure. However, at the same time, he’s a little bit more unsettling and difficult to deal with than the average incarnational allegory, such as THE LION, THE WITCH AND THE WARDROBE.

Barlowe isn’t perfect. He is not a creator. His mental acumen seems strained. By the way, the Santa Claus statements could be taken in a spiritual sense as the Spirit of Christmas.

So, all in all, BEYOND THE HEAVENS is a complex, captivating movie that may help lots of skeptics come to know the truth of God and His creation.