"Being Married Is Best" 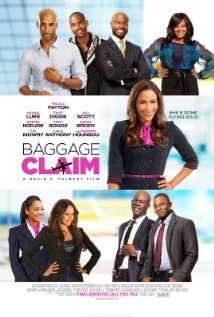 BAGGAGE CLAIM follows the romantic problems of an attractive female fight attendant named Montana. Montana is desperate to find a quality man to bring to her younger sister’s engagement party in 30 days. All her life, she saw her mom setting a bad example with five marriages. Montana has a string of ex boyfriends that are now successful in various fields. With her airport and airline friends around the country, she plans to find out if her best exes are traveling, in hopes of striking a spark with one of them again. She settles on one man, but something doesn’t seem right. Might her answers lie closer than she ever expected?

BAGGAGE CLAIM is a fast paced and frequently funny jet set comedy. Paula Patton is luminous in a breakthrough role worthy of Julia Roberts in her prime. The cast of nearly all African-American actors is a refreshing change of pace. The ending to BAGGAGE CLAIM extols the benefits of marriage and making a lifelong commitment. However, BAGGAGE CLAIM has some off-color moments and foul language. So, MOVIEGUIDE® advises strong caution.

(BB, Ro, Ho, PC, LL, V, S, N, A, M) Strong moral worldview with some strong messages about the benefits of marriage, including female lead’s mother talks about her true love and the value of a good man and marriage and male neighbor friend speaks positively about lifelong marriage, undercut by some Romantic aspects and a positive portrayal of a homosexual character who discusses his romantic life comically a few times, plus politically correct elements where a black Republican is portrayed as unctuous and a sellout; 12 obscenities and profanities; a minute or so of comic violence as a woman yells at, hits and throws things at her boyfriend because he cheated on her plus airport security man forcibly pulls a man out of a security line; some sexual content when female friend and homosexual friend of female protagonist discuss their promiscuous exploits in a comical fashion, kissing, comic reference to condoms, implied fornication, woman’s boyfriend turns out to have a wife, and cheating ex-boyfriend in bathtub tries to lure female lead into tub but she refuses; upper male nudity and two scenes with woman in underwear and bra; alcohol use; no smoking or drugs; and, lead female’s mother is the subject of running gags about the fact she’s been married five times, man has tattoos, and comical tricks and deceit are used to get protagonist through airport security easily to chase down old boyfriends through her job as a flight attendant.

BAGGAGE CLAIM is a highly entertaining if occasionally predictable romantic comedy about a female flight attendant who uses her frequent flier miles and friends in the airline industry to help her find the perfect man in 30 days. It has a strong moral worldview extolling marriage, but the positive message is undercut by some immoral elements.

The story follows the romantic travails of an attractive, sweet airline stewardess named Montana. Montana is desperate to find a quality man to bring to her younger sister’s engagement party in 30 days. All her life, she saw her mom setting a bad example with five marriages, and Montana has a string of ex boyfriends that are now successful in various fields. With her airport and airline friends around the country, she hatches a plan to find out if her best exes are traveling, what their routes are, and to use frequent flier miles and chicanery to wind up on the same flights as those men in hopes of striking a spark with one again.

Thus begins a fast paced and frequently funny jet set comedy in which she finds one disappointment after another with these men. Then, one man offers her a chance to travel the world with him. However, something doesn’t seem right, and Montana finds her real romantic answers might lie closer than she ever expected.

BAGGAGE CLAIM has some risqué humor, mostly in the form of comic banter from Montana’s friends about their flings. One of those friends is a homosexual character. Finally, there are a couple of scenes in which the men comically attempt to seduce her and fail. Montana refuses to have casual sex and ultimately makes some very good choices when her mother surprises her with a beautiful testimony about true love, a quality marriage, and the importance of both in life. The ending extols the benefits of lifelong marriage.

The ending of BAGGAGE CLAIM has its heart in the right place morally, despite the risqué moments and some foul language. Nevertheless, MOVIEGUIDE® advises strong caution.

Paula Patton is luminous in a breakthrough role worthy of Julia Roberts in her prime. The cast of nearly all African-American actors is a refreshing change of pace. They bring a different, yet universal, perspective to this particular chase for true love. Writer/Director David E. Talbert may prove to be a creative force to reckon with in the future.