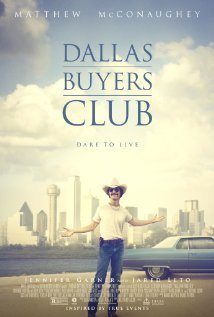 Based on a true story, DALLAS BUYERS CLUB is about a macho cowboy and ladies man in the 1980s who finds his world turned upside down when he gets HIV, the AIDS virus. The movie opens with an emaciated rodeo cowboy, Ron Woodruff, trolling for babes, booze and drugs. Very macho and very anti-homosexual, Ron is blindsided when he’s diagnosed with the AIDS virus and given 30 days to live. His determination to find a way to beat the disease leads to a transformation where Ron become an ardent AIDS activist and pro-homosexual convert.

DALLAS BUYERS CLUB is well acted and sometimes plays like a thriller. However, it’s hard to enjoy it because the language and sexual references are extremely crude, pervasive and annoying. This greatly minimizes the movie’s own left-leaning, pro-homosexual agenda. That said, there’s a positive conservative, libertarian message in DALLAS BUYERS CLUB. It attacks the overbearing, big government policies of the Federal Drug Administration during the first years of the AIDS epidemic. Ultimately, the messages in DALLAS BUYERS CLUB get lost in its abhorrent reliance on abundantly crude content.

(PaPaPa, PCPCPC, HoHoHo, C, B, PP, CapCap, LLL, V, SSS, NN, AA, DDD, MM) Very strong and very lewd politically correct, pro-homosexual worldview with some light Christian/Jewish references to God that don’t really go anywhere (including appeals to God, and man seems to pray in a church), and some moral elements about helping the sick and getting rid of hate which doesn’t go far enough, but there’s a Pro-American, conservative, capitalist or free market message about the tyranny of big government institutions like the Federal Drug Administration or the latest socialist boondoggle from the neo-marxists, Obamacare; at least 186 obscenities, 21 strong profanities, three light profanities, and brief vomiting and urinating; light violence such as bull riding at a rodeo, man attacks doctor he hates, people dying; extreme sexual content and sexual immorality includes crude scenes of depicted fornication, crude dialogue about female body parts, and homosexual, cross-dressing references (including a strong endorsement of homosexual lifestyles and complete acceptance, if not promotion; multiple shots of upper and rear female nudity, rear male nudity, and upper male nudity; alcohol use and abuse; smoking, use of marijuana, multiple scenes of cocaine snorting, illegal and legal drug injections, and multiple references to using drugs to fight AIDS; and, evil overly strict federal government regulations but rebuked, lying to smuggle illegal drugs across the border to help fight AIDS, IRS used for political punishment but rebuked, man uses hospital janitor to steal drug used in fighting AIDS but that’s exposed and it causes him to have a heart attack, some materialistic attitudes.

Based on a true story, DALLAS BUYERS CLUB is about a macho cowboy and ladies man in the 1980s who finds his world turned upside down when he gets HIV, the AIDS virus. DALLAS BUYERS CLUB and its politically correct worldview are filled with lewd, abhorrent behavior and pervasive foul language, but it has an interesting anti-big government subplot showing the real benefits of a free market unhindered by totalitarian federal bureaucracy like Obamacare, aka the deceptively labeled Affordable Care Act.

The movie opens with an emaciated Matthew McConaughey as rodeo cowboy Ron Woodruff, trolling for babes, booze and drugs. Very macho and very anti-homosexual, Ron is blindsided when he’s diagnosed with the AIDS virus and given 30 days to live.

After rejecting the friendship of a transvestite homosexual in the AIDS ward, Ron goes on a crash course of research about the virus. He learns about alternative treatments, especially the use of Anti-AIDS drug cocktails and begins smuggling drugs into the USA.

Ron sets up a thriving drug business in the homosexual AIDS community, but the FDA comes down hard on him. Ron escapes their clutches, only to find them sending the IRS after him. In the meantime, Ron learns how to befriend homosexuals, including the transvestite whose friendship he had spurned.

DALLAS BUYERS CLUB is very well acted and sometimes plays like a thriller. However, it’s really hard to enjoy the movie’s story because the language and the sexual references are extremely crude, pervasive and annoying. This greatly minimizes the strength of the movie’s politically correct, leftist pro-homosexual correct pagan worldview. The extremely crude and lewd content will turn off many viewers the filmmakers may want to reach with their political, social message. (You can always tell that liberal and leftist filmmakers really have an ultimately immoral, evil agenda when they include such strong crude, graphic content in their movies. If they had a really positive agenda – if the Good and the True were indeed their first goal, they wouldn’t include such extremely or pervasively lewd content in their movies. They would try to clean them up.)

All that said, there’s a positive libertarian/conservative subplot in the movie:

The hero tries to fight the overbearing, big government policies of the Federal Drug Administration that refuses to okay the drug cocktails that were clearly saving the lives of thousands of HIV-infected patients in the Eighties. Thus, the movie comes out in support of the free market and limited government.

What many libertarians (and some conservatives) don’t understand, however, is that Anti-Christian social, political views and policies promoting the “Sexual Revolution” and “gay rights,” not to mention the anti-family welfare state, are a major thing that led to the AIDS epidemic among homosexuals and drug addicts in the first place! The worldwide breakdown in Christian and biblical morality, the Family and the Church, including the infiltration of rank heresy in many Christian denominations and Jewish communities, led directly to the AIDS epidemic. Thus, the BEST way to fight AIDS is not to get it in the first place! Of course, this means we must return to the Bible’s definition of faith and morality (and God’s definition of the Family). It also means we must leave behind Atheist, Pagan, Neo-Marxist and Anti-Christian, Anti-Semitic definitions of faith, morality, and family life endorsed by the Supreme Court and other heretics of modern society.