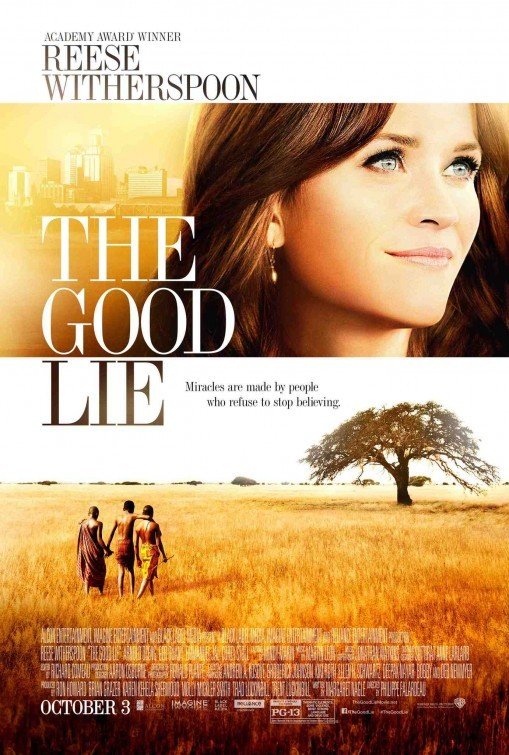 THE GOOD LIE is a powerful drama about Sudanese refugees who make it through some extreme trials and are brought to America to make a new life. A group of children are playing soccer in a village in Sudan, until suddenly some warlords come to the village. The Warlords kill nearly everyone, except several children. Bonding together, the children run away. Walking hundreds of miles, the group reaches a refugee camp. Years later, the group finds out they will be flown to America to make a new life. Arriving in Kansas City, the boys are greeted by Carrie, a young woman who must help the boys find jobs.

THE GOOD LIE has a strong Christian worldview with Scripture, prayer, preaching, and a sacrificial theme. There are some cautionary elements. These include a promiscuous American woman character, and one of the lost boys being enticed by marijuana. Both are rebuked, however. THE GOOD LIE is very well made. It will make viewers laugh and cry. THE GOOD LIE has some heavy moments, but it’s an inspiring story that ultimately uplifts viewers.

(CC, BB, L, VV, S, N, A, DD, M) Strong Christian, biblical worldview, with prayer before meal, Scripture read, Bible stories told, sacrifice, characters carry the Bible hundreds of miles as their only item, preaching, church scene, giving; four obscenities and four light profanities; strong violence includes warlords come into village and shoot people (mostly heard but some shooting seen), multiple people die, children lose their parents, child dies, children fight off tiger, dead people float down a river after gunshots fired, children are shot at and taken; upper male nudity in African villages; implied fornication from character who doesn’t have her life in order and can’t commit to a relationship and some kissing; alcohol use; no smoking, but African character is given marijuana but doesn’t understand and starts using a lot but is rebuked; and, lying.

THE GOOD LIE is a drama about Sudanese refugees who make it through some of the hardest trails and are brought to America to make a new life. THE GOOD LIE has a strong Christian worldview with Scripture, but there are some cautionary elements.

The movie opens with a group of children playing soccer in a village in Sudan. Suddenly, some warlords come into the village. The warlords kill almost everyone, except four boys and a girl, the sister of there of the boys. Bonding together, the children run away from the village. The oldest boy, Theo, is made the chief and must lead the group.

Walking hundreds of miles, the children finally stop in a field and lay down to sleep. One of the boys wakes in the morning and looks up. When he looks up, men with machine guns are walking through. They see him and start shooting. Theo starts yelling and stands up. The evil men take Theo, and the others are saved. The younger boy is now the chief and must lead the pack a few hundred more miles. Finally, the group gets to a refugee camp.

Years pass, and they have now been in the refugee camp for some time, waiting for their name to appear on the list of people to transfer to America. Miraculously, they get on the list. When they arrive in America, the three boys find out their sister can’t come with them. Saddened, they part and are flown to Kansas City, while their sister, Abital, is flown to Boston.

Arriving in Kansas City, the boys are greeted by Carrie, a young woman who doesn’t quite have her life together. Carrie must help the boys find a job. Will the boys be able to find a job, get back together with their sister, and mend their sorrow-filled hearts?

THE GOOD LIE is a powerful movie that will have audiences crying multiple times. The movie is very well down and touching. The acting is actually done by the refugees themselves, but they do a great job. This isn’t Reese Witherspoon’s best acting job, but she does a good enough job. The cinematography is well done, along with the movie’s suspense and dialogue. Finally, although the subject line is very heavy, there is relief from the drama, including some laughter.

THE GOOD LIE has a strong Christian worldview. The refugees travel hundreds of miles with only a Bible, reading scriptures and telling stories from the Bible to keep hope. One of the refugees becomes a pastor later in life, though one of the refugees gets influenced by his coworkers to start smoking marijuana. Also, Reese Witherspoon’s character is a bit edgy and is promiscuously sleeping with men. Eventually, however, the refugees soften her heart. The movie’s title doesn’t depict its values, though it does have some content requiring caution. Overall, THE GOOD LIE has a powerful, inspiring Christian message.