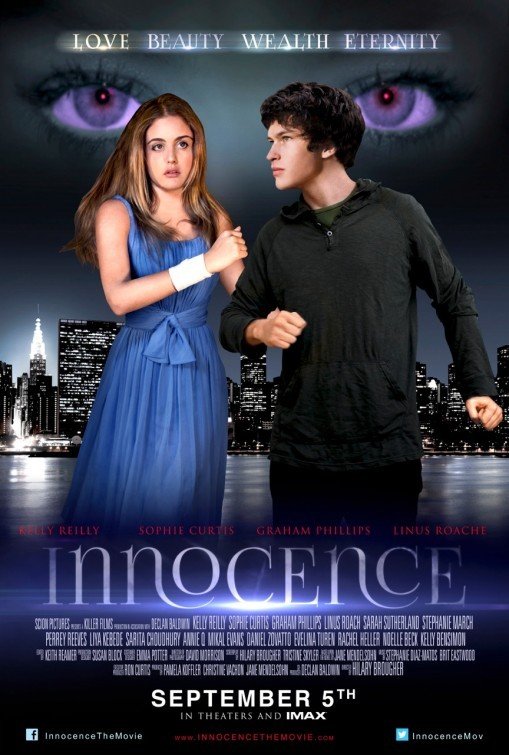 INNOCENCE is a horror movie about a teenage girl at a fancy prep school who uncovers a cult of women who live long lives by drinking the blood of a virgin. After losing her mother in a drowning accident, Beckett moves to Manhattan with her father, a writer. Arriving at her new school, Hamilton, Beckett begins having scary visions of dead girls. The school nurse introduces her to the “book club,” made up of the women running the school. After one student’s suicide, Beckett starts investigating. Her quest for the truth leads her to the book club members and puts her life in danger.

The production quality of INNOCENCE is fair, with more than one twist to keep viewers guessing and an exciting finish. However, the movie’s ending implies that its young heroine has to have sexual relations with her boyfriend to stop the cult. It also implies the evil will continue, despite her success in foiling the evil cult’s plans. Finally, INNOCENCE has an occult worldview and some underage drinking and use of prescription drugs. So, MOVIEGUIDE® finds INNOCENCE ultimately unacceptable.

(OO, B, L, VVV, S, NN, AA, DD, MMM) Strong occult worldview as women seeking long life hold a ceremony where a virgin will be sacrificed so that others can drink her blood and live longer, with light moral elements as intended victim tries to uncover and stop the cult, but a twist at the very end suggests the evil has endured; two obscenities; very strong violence includes girl commits suicide falling from an upper level window to the pavement below, man killed by woman stabbing him in spinal cord, woman slaps woman unconscious, woman slits heroine’s wrist, and visions of dead teenage girls; two implied fornication scenes, woman envisions a flash of demonic woman/image approaching her with a sexual gesture possibly as if trying to give oral sex; upper female nudity in painting; social drinking, teenagers have wild party with alcohol and pills, Ava is alcoholic and drunk at least twice; teenage girls given strong prescription drugs such as sleeping pills and Vicodin; and, heroine decides to stop the cult from sacrificing her for her virgin blood by losing her virginity, lying, betrayal, bad role models, dysfunctional family, kidnapping, heroine sees visions of girls killed in the past, moral relativism, and stealing.

INNOCENCE is a horror movie about a teenage girl at a prep school who uncovers a cult of women who live long lives by drinking the blood of a virgin. INNOCENCE delivers some thrills, but the worldview is occult, and the ending suggests that the evil will endure despite the happy ending.

INNOCENCE opens with a picturesque view of a beach. Young Beckett (Sophie Curtis) and her mother are about to enjoy surfing some waves. Tragically, Beckett’s mother goes under a wave, and it’s assumed she drowned as her empty surfboard floats on the water.

Four months later, Beckett and her father Miles (Linus Roache) relocate to Manhattan for a fresh start. Miles plans to further his writing career as a successful writer, and Beckett will attend Hamilton, a prestigious prep school. Once at Hamilton, she meets the school nurse, Pamela, who dotes on her and initially seems full of compassion and empathy for Beckett and her loss.

Beckett begins to see horrific images such as dead girls flash before her eyes once she comes to Hamilton. She’s initially very frightened by this and has trouble sleeping. On her very first day, Pamela introduces her to the “book club.” which is largely made up of the women that run the school. There’s an ominous aura surrounding them, despite them all appearing to be polite, cultured and kind. Soon, Pamela is ingratiating herself comfortable with both Beckett and her father. She becomes romantically and sexually involved with Miles rather quickly, and Miles often leans on Pamela for her quiet strength and wisdom as he feels Beckett growing distant.

However, Beckett has begun not to trust Pamela. Beckett and Toby (Graham Phillips), the son of a school board member named Natalie (Stephanie March), fall in love. Natalie and Pamela do what they can to keep the two from getting intimately involved with each other.

After the suicide of one of the other female students, Beckett starts looking for answers for this occurrence and the deaths of two other girls many years ago. Beckett suspects that these women are actually the same women who founded the school in 1912, but they’ve found a “fountain of youth” so to speak by drinking the blood of a virgin. Beckett’s quest for the truth puts her in even more danger as she’s kidnapped by the women of the school board and is scheduled to be the next Hamilton girl to lose her life to preserve the women’s lives, including Pamela’s.

During the sacrificial ceremony in the Hamilton garden, Pamela cuts Beckett’s wrist and drops her blood into a chalice to drink as the others offer occult and demonic incantations. When Pamela begins to drink the blood, she spews it out of her mouth knowing it is tainted. Prior to Beckett’s capture, it’s implied that she had sex with Toby. Toby tries to come to her rescue and is accosted by a being in a black cloak that looks like a not-so-human man. Perhaps, it’s supposed to be the devil incarnate. Pamela forces Beckett to drink from the cup and Beckett sips and spews it out into Pamela’s face. She struggles to get Pamela’s dagger and then stabs Pamela. Immediately she and the other woman crumble away into dust. Beckett and Toby flee from the garden alive and free, but as they embrace, something about Beckett is different. She has the same misty blue glint in her eye that Pamela once had.

The production quality of INNOCENCE is fair, with more than one twist to keep viewers guessing and an exciting finish. However, the movie’s ending implies that its young heroine has to have sexual relations with her boyfriend in order to stop the cult. It also implies the evil will continue, despite the heroine’s success in foiling the evil cult’s plans. Finally, INNOCENCE has an occult worldview and some underage drinking and use of prescription drugs. So, MOVIEGUIDE® finds INNOCENCE ultimately unacceptable.

INNOCENCE is abhorrent due to violence and adult, and occult themes. It was disappointing to see a movie with such a promising beginning go downhill in acceptability. The notion of Beckett as a young female virgin would have to choose to lose her innocence to save her life by having sex with Toby sends a poor message to the teenagers that undoubtedly will be intrigued by INNOCENCE. The worldview is strongly occult as the satanic practices of the Hamilton women are displayed. There is a light moral/biblical counter-worldview as Beckett tries to protect her friend and stand against the cult. Regrettably, the story points to part of the solution being for Beckett to give up her virginity, which she willfully does with Toby.