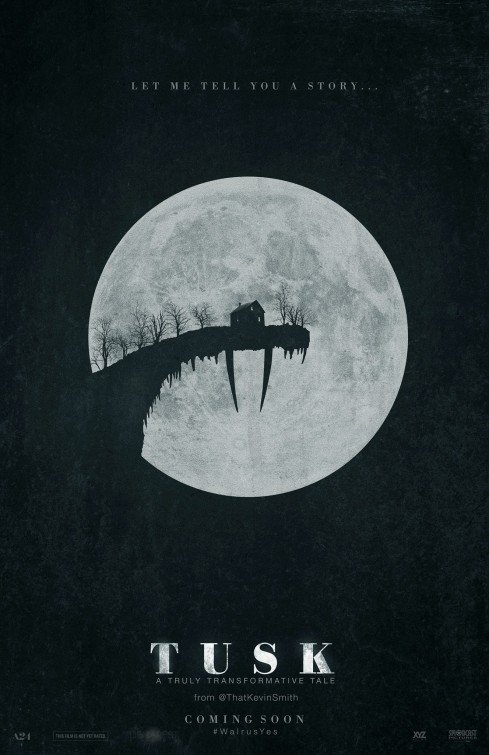 TUSK is a strange, quirky horror movie from iconoclastic filmmaker Kevin Smith. Wallace, an obnoxious, brash American podcaster, travels to Canada to interview a nerdy accident victim. However, he finds the victim has committed suicide. So, he decides to interview Howard, an old sailor with an incredible past in an isolated mansion up north. Howard knocks Wallace out and starts to mutilate his body to turn him into a walrus. Before Howard cuts out his tongue, Wallace manages to leave an urgent phone message with his podcast partner and his girlfriend. They hire a goofy French Canadian detective, played by an incognito Johnny Depp, to help them save Wallace.

TUSK is definitely bizarre, quirky and sometimes funny. Surprisingly, the movie’s tragic ending is rather touching. TUSK could have been much more bloody and violent than it is. That said, it’s still pretty gruesome and disturbing in parts, despite some literate dialogue and good storytelling. TUSK also contains an excessive amount of strong foul language. In addition, it has some explicit lewd content. So, TUSK is another movie media-wise viewers probably should avoid.

(B, PaPa, LLL, VVV, SS, N, M) Light moral worldview in a tragic horror movie setting about a serial killer who mutilates his victims, and he and the protagonist’s selfish pagan ways are rebuked; at least 98 obscenities (including many “f” words), seven strong profanities, and 10 light profanities; very strong violence includes young man hacks off his leg accidentally with a samurai sword, off screen suicide, man drugged and falls out of chair, man wakes up to find right leg amputated, man stands next to bloody operating tables and appears to be mutilating man’s body, man wakes up to find he now has tusks like a walrus and his tongue is cut off and his body has been changed to look like a walrus with bloody stitches on his skin, it’s implied a man is stabbed repeatedly to death with two pieces of sharp bone but penetration is not shown, fighting, people holding guns enter serial killer’s fancy cabin, and image of a man eating walrus blubber with dead walrus carcass next to him with big gash in it; strong sexual innuendo includes man’s radio partner is cheating on him with his girlfriend, implied fornication during lengthy bedroom scene, and discussion about male walrus private parts; upper and rear male nudity; no alcohol use; no smoking or drugs; and, man held against his will and villain lies to policeman.

TUSK is a strange, quirky horror movie from iconoclastic filmmaker Kevin Smith, with a surprisingly emotional ending. TUSK is not as violent, gory, graphic, or abhorrent as it could have been, but the sum total of its parts add up to a piece of entertainment that media-wise viewers still will want to avoid.

The movie is about Wallace, a selfish co-host of a comedy video podcast that makes fun of people and other things in the popular culture. His girlfriend, Ally, tells him he’s changed since the podcast became popular, and not for the better. She’s especially upset that he enjoys making fun of people in cruel ways. Indeed, Wallace and his co-host, Teddy, make jokes about a Canadian nerd who accidentally cut off his leg while playing with a samurai sword. Wallace also confides to Teddy that he likes to fool around with the cute female groupies who follow him around whenever he makes public appearances.

Wallace is scheduled to interview the young Canadian man who accidentally cut of his right leg. Ally begs him not to go, because she has a bad feeling about the trip.

Of course, Wallace ignores her concerns. He just wants to get into her pants the night before he has to leave for Canada.

Wallace travels to Canada, only to find out that the Canadian nerd has committed suicide. Being the selfish kind of guy he’s become, Wallace is more upset about losing an interview for his show than he is about the man’s death. He goes to a bar to drink his troubles away. However, in the restroom, he finds a note on the community bulletin board written by a former sailor who says he has lots of adventures he wants to tell, along with a room to rent.

The note is so eloquent and interesting that Wallace jumps at the chance to interview the man, who calls himself Howard Howe. Howard invites Wallace to come up to his house, which just happens to be located in an isolated rural area two hours north.

Sure enough, Howard turns out to be an eloquent elderly man with some wild stories to tell. One of the stories involves how Howard was stranded on an Arctic island with a friendly walrus who rescued him from a shipwreck. Howard continues to speak of his adventures during dinner, but Wallace suddenly gets very tired and passes out.

The next morning, Wallace wakes up to find out that his right leg has been amputated. Howard tells Wallace some story about being bitten by a very poisonous spider, but Wallace isn’t buying it. Howard also talks about a mysterious doctor coming to the house and having to amputate the leg.

Wallace manages to leave urgent messages on Ally and Teddy’s cell phones. It turns out that Ally and Teddy are sleeping together behind Wallace’s back.

Howard ties Wallace down on a bloody makeshift operating table. As he recounts a tale about his parents’ death and the abuse he suffered in an insane asylum, Howard mangles Wallace’s body and apparently tears out his tongue. He’s also fashioned Walrus-looking tusks from his amputated shin bones.

Meanwhile, Ally and Teddy finally hear Wallace’s please for help. They rush to Canada, where they enlist the help of a weird French Canadian detective, Guy, played incognito by Johnny Depp. Guy has been tracking Howard for years, finding several mangled bodies along the way.

Filmmaker Kevin Smith developed this story from an eloquent fake ad on Craigslist about a man who wanted someone to dress up in a walrus suit and make walrus noises. On his own podcast, Kevin and his co-host Scott Moser started discussing the ad and imagined its potential as a horror movie. They took a poll among their listeners, who encouraged Kevin to make the movie himself. So, the story for TUSK was born.

TUSK is definitely bizarre, quirky and sometimes funny. The creation of the goofy French Canadian detective is especially clever and funny. Surprisingly, the ending is rather touching, as both Ally and Wallace (who’s indeed been transformed into a half walrus and half human) mourn the loss of his humanity. Of course, Wallace’s transformation into something less than human began before the movie’s incidents, when Wallace let his podcast fame go to his head. In that respect, TUSK takes advantage of classic horror movie tropes in such movies as THE WOLFMAN, where a person is transformed into some kind of half-human, half-animal monster. Universal’s original WOLFMAN movie with Lon Chaney, Jr. and Claude Rains is a tragedy, and so is TUSK.

TUSK could have been much more bloody and violent than it is. For example, when the villain gets his violent comeuppance at the end, the movie implies his violent ending rather than shows it. That said, it’s still pretty gruesome and disturbing in parts, despite some literate dialogue and good storytelling. TUSK also contains an excessive amount of strong foul language. In addition, it has some explicit lewd content. So, all in all, TUSK is another movie media-wise viewers probably should avoid.