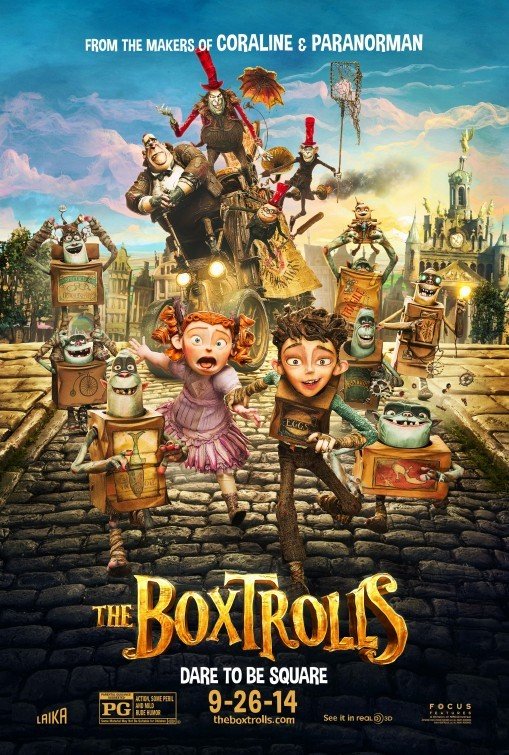 THE BOXTROLLS is an animated feature about an orphaned boy, a girl, some misunderstood monsters, an “exterminator,” and some pompous cheese aficionados. The boxtrolls are some ugly underground cave-dwellers who come out at night, scavenge the city’s trash, and build wonderful things in their cave under Cheesebridge. Through some amazing circumstances, a baby boy ends up living with them and being lovingly raised by one boxtroll. Meanwhile, an evil “exterminator” is trying to capture the boxtrolls to advance up the social ladder. The boy, now older, teams up with the mayor’s daughter to save the boxtrolls.

THE BOXTROLLS is a delight. It’s funny, clever, exciting, and sometimes even profound. It also has a strong moral worldview teaching several positive lessons, such as do the right thing and judge people by their “gentle and quiet spirit,” not their outer appearance, as First Peter tells us to do. There’s even some funny but deep discussion of good versus evil in the dialogue. However, THE BOXTROLLS contains some slightly edgy content, such as an apparent murder and a preoccupied father. So, light caution is advised.

(BBB, C, L, V, S, N, A, M) Very strong moral, redemptive worldview about doing the right thing and risking life and limb for your friends, with a philosophical discourse on the qualities and nuances of good versus evil in a funny, clever and ultimately profound way, plus villain dresses up incognito as a woman and attracts the attentions of the men in a town; a “Dear Lord,” “Lord” and OMG light exclamatory profanity, plus villain is allergic to cheese and his face breaks out in great ugly bulges, proving that he is the true monster; cartoon violence includes hitting, threats of hitting, boy climbs to heights to free friends, villains chase creatures and children, some fighting, scary machine belches and smokes, tales of creatures eating children turn out not to be true, and an far-away image of a yellow cloud of smoke implies man allergic to cheese ate too much and exploded; no sex or bedroom scenes but married man is attracted to a fancy dressing woman in town who turns out to be a man in disguise; rear male nudity of creatures in one scene and baby in another; implied wine use; no smoking or drugs; and, an alleged kidnapping, but it turns out not to be a kidnapping at all, lying but rebuked, deceit but rebuked, false imprisonment but rebuked, father is too busy and preoccupied with his own interests to pay attention to his daughter, but this changes, villain dresses up incognito as a woman to demonize creatures and attracts the attentions of the men in a town, when one man finds out woman was really a man he says “I’m so ashamed.”

THE BOXTROLLS is a quirky and slightly edgy, but loveable and highly entertaining, animated feature about an orphaned boy, a girl, some misunderstood monsters, an “exterminator,” and some pompous cheese aficionados.

The movie begins with the alleged theft of a baby by the boxtrolls, a group of ugly underground cave-dwellers who come out at night, scavenge the city’s trash and build wonderful things below the city of Cheesebridge. One of the town’s residents, Archibald Snatcher, believes the boxtrolls ate the baby. He asks the town’s de facto mayor, Lord Portley-Rind, if he can capture and “exterminate” the troublesome creatures. If he eliminates them all, Snatcher wants to be accepted into the “white hat” community of town leaders. Portley-Rind is more interested in sampling fine cheeses with his fellow highfaluting friends, but he reluctantly agrees.

Meanwhile, under the city, one of the boxtrolls, who’s called Fish because he wears a box with a fish picture on it, lovingly raises the child as if he were his own. Fish gives the child a box with a picture of eggs on it, so the child’s name becomes Eggs.

Years pass, and the number of boxtrolls slowly diminishes one by one, with Snatcher continuing his rounds as the town’s boxtroll exterminator. Snatcher has three plodding accomplices, Mr. Trout (the big and philosophical-minded henchman), Mr. Pickles (the awkward henchman and philosophical-minded) and Mr. Gristle, (the mean one). As Mr. Trout and Mr. Pickles ponder the nuances of good versus evil, Mr. Gristle enjoys his work a little too much. To foment hatred and fear of other boxtrolls, Mr. Snatcher dresses up as Madame Frou Frou, who tells stories about the night that the boxtrolls kidnapped and ate the Trubshaw baby.

Since there are fewer boxtrolls to catch, it’s getting more and more dangerous for Fish and Eggs to roam the city streets at night, picking up food, trash and other interesting things. One night, Lord Portley-Rind’s feisty 11-year-old daughter, Winnie, sees Eggs out on the street. She figures out that Eggs is the long-lost Trubshaw baby and realizes that the stories about the boxtrolls are false. She tries to tell her father, but he won’t listen to her.

Eventually, Winnie and Eggs become friends. When Mr. Snatcher captures Fish, they follow Snatcher and his henchman. They discover that Snatcher isn’t exterminating the boxtrolls at all. Instead, he’s forcing them to work on a special project for another dastardly, albeit unknown, scheme.

This leads to a madcap adventure where Eggs finally learns about his own surprising origins.

THE BOXTROLLS is a delight. It’s funny, clever, exciting, and sometimes even profound. It’s certainly the best movie, and the only really family-friendly one, yet made by the Oregon animation studio LAIKA, which also made CORALINE and PARANORMAN.

THE BOXTROLLS has a strong moral worldview that teaches doing the right thing. In fact, there’s a running commentary between Mr. Trout and Mr. Pickles about the benefits of doing good and making right and wise decisions about good versus evil. Also, although Winnie’s father is too preoccupied with other things, he eventually recognizes how important Winnie is to him. In addition, Eggs has a positive, loving relationship with his adoptive father, Fish, and finds his own father, who, as it turns out, wasn’t dead as everyone supposed but very much alive.

So, besides teaching do the right thing, THE BOXTROLLS also teaches the value of a positive father-child relationship and the notion that you can’t judge a book by its cover. This last message fits with what the Bible says in 1 Samuel 16:7 – “Man looks at the outward appearance, but the Lord looks at the heart.” As 1 Peter 3:3,4 says, “Your beauty should not come from outward adornment, such as elaborate hairstyles and the wearing of gold jewelry or fine clothes. Rather, it should be that of your inner self, the unfading beauty of a gentle and quiet spirit, which is of great worth in God’s sight.” Thus, in the ultimate scheme of things, it doesn’t really matter if you wear a nice white hat. It’s not a bad thing to wear a nice white hat, but what matters most is if you seek first the righteousness of God – His Grace, Mercy, Justice, Goodness, and Love (Jesus, in Matthew 6:33).

THE BOXTROLLS is a bit quirky and slightly edgy. For example, there’s the lie about the boxtrolls eating children. Also, one character seems to be murdered off screen, but they turn up alive. In addition, though he comes around in the end, Winnie’s father is arrogant and detached from his daughter. Furthermore, despite being married, he, like the other men of Cheesebridge, is attracted to Madame Frou Frou. When she’s exposed as a man in disguise, he says, “I feel so ashamed.” Thus, some moments in THE BOXTROLLS seem to have a non-traditional, slightly edgy spin. There are also three light exclamatory profanities. Therefore, some light caution is advised, especially for younger children.

Otherwise, older children and adults who want to see something a little more quirky and unique may love spending some quality time with THE BOXTROLLS.