"Put Your Faith in Jesus, Not Man" 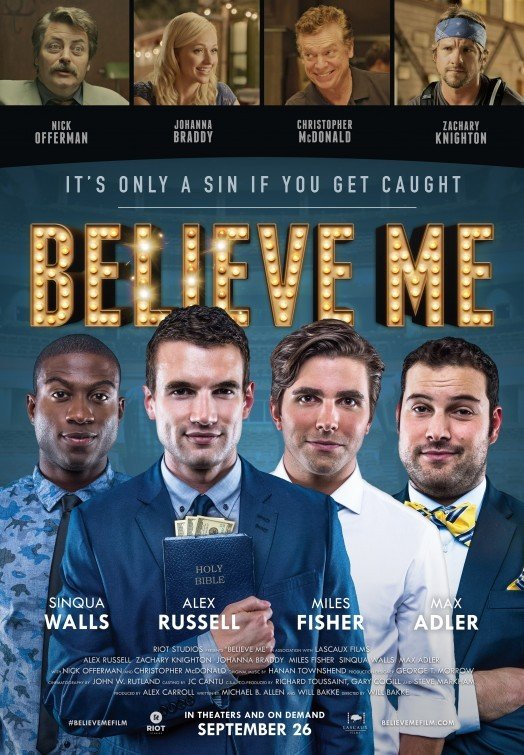 BELIEVE ME is a hilarious, highly provocative, comedy challenging Christians and unbelievers. The plot revolves around Sam, a college student enjoying life as a fraternity hotshot. Sam finds out he owes $9,000 in student fees. To earn quick cash, he comes up with an idea to start a fake charity where Christians will send money. He and three fraternity buddies learn how to dress, talk and act like Christians to raise the money. The deeper they go, however, the more sticky their situation becomes.

BELIEVE ME is a tightly written and directed comedy with many laughs. The entire cast is fantastic portraying good-natured caricatures of the 21st Century American Christian, including an appearance by Christian music artist Lecrae. While BELIEVE ME has plenty of self-deprecating humor, it never mocks the Christian message itself. It only reveals some of the distractions and activities that draw people’s focus away from Jesus Christ. BELIEVE ME ultimately reminds viewers they should put their faith in Jesus, not in people or things. BELIEVE ME does have some foul language and crude jokes, however, so strong caution is advised.

(CCC, BBB, Cap, LL, V, S, AA, DD, M, N) Very strong Christian worldview upholding Jesus as the only way, the importance of integrity, honesty, compassion, service, and also reveals the behavioral practices in some churches that might distract from Christ, including positive sincere portrayals of prayer and worship as well as some that is performed by hypocritical Christians, which is rebuked, and some pro-capitalist content where young man creates an apparel company that allows character to give money for a missions trip and a not so bright man creates a Christian apparel company called “Cross Dressing”, but he doesn’t understand the double meaning of the name; 11 obscenities (including four “s” words, a couple “h” words and an a**), several euphemisms used such as BA, A-hole and a T-shirt says “F-Satan,” which are placed in a comical context that makes an important point about the use of language, and man urinates in urinal; light violence includes a man gets punched and a phone is violently broken; no sex scenes, but sex is referenced several times, sometimes vaguely; upper male nudity; fraternity characters drink heavily, by the end, but this is seen as somewhat pathetic; some references to drugs and smoking; and, plenty of greed, lying, blackmail, stealing, and deceit, though all rebuked.

BELIEVE ME is a hilarious, yet highly provocative, comedy challenging Christians and unbelievers alike, centered around an intelligent student enjoying college life as a fraternity hot shot.

With plans to go to law school after graduation, Sam finds himself in a predicament. He’s been told his scholarship expired the semester before, so now he must pay the university $9,000 in a few weeks. Otherwise, he’ll have to take a break from school to work for the money.

Not wanting to lose any time or momentum, Sam tries to think of a way to get the money in a short amount of time. An idea inspires him when he sees a young woman raise a bunch of money at a church to send her on a missions trip.

Convinced that Christians only give money away to make themselves feel better, Sam decides he can get easy money from churches if he creates a fake charity. Sam recruits his fraternity friends, the smooth talking Pierce, Baker, a party loving goofball, and Tyler, the more ethically concerned team member who’s just along for the fun of it.

The team calls their charity “Get Well Soon.” With the help of the fraternity recruitments, they get the word out about their fundraising event. Not quite successful enough donation wise, the event impresses Ken, the executive director of a touring ministry called Cross Country. He offers the four guys an opportunity to tour with them to fundraise their “mission.” Ken projects they could raise $250,000. Realizing the potential score they have in front of them, Sam, Pierce and Baker agree to preach on the tour while Tyler reluctantly agrees to do the tech work.

Nicknamed “The God Squad,” the guys realize they’re in way over their heads. If they’re going to convince Christians they’re legit, they’ll have to know how to look, talk and act like a Christian. This leads into a hilarious montage of the guys learning prayer etiquette, different ways of raising your hand during worship services, and various kinds of Christian lingo. During the tour, Sam starts to grow close to Callie, a Cross Country team member who’s passionate about missions.

However, the deeper the young men get into their lies, the more troubled some of them get about their deception. Will they get caught before things go too far?

BELIEVE ME is a tightly written, well-directed comedy with a plethora of laughs. The entire cast is fantastic in their roles as good-natured caricatures of the 21st Century American Christian. Nick Offerman and Christian rapper Lecrae also play small roles, giving the movie additional legitimacy. The movie’s greatest strength is the conversation it naturally sparks and the climax that’s resolved through a cleverly written subtext that’s ultimately Christ-centered.

Made by young Christian men, the movie doesn’t cruelly mock American churches, but the Christian subculture definitely receives plenty of jabs. Sam convinces himself he’s actually doing people a service, because by giving these Christians something to believe, he’s actually giving them hope, even if he is a fraud. (MINOR SPOILER) When Sam’s lie is revealed, and he’s confronted by Callie, he defends his lie by pointing out that a lot of people will lose their faith if he’s revealed as a fraud. Callie profoundly states that, if anyone put their faith in Sam in the first place, they SHOULD walk away. Hope isn’t something that should be found in movements, causes or people. Callie rightly says, “If your hope is not in Jesus, than maybe you are hopeless.”

While BELIEVE ME has plenty of self-deprecating humor, it never mocks the Christian message. It only reveals some of the behavioral distractions or practices in churches that draw focus away from Christ. Some of these distractions may be goofy Christian merchandising, Christian lingo that alienates outsiders, or just typical American Christian practices that aren’t necessarily found in the Bible (though none of them may be fundamentally wrong).

What’s interesting is that the main characters (the unbelieving fraternity friends) are the ones with the character arc (primarily Sam). Even though Christians are the ones that are joked about, in the end, Sam is the one who changes and who sees how wrong he was. Additionally, the most sincere person in the movie is the Callie, the Christian girl who has the most profound and positive statements in the movie. While one Christian character is seen as a hypocrite, others are ignorant, all are well meaning people, and Callie is both intelligent and compassionate. There was a good balance of telling the church in a humorous way not get caught up in following people, but to keep your eyes on Jesus.

The movie also points out the need to provide better financial accountability in many charities. In fact, the final scene reminds Christians that giving money away is not the same as fully giving your life to Christ. Also, the movie challenges unbelievers to believe in something more. By the end, the “God Squad” team starts to realize how empty their fraternity life truly was.

In conclusion, BELIEVE ME is a rare comedy treat that entertains viewers unequivocally and also challenges them spiritually. It’s not a movie for everyone and could have been more widely accepted in Christian audiences had there not been some foul language and crude jokes, including four “s” words. Because of that content, MOVIEGUIDE® advises strong caution for older children, teenagers and adults.

Writer: Will Bakke, Michael B. Allen