THE HERO OF COLOR CITY 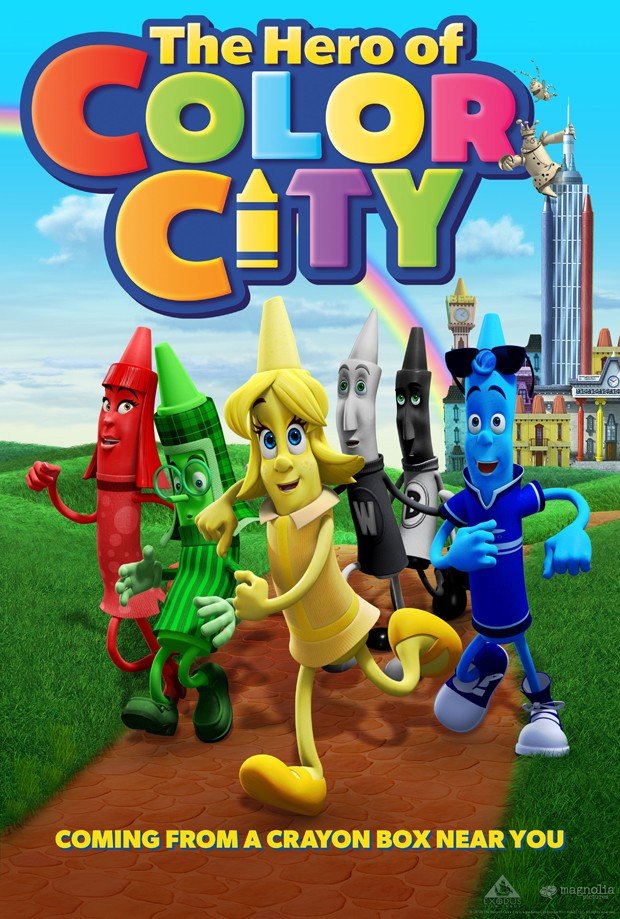 THE HERO OF COLOR CITY is a fun feature-length cartoon the whole family can enjoy. A little boy has sketched a drawing of a king and his friend, a flying thing. When he’s asleep, all his crayons come alive and hop into the crayon box to have fun in Color City. However, the king and his friend go there too and dam up the colors in the rainbow waterfall that gives all the crayons their color. Several crayons volunteer to stop them. They must rely on their friend Yellow to find the courage to fix everything. The problem is, Yellow’s afraid of her own shadow.

(BBB, C, Ro, V, M) Very strong moral worldview promoting courage, helping others, hospitality, understanding, and wisdom, with some redemptive moments promoting forgiveness, plus brief Romantic moment advocating believing in yourself; no foul language; light violence includes large king grabs living yellow crayon and takes her to the top of a tall building in Color City, some falling and characters get scared, but nothing too intense; no sex; no nudity; no alcohol use; no smoking or drugs; and, characters are mean and lack of understanding creates inhospitality, but it’s all rebuked.

THE HERO OF COLOR CITY is a fun feature-length cartoon the whole family can enjoy. It also has some positive messages parents can discuss with their children.

The story opens with little Ben finishing up a sketch drawing of a king and his friend, a “flying thing.” Ben’s mother comes in and puts him to bed.

As Ben drifts off to sleep, the yellow crayon dangling from his fingers drops to the floor and turns into a yellow crayon with a face, arms and legs. Yellow rolls under Ben’s bed and gets scared of the monkey sock puppet lying lifelessly in shadow.

Eventually, King Scrawl, who has no mouth and can only make growling sounds, and Gnat follow Yellow to Color City. King Scrawl chases Yellow, grabs her and takes her to the top of the tallest building in town. The other crayons help her, however, and King Scrawl and Gnat escape to the mountain where a huge rainbow colors the waterfall that gives color to all the crayons.

King Scrawl and Gnat decide to dam the waterfall so that the crayons will have to come to the mountain and color them. Several crayons volunteer to stop them, including Blue, Green, Black, White, and Red. Yellow accidentally tags along. The situation is dire, because damming up the colors in the waterfall will make all the crayons fade into oblivion. Will Yellow be able to get the courage and wisdom she needs to help her friends and stop the king and his talkative helper?

THE HERO OF COLOR CITY misses some plot points in the beginning, but gathers enough steam to deliver an entertaining second half. There are several songs with a couple catchy but brief melodies. A couple moments in the editing could be tightened up, but, overall, the story has a nice pace up through the end.

Watch THE HERO OF COLOR CITY: