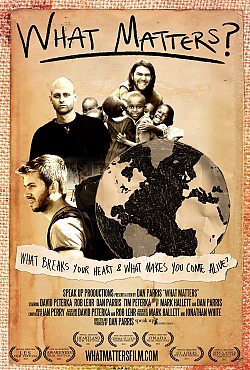 WHAT MATTERS? is a documentary with unexpected twists that inspires believers and unbelievers to take action helping people trapped in poverty. Three young men (two Christians and one atheist) set out to make a documentary about poverty. More than one billion people live on $1.25 a day, so the three friends decide they’ll need to do the same if they want to truly immerse themselves in the issue. Hitchhiking across eastern America, Europe and finally Africa, they interview experts and experience firsthand what poverty feels like. However, a tragic plane crash in Africa involving two of the men puts a monkey wrench into their filmmaking journey.

WHAT MATTERS? is a remarkable story that’s sure to inspire many people. Though it loses some steam at the end, the moment revolving around the plane crash is emotionally gut wrenching. The two Christian men openly share their faith with their atheist friend. The movie is also in favor of capitalist solutions for poverty, including charitable giving. WHAT MATTERS? is a positive, inspiring, captivating documentary, but caution is advised for some obscenities and disturbing images.

(CCC, BBB, CapCap, H, LL, VV, S, D) Strong Christian, Biblical worldview from primary documentarian, with multiple positive references to Jesus, prayer and a few African church services are shown, and capitalistic solutions to poverty are promoted, including charitable giving, even though an atheist friend accompanies the two Christians on a journey to America, Europe and Africa; 11 obscenities, one light profanity, a few other bleeped words, and some light colorful humor; a plane crash kills two men and injures two others, videos of their bloodied faces are shown and stories of their difficult recoveries are told, plus some disturbing images of extreme poverty are shown; some sexual references, e.g., Christian man mentions he’s a virgin, and woman discusses how sexually transmitted diseases are spreading; upper male nudity and naked children; no alcohol use; smoking of cigarettes and one place is called a common drug hangout; and, nothing else objectionable.

WHAT MATTERS? is a documentary with unexpected twists that inspires believers and unbelievers to take action concerning poverty.

Three young men, Dan, Rob and David, set out to understand what it truly means to live in poverty. Over one billion people live on only $1.25 a day, so the three guys decide that, if they truly want to immerse themselves in poverty, they’ll need to do the same. Hitchhiking their way to New York, sleeping in abandoned buildings and eating the little food they can afford on $1.25 a day, it becomes apparent that their journey may be more difficult than they anticipated.

The three friends then visit Europe in order to conduct interviews of professors and poverty activists to discuss the effects that global poverty has. Dan, the filmmaker who spawned the trip, is a Christian, along with David. Motivated through ideals rooted in the Bible, God’s Word written, Dan and David push through the struggles with a little more ease than Rob, an atheist who’s mostly involved to test his own views.

Moving from Europe to Africa, the team visits some of the most poverty stricken cities in the world. Even with rampant sickness, difficult living conditions and scarce food, many of the poorest of the poor exhibit joy and happiness in spite of their circumstances. One day while taking aerial footage from a plane with two other missionaries, a freak accident causes the plane to crash with Rob and Dan inside. Barely making it out alive, Dan and Rob are rushed to the hospital. Tragically, the other two missionaries die.

The plane crash outs a major monkey wrench into their filmmaking plans. Dan and Rob are sent home to recover from the crash, while David continues the journey through Africa. Dan faces many medical problems resulting from the crash, and Rob suffers from PTSD, so their personal convictions are tested even more. Meanwhile, David begins learning what we can do to help those in need in Africa.

WHAT MATTERS? is a remarkable story that is sure to inspire many people. Though it loses some steam at the end, the moment revolving around the plane crash is emotionally gut wrenching. Though not overtly about Christianity, the two Christian guys are clearly guided and encouraged by their Christian faith. They openly share their faith with their atheist friend. They also visit a few African churches, and Jesus is positively mentioned multiple times. The movie is also in favor of capitalist solutions for poverty, which includes charitable giving. As one homeless man quotes in the movie, “Give a man a fish, feed him for a day. Teach the man how to fish, feed him for a lifetime.”

Overall, WHAT MATTERS? is a positive, inspiring, captivating documentary, but light caution is advised for older children due to some obscenities, the plane crash and disturbing images of poverty.

WHAT MATTERS? can be rented or purchased here.