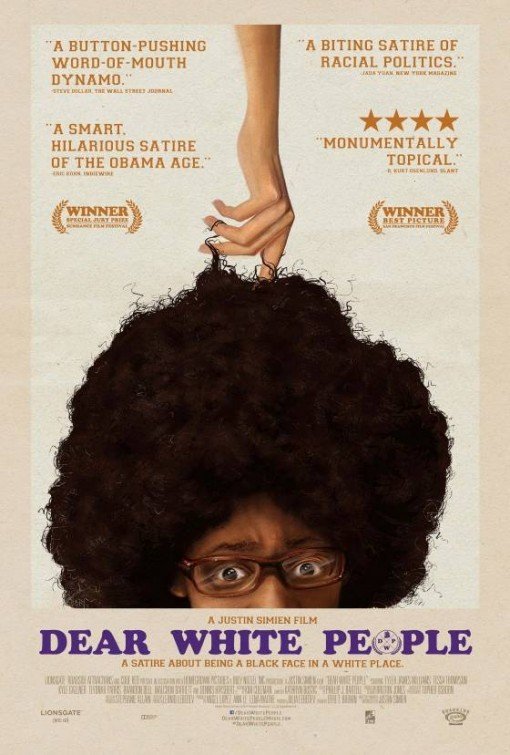 DEAR WHITE PEOPLE is a satire focusing on four African-American students attending an Ivy League college. One student is a militant black woman confronting white people and the university administration. Another is a nerdy homosexual student who finds himself out of his depth when writing for the student newspaper. The third student is the university dean’s son who gets involved with the college’s humor magazine. The fourth student tries to use a racial controversy on campus to start her Reality TV career.

DEAR WHITE PEOPLE has some positive insights about racial issues. Also, the performances and cinematography are well done. However, the narrative structure and the movie’s overall worldview aren’t so wonderful. For example, the story seems to jump all over the place. Also, although the movie takes some shots at a few liberal canards, it still has a strong politically correct, liberal worldview overall. This is especially true in its depiction of the homosexual student. DEAR WHITE PEOPLE has lots of strong foul language, some sexual immorality and substance abuse. Therefore, DEAR WHITE PEOPLE has an unacceptable combination of bad content.

(RoRo, PCPC, HoHo, B, C, LLL, SS, NN, VV, AAA, DD, MMM) Strong Romantic, politically correct, pro-homosexual, liberal worldview mitigated by some moral redemptive elements and positive insights on racial issues and some of the honest confusion that the political atmosphere in America has created; at least 35 obscenities (including “f” words) and some racial slurs; one huge violent scene at the end contains physical altercations between individuals; strong sexual immorality includes homosexual kissing and a couple of scenes of implied fornication, plus some sexual language; brief rear female nudity and upper male nudity; heavy alcohol use, with a huge party scene at the end of the movie that displays individuals drinking and getting drunk; a couple of scenes where individuals smoke marijuana; and, very strong miscellaneous immorality includes several scenes of racism, individuals avenging racism, and individuals basing their immoral behavior and decisions on liberal moral relativism.

DEAR WHITE PEOPLE, a satirical comedy, tells the narrative of four African-American students attending an Ivy League college, Winchester University, in the United States. The movie has some positive insights about current racial issues, including the idea that Americans today are overly sensitive and confused about how society views racial issues, but the movie’s worldview is still rather politically correct, with lots of strong foul language and other crude content.

The unforeseen election of Samantha White, a militant, Black Panther-like activist, as head of a traditionally black residence hall, Armstrong Parker House, initiates a culture war at the university that challenges traditional concepts of the meaning of being black. Samantha is famous for being the host of the confrontational radio show, “Dear White People.” She opposes the university’s move to “diversify” the black residence hall.

Troy Fairbanks, the former head of the house and son of the university’s dean, disobeys his father’s supercilious expectations by trying to become a staff member of Pastiche, the university’s significant humor magazine. Meanwhile, the “all-white student” newspaper recruits Lionel Higgins, an African-American geek who struggles with his sexuality to write about black culture, of which he hardly knows anything. Finally, Coco Conners, the aggressively assimilated pretty black girl, tries to use the racial controversy on campus to start up her reality television career.

No student, especially black students, at Winchester University is ready for Pastiche’s racially ignorant and intolerant annual Halloween party. The party’s controversial theme is “unleash your inner Negro” theme, adding fuel to the increasing fire of racial hostility. When the party erupts into utter chaos and a dangerous riot, everyone must choose a side.

DEAR WHITE PEOPLE has some positive insights about racial issues. For instance, it shows the confusion that all the different categories and stereotypes from both the left and the right have created. Also, the performances and cinematography are well done. However, the narrative structure and the movie’s overall worldview are not so wonderful. For example, it’s difficult to keep up with the narrative because at times it feels like the story is jumping all over the place. Thus, the story feels fragmented and the transitions between scenes are not always smooth. Also, although it does take some shots at some liberal canards, the movie definitely has a strong politically correct, liberal worldview. This is especially true in the movie’s depiction of the homosexual student.