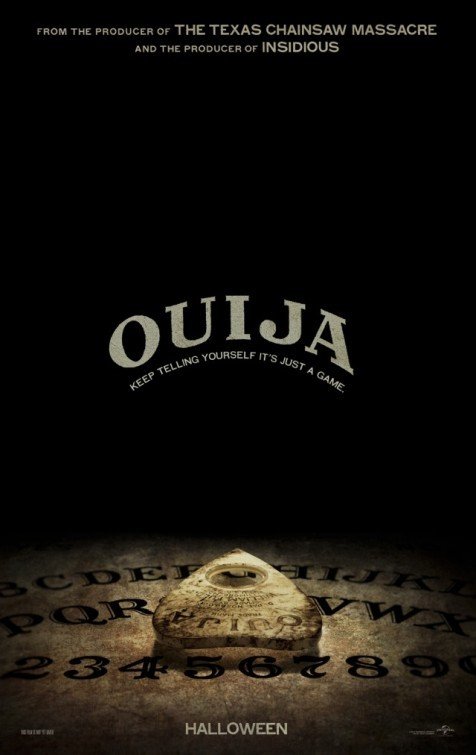 OUIJA is a horror story about playing with an occult Ouija board. When her best friend commits suicide, a high school girl convinces her friends and her sister to use a Ouija board to contact their friend. They don’t know, however, that playing with the board is what led to their friend’s death. It turns out that, by using the board, they’ve all unleashed the demonic spirits of a mother and the daughter she reportedly killed. One by one, the other friends start dying. So, the girl and her sister must find a way to stop the demonic spirits behind the murders.

OUIJA has some scary moments, but the plot is predictable. Also, the teenagers not only play with a dangerous occult device. They also use occult means to defeat the demonic spirits they’ve unleashed. Thus, there’s an occult plot device where the teenagers have to burn both the Ouija board and a corpse to defeat one ghostly spirit, etc. Such occult beliefs are evil. God warns us about them in the Bible. OUIJA is an abhorrent, dangerous movie.

(OOO, B, L, VV, MM) Very strong occult worldview focusing on unleashing demonic ghosts and “spirits” after playing around with an occult Ouija board, with some moral elements of fighting evil ghost spirits and cherishing the value of friendship; four rather light obscenities and five light exclamatory profanities; strong scary violence includes ghost sews up people’s mouths, evil ghost tries to break teenage girl’s arm, but another ghost stops her, teenage boy’s hand hits mirror and is wounded, suicide victim’s body suddenly jumps into frame as she apparently hangs herself near a chandelier using Christmas lights, ghosts attack people, invisible ghost levitates teenage girl’s body and then slams her head down hard onto porcelain sink to kill her, images of corpse with mouth sewn shut, teenage girl knocked unconscious during fight with two ghosts, people’s eyes cloud over sometimes when they see ghost, and ghost appears to possess them somehow, etc.; no sex; no nudity; no alcohol use; no smoking or drugs; and, woman lies to teenage girl about how to get rid of evil ghost, spirits of dead people seem to have demonic and magical powers, teenager tells school counselor he doesn’t know what he’s talking about but doesn’t explain to him why.

OUIJA is a horror story about some high school friends who encounter a couple of deadly demonic ghosts when they fool around with an occult Ouija board. This scary, but somewhat predictable movie shows fooling around with such a thing isn’t a good idea, but the protagonists use occult means to stop the occult evil unleashed by the board and survive.

The movie opens with two young girls, Debbie and Laine, playing with a Ouija board, though Laine doesn’t really want to do it. Cut to the two girls in high school. Unkown to Laine, Debbie has been playing around with an old wooden Ouija board she found in her attic. Something has disturbed her about it, but she won’t tell Laine what’s disturbing her.

Back in her house, Debbie tries to burn the board, but it shows back up on her bed. Something seems to be in the room with her. So, Debbie looks through the glass hole in the board’s wooden pointer or “planchette,” her eye turns milky white. Cut to Debbie dragging some Christmas lights off the family Christmas tree and hangs herself with them.

Eventually, Laine finds the old Ouija board and convinces her friends and her sister to use the Ouija board to contact Debbie. At first, they think they’ve actually contacted Debbie’s spirit, but it turns out they’ve contacted the demonic spirits of a mother and the daughter she reportedly killed. One by one, Laine’s friends start dying, and Laine and her sister must find a way to stop the demonic spirits behind the murders.

OUIJA has some effective scary moments, but the plot is a bit predictable. Were it not for the movie’s occult content, the movie might only rate an Extreme Caution from MOVIEGUIADE®. However, the movie not only shows teenagers playing around with a dangerous occult instrument. It also shows the teenagers trying to use occult means to defeat the demonic spirits they’ve unleashed. Thus, there’s an occult plot device where the teenagers have to burn both the Ouija board and a corpse to defeat one ghostly spirit, etc. Such occult beliefs are thoroughly evil. God warns us about them in both the Old and New Testament. For instance, in Deuteronomy 18:10-12, Moses tells the Hebrews:

Thus, OUIJA is an abhorrent movie that media-wise viewers will avoid.