WHITE BIRD IN A BLIZZARD 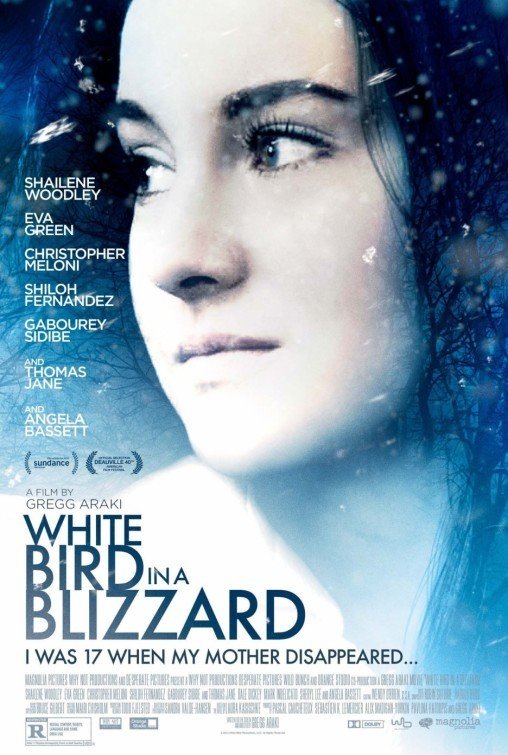 Set in 1988, WHITE BIRD IN A BLIZZARD focuses on 17-year-old Kat, a teenage girl in the midst of her first romance when her mother disappears. As seen in flashbacks, Kat’s mother is a constantly drinking, emotionally distant, cruel person in a loveless marriage. Kat and her dad enlist the help of a police detective to help them solve the mystery of her mom’s disappearance. Meanwhile, Kat engages in dual affairs with both her own boyfriend, a fellow teenager, and the detective, who’s 40-years-old. Kat lies to the detective about her age.

WHITE BIRD IN A BLIZZARD has some nice cinematography and acting, but the story is threadbare. Also, Kat is such a self-absorbed, amoral girl that it’s hard to care what happens to her. Worse, the movie has a strong, abhorrent Romantic worldview containing a dark view of an American family. It throws in lots of lewd content and a homosexual plot twist that feels like a cheap shot against happy marriages. WHITE BIRD IN A BLIZZARD isn’t an appropriate movie for media-wise viewers – or any other moviegoer, for that matter.

(RoRoRo, APAPAP, HoHo, LLL, VV, SSS, NN, AA, D, MMM) Very strong Romantic worldview in story about a 17-year-old girl who becomes sexually active when her mother mysteriously disappears, with a very strong Anti-American view of an American suburban family and a strong homosexual plot twist in one scene; at least 65 obscenities and profanities (included many “f” words), plus several cases of lewd dialogue among teenagers; strong violent scene where a character is choked to death; very strong sexual immorality includes teenage couple become sexually active and “make out,” 17-year-old girl seduces 40-year-old man and they are later seen in bed together, implied oral sex in one scene, married man caught in bed with teenage boy, alcohol imbibing mother acts seductively in front of teenage daughter’s boyfriend, and teenagers have sexual discussions; brief upper female nudity of 17-year-old girl character with teenage boyfriend (the actors are adults in real life); female protagonist’s mother is constantly drinking alcohol and acting seductively in front of daughter’s boyfriend; smoking; and, very strong miscellaneous immorality includes toxic family relationships, teenage girl lies to older man to say she’s 18 and not 17, mother spies on daughter and daughter swears nastily at her when she finds out, and mother says cruel things to husband and daughter.

Kat (Shailene Woodley) is a teenage girl who is in the midst of her first serious relationship when her mother (Eva Green) disappears. As seen in flashbacks, her mother was a constantly drinking, emotionally distant, cruel person in a loveless marriage with Kat’s father (Christopher Meloni).

Kat and her dad enlist the help of a police detective (Thomas Jane) to help them solve the mystery of her mom’s disappearance. Meanwhile, Kat engages in dual affairs with both her own boyfriend, a fellow teenager, and the detective. She lies to the 40-year-old detective, convincing him she’s 18 and legal to have sex with him. Most of these scenes are implied, though there is a graphic scene where she loses her virginity to the teenage boyfriend. Kat also visits a psychiatrist (Angela Bassett) throughout the movie as she tries to process her family’s troubled relationship.

WHITE BIRD IN A BLIZZARD has an impressive cast, led by Shailene Woodley as Kat, who has exploded into stardom with both DIVERGENT and THE FAULT IN OUR STARS earlier this year. This new movie is definitely not appropriate for teenagers, however, as it features positive portrayals of teenage sex in reckless situations.

The cast in WHITE BIRD is packed with better actors than the material deserves, but Writer/Director Gregg Araki (THE DOOM GENERATION and MYSTERIOUS SKIN) shoots the story with beautiful compositions throughout. The colors and imagery throughout are often stunning, with seemingly every shot framed like a work of art. This gives the movie more visual power than its relatively threadbare story deserves, however.

SPOILERS FOLLOW: Ultimately, it’s revealed the father was having sex with his daughter’s boyfriend when the mother caught them in bed together. The mother starts laughed maniacally until the father chokes her to death and buries her in the basement freezer.

Kat is such a self-absorbed, amoral girl that it’s hard to care what happens to her. Also, the surprising revelation of her father’s true nature feels like a cheap shot aimed at seemingly happy marriages. It implies that homosexuality is everywhere, similar to the way that AMERICAN BEAUTY tried to normalize homosexuality in suburbia while showing straight marriages as miserable.

This is undoubtedly Araki’s intention, as he’s rather infamous for being an openly homosexual filmmaker whose career has been built largely on positive portrayals of homosexuality and teenage sex in the context of arty narrative films. Thus, while he does have some filmmaking talent, WHITE BIRD IN A BLIZZARD is not an appropriate movie for media-wise viewers – or any other moviegoer, for that matter.