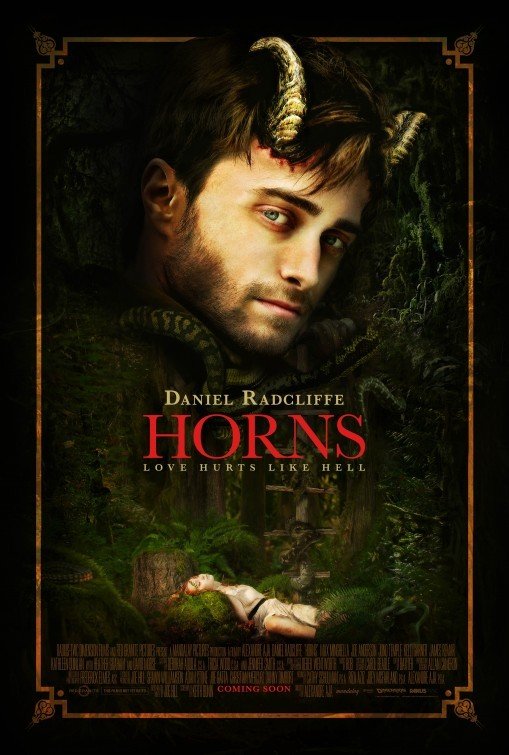 HORNS is an extremely uneven movie that can’t decide if it wants to be a comedy or a horror film. It follows the story of a man accused of murdering his girlfriend who grows devil horns from his head as he tries to clear his name. The man gets mad at God and then starts sprouting the devil horns. As he tries to solve the mystery and clear his name, everyone he meets is suddenly telling him their darkest secrets and sins. This seems to give him enough power to solve the murder mystery.

HORNS veers wildly in tone as it goes from serious scary and sad moments to almost embarrassing attempts at badly acted comedy. The movie’s philosophical and moral messages are more troublesome. The worldview is confused and ultimately pagan, with lots of crude content. The hero mostly seeks revenge. Eventually, he winds up bursting into flames and turning into a giant demon. Then, once he dies, the movie shows him in the afterlife reunited with his girlfriend in an idyllic setting, even though he abandoned God because of her death.

(PaPaPa, AbAb, FRFR, C, Ho, LLL, VVV, SS, NN, AAA, DDD, MMM) Very strong, somewhat confused and confusing pagan worldview with Anti-Christian results overall, but a light positive Christian element and a mild homosexual scene played crassly for laughs; at least 80 obscenities and profanities; very strong, sometimes disturbing and sometimes comical violence with some blood includes a man tries to rape a woman and chokes her before killing her by smashing a rock into her head, same man tries to kill the hero by beating him with a heavy chain, that scene also escalates into fighting and stabbing with a pitchfork in addition to rolling around punching and kicking, and the hero is left barely able to move and then set on fire with gasoline, hero tries to save himself by driving his flaming car into a river, but he drowns (though he comes back to life later), comic scene shows a bartender gong crazy and setting his own bar on fire, snakes bite woman’s arm, teenager loses two fingers while playing around with firecrackers, and TV reporters break into a wild fistfight when the hero tells them to fight each other, and he’ll give an exclusive interview to the last reporter standing; strong sexual content includes two scenes of depicted sex including doctor is frantically fornicating with a nurse while the hero emerges from sedation, and a teenage sex scene flashback between the hero and his girlfriend (who met in a Christian church) that’s portrayed romantically where the girl is seen fully nude from the side, plus hero approaches two male cops and accuses them of being gay and then uses his special mind control powers to force them to admit they love each other as they kiss each other and take their shirts off as the scene fades out; upper and rear female nudity and upper male nudity; alcohol use and drunkenness; no smoking but man snorts cocaine, and hero forces brother to take pills because he thinks brother killed his girlfriend; and, very strong miscellaneous immorality includes friend betrays hero, hero seeks revenge, mean-spirited comments, mean pranks done out of revenge, teenagers play with firecrackers.

HORNS is an extremely uneven movie that can’t decide if it wants to be a comedy or a horror film. It follows the story of a man accused of murdering his girlfriend, who grows devil horns from his head as he tries to clear his name. HORNS has a very strong, confused pagan worldview with strong Anti-Christian elements, some confusing theology, and a crude homosexual scene.

The movie follows Ig Perrish (Daniel Radcliffe), a young man head over heels in love with his girlfriend (Juno Temple). She is found dead in the woods, and all suspicion is immediately cast upon Ig. This leads to a tabloid-media frenzy that is effectively satirized early in the movie. When Ig wakes with horns sprouting out of his skull one morning, everything goes haywire both in his own life as a character and in the movie itself overall.

It would make sense if Ig grew horns and was in fact evil, but he states his innocence from the beginning. Also, the movie centers on his quest to find the real killer. As he tries to solve the mystery and clear his name, Ig finds that everyone he meets is suddenly telling him their darkest secrets and sins.

HORNS veers wildly in tone, almost from scene to scene, as it goes between serious moments of scariness or sadness that work well, to almost embarrassing attempts at comedy that are so overplayed and badly acted that they merely offend rather than amuse on even a basic level. It’s a shame, for the movie does have some very strong moments in childhood flashbacks that are wonderfully shot and acted and that one wishes were in an entirely different storyline and movie.

However, the philosophical and moral messages of this movie are particularly troublesome. Perhaps the point is to create a metaphor of how the world often jumps to conclusions about whether an accused criminal is evil. Then, however, when the hero clears his name and still winds up a bigger devil than ever, this particular allegory is hard to consider seriously. Furthermore, the hero’s revenge tactics, including forcing his brother, who is innocent of the murder, to ingest copious amounts of illegal drugs, are so mean-spirited and ugly that the attempt to make such scenes funny is ultimately unforgivable.

It’s easy to see why the role of Ig appealed to Daniel Radcliffe after a decade of playing Harry Potter in eight films, since the movie attempts to be funny, sad, scary, romantic, and more. However, HORNS fails on most of these fronts, leaving this a failure for Radcliffe despite his attempts at a zesty performance.

That failure is emblematic of the movie as a whole, which is ambitious and definitely original in its concept and some specific scenes, but which eventually fails. Regardless of its artistic ambitions, HORNS has far too many moral and theological problems to justify any Christian viewing it even though it has a couple positive church-based scenes.

For example, the hero meets his girlfriend in church, and the movie portrays her pretty favorably, even though they fornicate. Then, however, when she is murdered, the hero in frustration kicks a statue of Mary the mother of Jesus at a memorial site for her, and the statue breaks in two. He also says that his girlfriend always prayed, went to church and believed in God, but “it still didn’t help her.” It’s after this scene that the hero begins to sprout his demon horns.

Also, for instance, at the end [SPOLERS FOLLOW], the hero seeks a final battle of revenge against the actual killer. Eventually, the hero winds up bursting into flames and turning into a giant demon. Then, once he dies, the movie shows him in the afterlife reunited with his girlfriend in an idyllic setting, leaving viewers to wonder whether he’s actually made it to Heaven despite the fact he died as a demon.

HORNS ultimately is confused and abhorrent as well as spectacularly uneven. It also has excessive crude content, violence and substance abuse.