"A Psychological Game of Admiration and Respect " 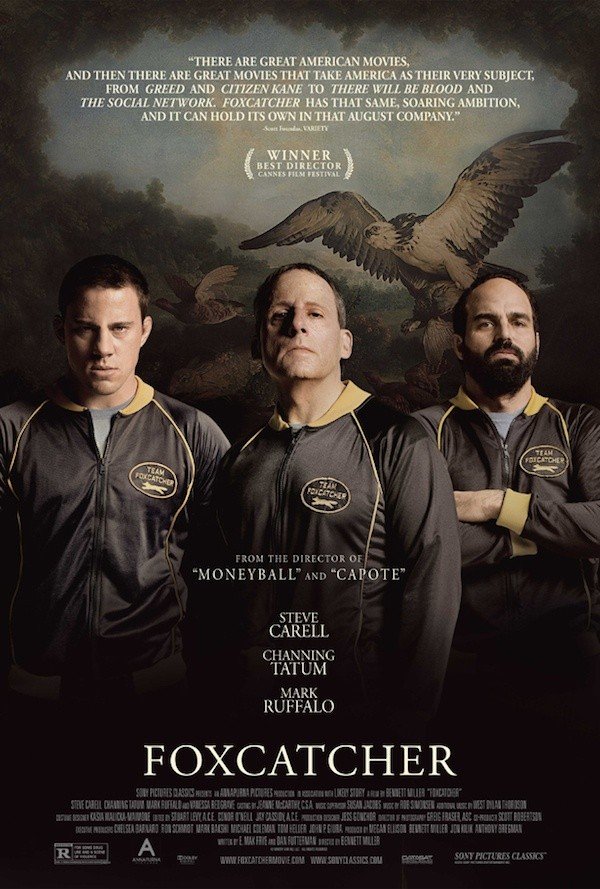 FOXCATCHER is a terrifying drama based on true events in the 80’s about family, admiration and the devastating affects of mental illness. Ever since they were young, brothers Mark and Dave Schultz have always relied on and looked out for each other. Together, they become gold medalists in Olympic Wrestling, but Mark, the younger brother, feels overshadowed by Dave. When Mark gets the chance to train under John du Pont, a wealthy, eccentric man, he jumps at the offer. However, a psychological game between Mark, John and Dave pushes John’s mental state over the edge.

FOXCATCHER is a deeply disturbing, poignant tale. The acting by Steve Carell as John du Pont and Channing Tatum and Mark Ruffalo as Mark and Dave is terrific. FOXCATCHER is a tragic morality tale. It has some moral, redemptive elements, especially in Dave Schultz, who shows love for his brother and family. Meanwhile, John and Mark are selfish and ambitious, seek unhealthy admiration, and are ignorant about their own instability. FOXCATCHER has no lewd content, but brief violence, drug use and the story’s dark nature warrant extreme caution.

(B, C, P, APAP, L, VV, N, A, DD, M) Light moral, redemptive worldview where moral values shown in one character that shows unconditional love for his brother and family, strong messages against selfish ambition, characters seek unhealthy admiration, are ignorant to the point of their own psychological harm and the dangers of ignoring mental illness in others, plus one character speaks of his patriotism many times, but he’s portrayed as misguided and confused; two obscenities and one profanity, a man vomits and urinates in a toilet; light wrestling violence, man smashes his own head into a mirror and shards of glass stick out of his forehead, a man is shot three times to death; no sexual content; naturalistic upper and rear male nudity; moderate drinking; cocaine addiction; and, men’s loyalty and obedience is bought with money.

FOXCATCHER is a terrifying, slightly fictionalized drama based on true events in the 1980’s about family, admiration and the devastating effects of mental illness.

Ever since they were young, brothers Mark and Dave Schultz have always relied on and looked out for each other. Together, they become accomplished athletes and gold medalists in Olympic Wrestling at the 1984 games, but Mark (Channing Tatum), the younger brother, always feels overshadowed by Dave (Mark Ruffalo). The brothers are intensely close to one another, but Dave now has a wife with two kids and must focus on them. Living off a measly coaching salary, Mark is mostly alone.

One day, Mark gets a call from the du Pont estate, one of the richest family dynasties in America, asking for a sit down meeting with John du Pont (Steve Carell). Mark is flown to the du Pont mansion in Pennsylvania. John, a quiet spoken and eccentric older man, explains to Mark his passion for the sport of wrestling and how he’d like to coach the American team that will go to the 1988 Olympics in Seoul. John explains he’d like to give America hope, and, that through his guidance, he’d be able to lead Mark to victory. Mark would be paid and would be allowed to choose his own team, including his brother Dave. Excited by the opportunity, Mark agrees to join du Pont, but Dave refuses to uproot his family to move, so the brothers separate.

As John du Pont takes Mark under his wings, John begins to receive the admiration and loyalty that Mark had for his brother Dave. As the two become close and Mark slips into a drug problem that affects his wrestling, John convinces Dave to join the Foxcatcher wrestling team to get them back on track toward the Olympics. John’s new partiality toward Dave deeply angers Mark, who feels betrayed. The psychological rift and deep emotional wounds between John and Mark are inevitably transferred to Dave, who tries to understand their relationship and protect his troubled brother. What results from this odd and completely unhealthy relationship between John, Mark and Dave is a tragic murder.

FOXCATCHER is a deeply disturbing, but poignant tale. It involves a psychological game where a man with money and power looks for admiration from a man who needs care and affection but is a bit jealous of his older brother. Director Bennett Miller (MONEYBALL) includes rich detail and shows incredible restraint, choosing the power of image and action rather than words. Both Steve Carrell and Channing Tatum break out of their individual casting stereotypes with daunting performances and nuanced portrayals. The story is slow in pace, but chilling throughout.

Playing out more like a tragic morality tale, there are moral, redemptive elements in FOXCATCHER, especially in Dave Schultz, who only ever shows love for his brother and family, even when Mark is cold toward him. Dave is even willing to put his job on the line and be honest with John for the sake of Mark. Meanwhile, John du Pont and Mark are selfish and overly ambitious, seek unhealthy admiration, and are ignorant about their own growing psychological instability. What’s most saddening is that no one intervened to end John du Pont mentally unstable antics and get him some help. FOXCATCHER has no lewd content, but the brief violence, drug use and the story’s dark nature warrant extreme caution.