"A Dull Adaptation of a Complex Man" 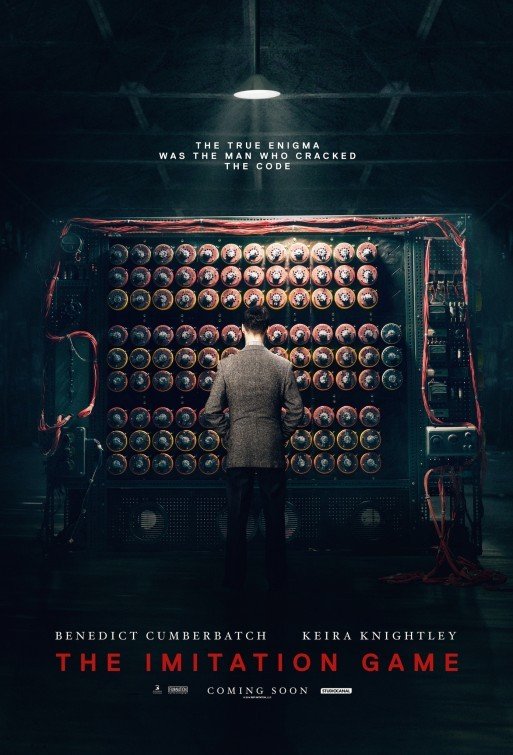 THE IMITATION GAME is a fascinating, but stilted, historical drama about the life of Alan Turing, a brilliant mathematician who helped end World War II, but was eventually charged with gross indecency because of his homosexuality, leading to his eventual suicide. The movie primarily focuses on Turing working for the British government to crack the German’s encrypted communication machine, the Enigma, with the help of his team. When they do crack the code, they are forced to keep it a secret, but Turing’s hidden desires are eventually found out.

HE IMITATION GAME is tragic in more ways than one. Alan Turing undeniably shortened the war and saved millions of lives. Also, the British government failed to respond to his sinful desires in a Gospel, restorative way. Benedict Cumberbatch embraces the complexities of Turing and never lets the audience forget the man’s genius, but the weak, confused storytelling holds the movie back from being truly powerful. Other than some language, THE IMITATION GAME is fairly clean, and even offers some light positive messages, but its hopeless, humanist worldview is ultimately a confused mess.

(HH, HoHo, PCPC, Fe, B, P, AbAb, LL, V, S, A, D, M) Strong bleak humanist worldview with no hope or redemption where main character is a homosexual, with politically correct tone, plus some feminist concerns, plus light moral, patriotic values in the main characters desire to end World War II and their resolve to do it through teamwork, but Anti-Christian content as a traitor among the Allies is a Christian and main character says, “God didn’t win the war, we did”; four obscenities and 13 profanities; some implied war violence with some bombardment aftermath shown, a man is punched; some vulgar, though vague, sexual references and main character is a homosexual; no nudity; moderate drinking; smoking; and, lying and moral relativism.

THE IMITATION GAME is fascinating, but stilted, historical drama about the life of Alan Turing, a brilliant mathematician who helped end World War II, but was eventually charged with gross indecency because of his homosexuality. This led to his eventual suicide.

Beginning in 1952, Alan Turing (Benedict Cumberbatch) reports a burglary in his home, though nothing is seemingly stolen. An investigator suspects Turing is hiding something, so he decides to dig deeper. After coming up empty-handed, the investigator decides to bring Alan in for questioning hoping to get some answers. Turing obliges him.

In 1939, Turing applies for a secret job at Buckinghamshire, England. An experienced mathematician and cryptographer, Turing gets the job. Cdr. Alastair Denniston explains that the Allied Forces have failed to crack Germany’s National Socialists Enigma machine, which encrypts all of Germany’s communications.

Turing, along with five other men, have been selected to crack the Enigma under the supervision of MI6, and hopefully end the war. Turing refuses to be a team player, however. Instead, he pursues his own plan to engineer an electro-mechanical code breaking machine that can decipher all the potential code variations. Overstepping his bounds by sending a letter to Winston Churchill, Turing gets permission to fire certain team members and to pursue his costly, unprecedented plan.

With the help of MI6, Turing also brings in some help by putting a complex crosswords puzzle in the paper. Turing finds Joan Clarke, a brilliant and beautiful young woman to help him. As stress mounts to get the machine working before the government shuts him down, he’s forced to reveal to Joan, his now fiancé, that’s he’s a homosexual.

In further flashbacks, the movie shows Turing as a 15-year-old schoolboy who struggles with being different and starts developing feelings for his best friend Christopher, who encourages him while being bullied.

THE IMITATION GAME is tragic in more ways than one. Alan Turing undeniably shortened the war and saved millions of lives. Additionally, the movie uses his unfortunate death as a statement for a leftist political agenda. In regards to his homosexuality, the British government wronged Turing in strong-arming him into undergoing chemical castration. Of course, the only real solution for the lust of the flesh and the pride of life is the Gospel of Jesus Christ.

Most of IMITATION GAME rightfully focuses on the mission of cracking the Enigma code. This, and Turing’s research, is by far the most compelling part of his legacy. Regretfully, the viewer doesn’t really get to see his legacy played out or pursued. Rather, the filmmakers veer into a confused conclusion regarding his sexuality. Turing’s motivations are never explored or explained. So, by the movie’s end, it’s clear that Turing himself was an Enigma of sorts. So, instead of truly trying to crack him, the filmmakers use his tragedy to push their own agenda. It’s also worth noting that many believe Turing didn’t commit suicide, but in fact poisoned himself accidentally since he regularly had cyanide at his home for scientific experiments.

Benedict Cumberbatch embraces the complexities of Turing and never lets the audience forget the man’s genius. Keira Knightley is well cast as the charming Joan Clarke, but ultimately, the role falls into a feministic cliché, and the script really doesn’t do her justice, even in regards to the sex discrimination she encountered as a woman. Jumping all over the place, the script never offers anything tangible and lacks real emotional pull. In the end, even the great performances can’t save THE IMITATION GAME. Some horrendous CGI of the war is ultimately the straw that breaks the camels back for this movie.

Other than some language, THE IMITATION GAME is fairly clean, and even offers some light positive messages, but its worldview is ultimately a confused mess.